From Bamiyan Afghanistan to Buduruwagala in Sri Lanka

My journey has taken me from Lumbini in 1975, the birthplace of Buddha, to Bodh Gaya where he attained enlightenment,  to Bamiyan to see the huge sculptures in rock of Buddha, before they were destroyed by the Taliban, and recently, I stumbled across the astounding Buduruwagala Sculptures in Sri Lanka, a photo above.

The seven colossal figures carved out of a rock face at Budurawagala are reached by a side road to the west, five kilometres south of Wellawaya, on the road to Tissa, are simply stunning. Tragically after the destruction of the Bamiyan figures, the largest carvings of Buddha are now in Buduruwagala, Sri Lanka.

The rock itself resembles a kneeling elephant with its head bowed and the end of the folded trunk in its mouth.


Neither chronicles nor stone inscriptions provide any information on the exact period of these east-facing statues. However, it has been determined that they date back to the 10th Century and the Mahayana Buddhist Doctrine, and belong to the latter period of the Anuradhapura Kingdom. It is believed the Buddha statue was created during the reign of King Valagamba.
The name Buduruwagala means "stone images of the Buddha," and at 51 feet here stands the tallest in Sri Lanka and perhaps in the world, since the Bamiyan figures no longer exist in Afghanistan. The sculpture at Buduruwagala is in lower relief unlike the other comparable Buddha statues in the country at Aukana (46 ft), Saseruwa (36 ft) and Maligawila (36 ft) and for all of which it may have served as a model.

Taller Buddha in 1963 and in 2008 after destruction. Photo courtesy Wikipedia

At Buduruwagala the Buddha statue is in the centre with groupings of three figures on each side. Only the portion above the waist is finished, the lower part being in rough condition. The raised right hand shows the fingers in abhaya mudra position, the posture of kindness and freedom from fear. What remains of the his robe‹fragments of the original stucco and the traces of orange colour‹suggest the images were all once painted.


By the right foot of the statue is a hole carved in the shape of the flame from an oil lamp. From this hole percolates an oil that smells of mustard which was used by adherents to anoint their foreheads before presenting themselves to Tara Devi or Vajrapani to solicit cures for their ailments through sathiyakriya, the use of the power of truth.
The central figure in the group of three to the Buddha's right still retains much of its white finish. This is the Bodhisattva Avalokitesvara who, in Buddhist mythology, granted succour to the helpless, and was named God Natha during the Kotte Period. The lower part of the figure is clothed with a robe and ornamentation, and in the centre of the crown is a figure of the Buddha in meditation.

The female figure to his left, in low relief and the typical thrice-bent posture, is Aryathara (Tara Devi), who was believed to have the power to prevent earthquakes, floods, epidemic diseases and other calamities, and who was particularly helpful to women. 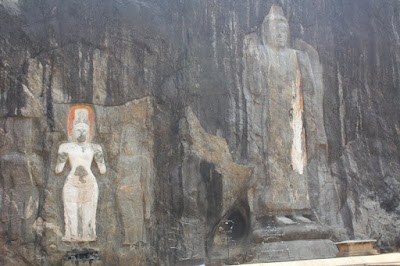 The figure to the right of Avalokitesvara is prince Sudhana. He is also in the typical thrice-bent posture. His is the ability to steer the young on to the right path of good behaviour.

The central figure in the group of three to the Buddha's left is Maithri Bodhisathva, the fifth Buddha for this aeon. The figure has a crown, ornamentations and a robe.

To his left is Vajrapani (God Sakra) who is holding the hourglass-shaped Tibetan thunderbolt symbol, the dorje, made of quartz. This indicates the sculptures are of the time when the worship of Bodhisatvas and statues was introduced by the Mahayana Sect, and is an unusual example of the Tantric side of Buddhism in Sri Lanka..

The figure to the right of the Bodhisathva perhaps represents Sahampath Brahma. The part above the waist is very smoothly worked, but the rock below is roughly hewn. It is possible that the lower parts were once covered in painted finery.
I can strongly recommend a visit to the Buduruwagala Sculptures.


This visit to Buduruwagala also helps me connect the research I did during three longs winters in Kabul 1993-96 on Faxian, Xuanzang, and Yijing who were among hundreds of Chinese monks who made pilgrimagesmto India  andf sometime sri Lanka, during the first millennium CE. The detailed accounts of their journeys make them more famous than others. These travel records are important historical resources for several reasons. First, they provide meticulous accounts of the nature of Buddhist doctrines, rituals, and monastic institutions in South, Central, and Southeast Asia. Second, they contain vital information about the social and political conditions in South Asia and kingdoms situated on the routes between China and India. Third, they offer remarkable insights into cross-cultural perceptions and interactions. Additionally, these accounts throw light on the arduous nature of long-distance travel, commercial exchanges, and the relationship between Buddhist pilgrims and itinerant merchants
Faxian route in 337-422?
So it has been a pleasure to continue my journey through Buddhism, the Silk Route and the Chinese pilgrims to this part of the world.