Who will win the Rugby World Cup Finals ?

So now we have three New Zealand coaches in the semifinals and unbelievably, the same final four sides as in 1987.

What we have seen is that it is mindsets that wins quarter final rugby, not game plans. The young Australian team believed they could do it, and they did. Not pretty rugby though. Many rugby writers are saying "South Africa absolutely did not deserve to lose to Australia, but the Diggers deserved to win because they dug deep and refused to surrender."  South Africa did not have someone with the game-breaking talents and skills of  James O'Connor or a player that tackled and defended like Pocock, nor the genius of Genia.

The Welsh seemed to have a stronger mental attitude on the day and you could see and feel Gatlin's tenacious attitude coming through in every aspect of the Welsh game, as they tackled early before the irish could gather speed, and defended in such an instinctive manner. 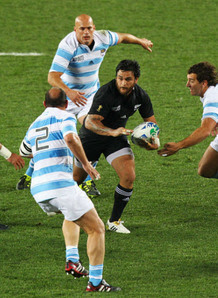 In this mornings rugby websites most are picking Wales to win the finals, but they forget France needed just the first 40 minutes to send the English home packing. My colleague in New Delhi  John Roche was writing before the quarter finals that Wales would be playing South Africa in the finals. A number of my Irish friends label the All Blacks as 'chokers' and I think it has to do with some village Irish team that beat the All Blacks on an off day way back in the last millenium. My neighbour and hotel manager Jerome who lives in my apartment block, told me after the All Blacks thrashed France by 20 points a few weeks nack, "we will see you in the finals." Jerome is half way right thus far.

Argientina are always tough and they gave the All Blacks the semi final workout they needed. Even with both Dan Carter and now second string five-eights Colin Slade out injured, the replacement Aaron Cruden played well for the 50 minutes he was on the ground. With man-of-the -match Piri Weepu playing inside him, I feel Cruden can outfox the mecurial Cooper. But one has to wonder why Henry didn't recall Nick Evans. The All Blacks have the talent and strength  in the pack to dominate the Australian scrum, and heaps of speed in the backs to outscore, but it won't be easy. I predict a close encounter.

Roll on this weekend for we are in for a feast of rugby where we'll see minds winning over games plans,  increasing injuries as weary bodies and bandages buckle under these bruising encounters, but we will all be on the edge of our seats hoping our teams will win. At least there will be one New Zealand coach in the final !   And, I am picking a NZ vs France final with NZ taking the WWE trophy.
Posted by Bob McKerrow - Wayfarer at 20:40

Quite helpful information, thanks for your article.

You really make it seem so easy with your presentation but I find this matter to be actually something that I
think I would never understand. It seems too complicated
and extremely broad for me. I'm looking forward for your next post, I will try to get the hang of it!

my blog ... diets that work

You attain full value for the money which you put in to access when you seek who can write my research paper, as well as other types of best writing services from our firm which include dissertations, theses, reviews any different writings.