THE END OF CHEAP FOOD? 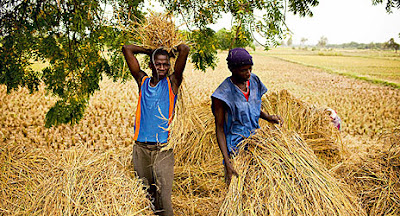 The ONAHA is planning to develop a rice sorter machine which avoids the loss of 10% of production compared to traditional techniques. Farmers working with the traditional method in the Saga paddy field. Julien Goldstein/IFRC

A new round of food inflation and severe hikes in the price of basic foodstuffs such as rice, maize, wheat, oil, sugar and salt is plunging many of the world’s poorest people, including millions across the Horn of Africa, into deeper poverty and into situations of severe hunger and malnourishment. This is one of the findings of the annual World Disasters Report 2011 launched today in Colombo, Sri Lanka. The worst hit are poor people who typically spend between 50 and 80 per cent of their incomes on food. 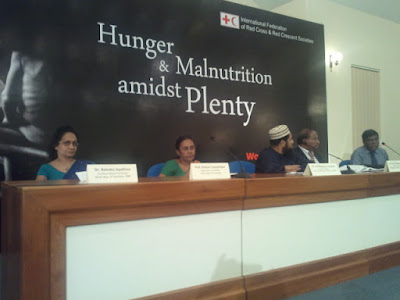 A panel discussions of experts at the IFRC World Disasters Report 2011  launch in Colombo 20 October 2011. The topic was ob hunger and malnutrition. Photo: Bob McKerrow
“Food prices are hitting the alarming highs of the 2008 crisis, with the poorest of the poor being hit the hardest,” said President of the Sri Lanka Red Cross Society Jagath Abeysinghe. “It’s profoundly concerning that we seem to be going backwards in terms of ensuring basic food is available and affordable” he added.

Speculative commodity trading, rapidly growing populations, climate change and a sharp decrease in domestic agricultural production due to lack of appropriate investment and ineffective governance, are just some of the leading causes fuelling a new round of food inflation concludes the report.

More investment in agriculture is essential, but the reports questions whether this investment should target smallholders and pastoralists or encourage capital-intensive, large-scale farming. There is increasingly widespread agreement that smallholder farming could be the best way forward in Africa.

“Governments and donors should invest more in agriculture and give a helping hand to farmers,” says Bob McKerrow, the Head of Delegation of the IFRC in Sri Lanka. “It’s not just food that is becoming expensive, the price of new technologies, seeds, fertilizers and fuel needed to transport food is also going up. We need to boost the agricultural sector as a way of protecting people who find themselves at the mercy of inflation and the global stock markets.”

Meanwhile the Director General of the Sri Lanka Red Cross Society Tissa Abeywickrama also raised the need for adaptability amidst rising food prices. “It seems the global volatility of food prices is here to stay, and the era of cheap food is over, “ said Abeywickrama urging governments and donors to ensure that the most vulnerable people are better prepared to cope with unstable agricultural markets and volatile food prices.
Posted by Bob McKerrow - Wayfarer at 20:49

Many people argue that eating too many plants grown with commercial fertilizers or
pesticides can cause health problems. In addition, fertilizer restores to the
soil nutrients that are absorbed by years of growing the same vegetable plants in the same location.
Subtle gardening themes act upon the subconscious, and merely give the observer a pleasant feeling.

A single can conveniently understand to use this plan in
few minutes. Obtaining an OBD II scan tool on the net shouldn't be a scary encounter.

I think this is one of the most important information for me.
And i am satisfied reading your article. However wanna statement on some
general issues, The site taste is great, the articles is
really excellent : D. Excellent process, cheers

An excellent post! Just wondering if anybody has any any links or screenshots of good Email Templates
used? It really is good to see templates, one more thing to see examples to benchmark as good communication.
Would be willing to see any links.

Thank you for another fantastic article. Where else may anybody
get that type of info in such a perfect manner of writing?
I've a presentation subsequent week, and I am at the look for such info.

The first step in cheap essay writing service USA is the choice of topic. The topic that is chosen by the writer determines the quality of the paper. Contact our Custom Research Paper Services company today!

Are you looking to hire the best Custom Research Paper Services? It is tedious and overwhelming crafting Research Paper Assistance Services for learners, Custom Dissertation Writing Service can be basic complex with detailed instructions from the teacher.

In India, Dream11 is a popular fantasy cricket app. When you download the Dream11 app on your phone, you can get a welcome bonus of up to INR 200. Use the Dream11 referral code and earn a bonus.

The information you shared through your post is functional.
I admire your work.
Wish you all the luck for all your blogging efforts.

Hello, I have browsed most of your posts. This post is probably where I got the most useful information for my research. Thanks for posting, we can see more on this. Are you aware of any other websites on this subject

The Personal Care Wipes Market is projected to record a CAGR of 5.4% during the forecast period (2020-2025). The personal care wipes market is segmented by product type that includes baby wipes, facial wipes, hand and body wipes and personal hygiene wipes. Based on distribution channels, the market is divided into supermarket/hypermarket, convenience stores, specialty stores, online stores, and other distribution channels. The study also involves the global level analysis of regions, such as North America, Europe, Asia-Pacific, South America, and Middle-East and Africa. The baby personal care wipes segment is anticipated to witness significant demand due to the disposable nature of baby wipes and act as genital cleansing agents.

IGNOU Grade Card is not a result, it’s just a statement of a student during the year how he/she performed in assignments, theory or practical. Candidates can download grade card from the official website of IGNOU. They just need to login and select the program which they have selected enter enrollment. If students are not satisfied with the marks in the grade card they can go to the branch for revaluation.