Mythical, something from a remote, wild and innocent past - something Greek. 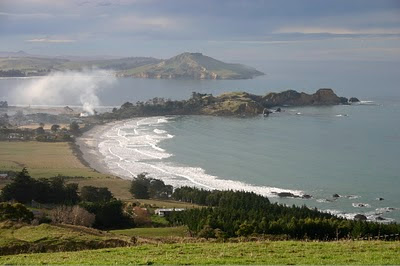 Bounding over the Otago hills there was something mythical, something from a remote, wild and innocent past - something Greek. We used to run down these hills and dive into the cold surf after a 40 km training run. 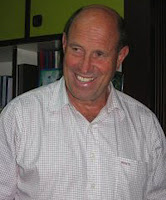 Riccarton High School engages in a winter and summer sports exchange with Kaikorai Valley College in Dunedin. That year of 1962 my billet was said to be a pretty good miler. I was the Riccarton school champion in everything from 440 yards to the mile and thought I would have no trouble putting him in his place. In the back straight on the last lap he put the screws on and went past me like a tank in overdrive. "Keep calm", I told myself. "Just stick on his tail and use your speed in the last 50". But when I hit the last 50 he was has already across the line and soaking up the applause. His name was Brian Taylor. (photo: left)

We became friends. After the sports day we put on our glad rags and went out partying. I drove my pride and joy, my 1937 Ford 10, and Brian sat in the back playing "If I had a Hammer" over and over on his guitar as if it were the only tune he knew. It was.

Next time we met was at the inter-university tournament the following year. This time I was billeted with Brian in Dunedin and I met his parents and sister Suzanne. Brian could now play a selection of Beatles songs - I especially remember "I Should Have Known Better" (I should have, as you will see) - so he was making progress on more fronts than one. He was now a solid promise in New Zealand middle distance running. Once again he won the mile by half a lap, but by then I had decided that discretion was the better part of valour and entered the 880 instead. We went partying, of course, and at 4 o'clock in the morning, quite the worse for wear, I smashed my Ford into the front of a milk delivery truck. A total write-off. However, Brian's guitar was the only casualty apart from the car. The girls we were with wobbled away in a taxi and we were left facing a wreck and an irate milkman. "Don't worry mate", slurred i, "Dad's a lawyer. He'll get you out of this one".

And as it turned out, he did. That was when I really got to know Warrington Taylor. He listened to my version (the truth, I was drunk in charge and didn't know what side of the road I was on) with an amused but affectionate smile and then announced his opinion: "Well young man, it looks like your goose is well and truly cooked". But over the following months he wrote the right letters and signed the right depositions and got me off the hook, for if I had had to pay the damages the milkman claimed I would have ruined my own father. Dealing with Warrington Taylor's subtle ironic intelligence during those months taught me lessons I have never forgotten, and he made me a special gift of one aphorism (I later found its source in Oscar Wilde) he buried in my mind forever: the pure and simple truth is seldom pure, and never simple. 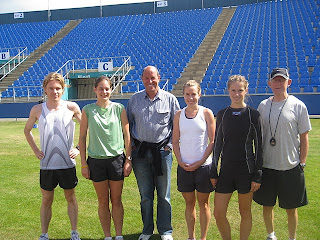 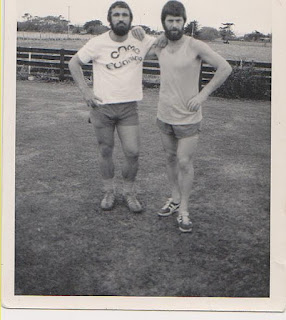 Left: Bob McKerrow and Neville Cleveland who were part of the team that trained under Brian Taylor at Karitance camp on successive years- 1963-65.

Brian, meanwhile, was knocking on the door of the sub 4-minute mile, a feat reserved for the international elite in those days. He was the golden boy of Otago athletics, but none of that affected him as a person. For several years he called me his best friend even though my own interest in competitive athletics was waning. When we took long runs together (long, for Brian, began at 20 miles) he had the decency not to wait for me over the last stretch, and when I dragged my aching legs to the nearest pub there he was, waiting eagerly for the deep philosophical conversations over endless jugs of Speights. And the jokes. And the all-night parties in sordid flats enlivened by his new guitar (now into Bob Dylan). And Karitane. Through Brian I met Bob McKerrow, Neville Cleveland, Rob Urghart and Graeme Lockett at the Karitane training camps, influential events on the lives of all of us as Bob explains somewhere else on this blog. Maybe nothing in my life has ever again achieved the purity of those sun-drenched days. Bounding over the Otago hills there was something mythical, something from a remote, wild and innocent past - something Greek - in the marriage of sheer physicality and intellectual curiosity that melded our disparate personalities into an indivisible whole. And the vital fulcrum of all that was Brian, who, in spite of his lack of some of the talents or traits that marked us as individuals (Bob's adventurous spirit and disdain for authority, Graeme's romantic bond with nature, my intellectual hunger, perhaps) he was the undisputed leader as every phalanx must have a leader, and not only because he could run us all into the ground. One could analyse the reasons - instinctive understanding of group dynamics, innate respect for each individual... but the real reason is as simple as it is unattainable by any act of will: Brian loved us all, unconditionally. And it is the heart that remains nearly fifty years later when the splendid limbs have turned to dust, as bright and as warm as it was the day he destroyed me on the back straight at Riccarton High.
Posted by Bob McKerrow - Wayfarer at 18:13

Wonderful memories and a beautiful tribute written by Jim.
May your friend rest in peace Bob.

I was so moved by what jim wrote about my late friend Brian. I hope your day went as well as could be expected yesterday. Thinking of you. Bob

They need to see doctor for some advices
on how they can take control of their blood pressure.
Predominantly the computer software will endeavor to lure you into paying
for non-existent software program to clear away the viruses that
are infecting your Computer. Company Name: Fayette Chiropractic Center Address: 126 New
Hope Road, Fayetteville, Georgia 30214 Contact Telephone Number: (770) 461-2225 Fax Telephone Number:
(770) 461-0186 Email: info@fayettechiropractic. The following
year, at the age of thirty-eight, he matriculated at the Louisville Dental College in Kentucky,
where he remained until he was graduated. o - Focus on the optometry practice (no ambition
to supply a retail eyewear answer).

This kind of mulch s also more natural looking than other mulch choices out there for the delicate look of flower gardens.
Owning a regular lawn mower does not mean you have to give up on
mulching
your yard; you just have to be willing to do some work.
Depending on the density of the mulch, one should lay two to six inches
of mulch over topsoil in the vegetable garden.

Whether you are searching for specialty styling products or specific Loreal hair products, you are sure to find what you
need. Likewise, using imported shampoos and conditioners from
a tropical country when your climate is cold
and temperate is not such a good idea. The professional hair merchandise of Loreal are effectively currently being sold all more
than the world in about one hundred thirty different countries.