Having spent considerable time in the Arctic, and on a successful North Pole expedition in 1986  using dogs, I have a deep concern about the effects of climate change in the Arctic. I was delighted to see this article on the BBC website by Jonathan Amos Science correspondent, BBC, about Cryosat spots Arctic sea-ice loss in autumn. An outstanding article by Jonathan Amos.

The dramatic recent decline in Arctic sea-ice cover is illustrated in new data from Europe's Cryosat mission.
The spacecraft, which uses radar to estimate the thickness of marine floes, has observed a deep reduction in the volume of ice during autumn months.
For the years 2010-2012, this is down a third compared with data for 2003-2008.
For winter months, the fall in volume is not so great - down 9% over the same period.
A lot of thicker ice appears to have been lost from a region to the north of Greenland, the Canadian archipelago, and to a lesser extent the northeast of Svalbard.
Continue reading the main story

We have become accustomed to the big retreats in sea-ice area that occur in summer. Last year saw the smallest extent yet measured in the satellite era.
But the latest Cryosat report gives an indication of the status of the floes during the months when the seasonal re-freeze occurs with the advance of colder temperatures.
"We've only been in orbit with Cryosat for two complete winters, and so it is not possible at the moment to discern any long term trends," explained mission scientist Dr Katharine Giles, from the Centre for Polar Observation and Modelling (CPOM) at University College London, UK.
"But as the mission moves forward we will get more and more information and that will help us describe better the patterns that are emerging."
Cryosat was launched by the European Space Agency (Esa) in early 2010.
It is what is known as an altimetry mission, using advanced radar to measure the difference in height between the top of the marine ice and the top of the water in the cracks, or leads, that separate the floes.
From this number, scientists can with a relatively simple calculation work out the thickness of the ice.
Multiplying by the area gives an overall volume, and it is the volume that is likely to provide the most reliable assessment of the changes now underway in the Arctic.
Continue reading the main story


How to measure sea-ice thickness with a satellite altimeter 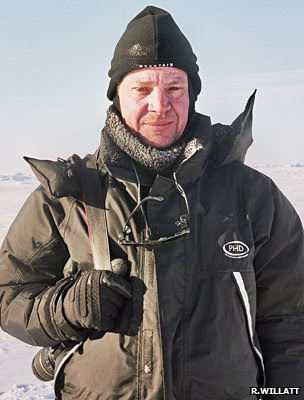 Seymour Laxon pioneered the techniques that made Cryosat observations possible
"Thin ice grows more quickly than thick ice in the winter. Ice acts as an insulator - the thinner the ice, the more heat can be lost to the atmosphere and the faster the water beneath the ice can freeze," Dr Giles told BBC News.
"But even with an increased ice growth during the winter, we can see from the Cryosat data that it's still not fully compensating for the deep summer melt."
Cryosat's altimetry observations agree well with independent measures of sea-ice thickness derived from aircraft surveys and under-ice moorings.
They also look very similar to the simulations coming out of Piomas (Pan-Arctic Ice-Ocean Modelling and Assimilation System), an influential computer model that has been used to estimate Arctic sea-ice volume and which has been the basis for several predictions about when summer sea ice might disappear completely.
"The decline predicted by Piomas is slightly less in the autumn and slightly more in winter, but broadly speaking there's good agreement," said Dr Giles.
A paper describing the latest Cryosat results has been published online in the journal Geophysical Research Letters.
Its lead author was UCL's Seymour Laxon, the renowned polar scientist who tragically died following an accident on New Year's Day.
Prof Laxon solved the problem of separating ice from water in the satellite altimeter signal.
This has allowed scientists to retrieve information about the Arctic Ocean region's gravity field, its surface circulation, and the thickness of its sea-ice cover.
More recently, his techniques have begun to reveal how the changing ice cover might affect the interaction between the Arctic Ocean and the atmosphere."Seymour's work provided evidence with which to propose and eventually launch the Cryosat mission, which is now - as his last paper describes - providing the first observations of the annual cycle of sea-ice growth and decay throughout the Arctic Ocean," Dr Giles said.
Jonathan.Amos-INTERNET@bbc.co.uk and follow me on Twitter:@BBCAmos
Posted by Bob McKerrow - Wayfarer at 19:58

Hello there! I know this is kind of off topic but I was
wondering which blog platform are you using for this
website? I'm getting sick and tired of Wordpress because I've had
issues with hackers and I'm looking at options for another platform. I would be awesome if you could point me in the direction of a good platform.

Look at my weblog - business opportunities and ideas

It's a shame you don't have a donate button! I'd certainly donate to this outstanding blog! I suppose for now i'll
sеttle foг bοok-marking and adԁing
your RSЅ feed to my Goοgle account.
Ι look forwaгd to new updates and ωill talk about thіs blog wіth
mу Facebook gгoup. Talk soоn!

What i don't understood is actually how you are now not really a lot more well-appreciated than you may be right now. You are so intelligent. You recognize therefore significantly when it comes to this subject, produced me for my part believe it from numerous various angles. Its like men and women don't seem to be fascinated except
it is one thing to accomplish with Lady gaga!
Your own stuffs outstanding. Always take care of it up!