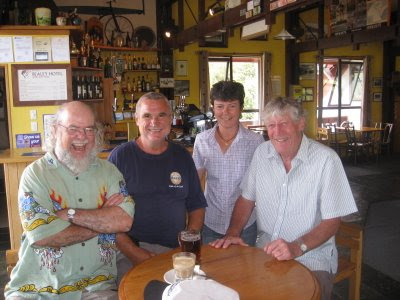 Paddy Freaney right with Rochelle to his right, Bob McKerrow and Robin Judkins. Photo: Bob McKerrow
Paddy Freaney was one of the best guys I have ever known for playing practical jokes. His Moa photograph that puzzled ornithologists for months must be one of the best. ever. But imagine the headlines in today's  Christchurch Press
'Death has not stopped adventurer Paddy Freaney reaching the summit of Mt Everest,'  14 months after he died
At 10.58am (NZ time) 23 May (NZ time), Freaney and wife Rochelle Rafferty stood atop the world's highest peak.
Rochelle Rafferty is now the fifth New Zealand woman to stand on the summit of Mt Everest.
Freaney died last year, but that has done nothing to quell his exploits.
Rafferty has carried her partner of 20 years all the way from the Upper Waimakariri Basin to the Himalayas in a small canister. 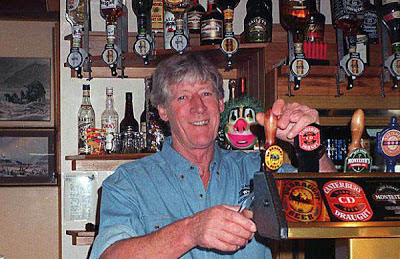 Reaching the summit has fulfilled a lifelong desire for the couple.
They had planned to travel to the Everest base camp in 2011, but just before they were due to leave, Freaney was diagnosed with terminal cancer.
Rafferty was considering trying for the summit on that trip.
Freaney, who rose to national fame in 1993 when he snapped a blurry photograph of a moa-like creature near Arthur's Pass, had attempted Everest three times.
The first two attempts were thwarted by bad weather. On the third, he injured his ankle while training in Nepal.
Freaney's ashes were not scattered at the summit, which is held sacred by Buddhists and many Nepalese.

Paddy Freaney made headlines reporting a moa sighting in the Craigieburn Range in 1993.
He was a notable climber and a former sergeant-instructor in the British Army's elite Special Air Service.
Born into an impoverished Irish family in 1939, he fought in Borneo and Muscat-Oman with the SAS.
He specialised in mountain survival and, on visiting New Zealand in 1969, fell in love with the Southern Alps.
He set up an outdoor education centre at Arthur's Pass and mentored many climbers. He made many expeditions in New Zealand and overseas, including the Himalayas.
Freaney built and ran the Bealey Hotel.
I never climbed with Paddy but once got close to it when I organised an expedition to get two publicans to the top of Red Lion Peak. It had never been climbed in winter before. But why Red Lion Peak ? Over 100 years ago, a young West Coast surveyor, who knew the hotel well, named the two prominent peaks at the head of the County Glacier Red Lion Peak and Mt. Evans, after the hotel and its publican. The idea was to try and get the overweight publican of the Red Lion hotel up Red Lion Peak. Paddy loved the idea.  So we finalised the group for Red Lion: Kevin Williams, 44, a carpet layer from Greymouth; Rod Buchanan, 52, bee keeper from Paroa; and David Norton, 34, a university lecturer from Christchurch. Peter and I made up the complement of five. The sixth member was to have been Paddy Freaney, but he was snowbound and unable to get over Arthur's Pass to join us. When I phoned Paddy shortly before we left, he said: “The only way I can come over is to flog a jigger and come through the tunnel to the West Coast.” Unable to commandeer a jigger, Freaney missed the trip. See full article here. 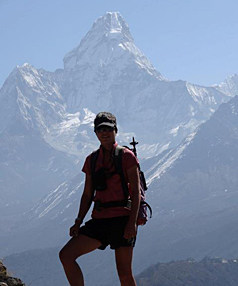 Rochelle Rafferty with Ama Dablam in the background.
In early 2009 I called into see Paddy and Rochelle at the Bealey Pub with Robin Judkins who had known Paddy longer than I. Paddy was in great form and he and Rochelle told us of their dreams to climb Everest and other peaks.

When Paddy Freaney died of cancer, and several hundred mourners made their way to his mountain home for a service with, not surprisingly, some unusual twists. 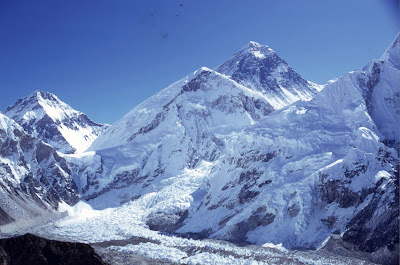 There was nothing ordinary about Paddy Freaney's life and his funeral was no different, a horse-drawn cart carrying the casket from his home across the road to his old pub, with the mountains he loved as a backdrop.
The Irish-born Mr Freaney, a former SAS soldier, had climbed most of the peaks in the area, and one summer he and a companion climbed all 31 New Zealand  peaks over 3000 metres high.
“Who dares wins – three words that epitomise Paddy,” says friend, Jeremy Watson.
Many mourners were outdoors enthusiasts he had encouraged or climbed with.To the public, he was known for a spectacular claim of a moa sighting near Arthurs Pass in 1993 - at the time he ran the Bealey Hotel, located nearby.

The news that the extinct bird might still exist went round the world and Mr Freaney stood his ground  in spite of scepticism from scientists.
“I think it’s as likely to be an image of a four-footed animal like a deer, as is it is to be a bird,” said scientist Dr Richard Holdaway at the time.
But the determined Mr Freaney was far more than just a moa man, after marrying fellow adventurer Rochelle Rafferty the pair embarked on some of the most challenging climbing expeditions here and around the world.
“He lived his life to the full,” said his wife Rochelle Rafferty.
“He didn’t count the years in his life but his life in his years, [he was] a truly inspirational character,” she says.
“What can you say, he was a legend - moas and all,” says Mr Watson.
In true Irish style Mr Freaney was taken back to the pub he had resurrected where mourners celebrated his life in exactly the way he wanted.

Thanks to stuff.co.nz for permission to use excerpts from their articles.

It is not my first time to pay a visit this web site, i am visiting this web site dailly and obtain fastidious information from
here all the time.

Look into my webpage: how much should i weigh for my age and height