Misery on a Taranaki mountainside 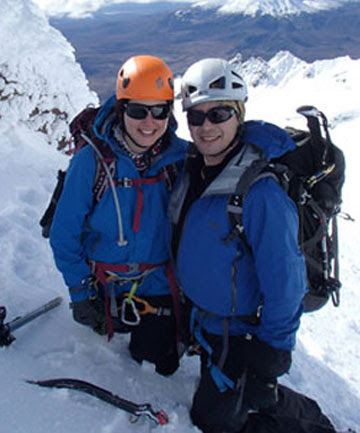 Nicole Sutton and Hiroki Ogawa died tragically in a snow cave on Mt Taranaki over the weekend. ROBERT CHARLES/Taranaki Daily News
TOUGH DECISION: Taranaki Alpine Cliff Rescue member Mike Johns was part of the search and rescue mission on Mt Taranaki last weekend.
I want to put this article on my blog in the hope that climbers and trampers of the future will learn from this and not repeat the mistakes made here. I have worked in mountain rescue teams in Otago and at Aoraki/ Mount Cook and have seen too many climbers die or badly injured due to either poor decisions and or not learning from others.
Here is an excellent summary of events written by Helen Harvey
In the early hours of Sunday morning Taranaki Alpine Cliff Rescue member Mike Johns got to within 200 metres of two climbers stuck on Mt Taranaki - only to be forced back by the weather.
Yesterday morning he was winched down onto the mountain, from an air force helicopter, and helped recover the bodies of Nicole Sutton, 29, and Hiroki Ogawa, 31, who died after they spent two nights in a snow cave. The recovery operation took place in near perfect conditions.
It was "a beautiful morning up there, not a breath of wind", Johns said.
But it was a different situation when he and his team started out just after 1am on Sunday - into driving wind, horizontal sleet and rain.
Massive gusts made walking difficult, he said. They got to nearly 2200 metres. The climbers were at about 2400 metres.
"We were the next valley over, but getting close to that altitude. They had given us a rough coordinate that was pretty close."
The rescue team was getting pounded by sleet, he said.
"So one side of your face was going numb. By that stage we were so covered in ice everything was starting to freeze up. It wasn't particularly pleasant conditions."
It got so bad that just after 3.30am they made the gut-wrenching decision to turn around and go back down.
"It weighed on everyone's mind. We discussed it as a team, but our safety came first and we all agreed we were at the point it was starting to get dangerous."
The team, who were carrying 20kg packs, were hoping the two climbers had dug in and were well secured in their spot, Johns said.
"They were probably in a better position than we were when we turned around.
"We discussed digging a snow cave as well and staying up there, but we thought, ‘What are we going to achieve?' We are going to be cold and wet and miserable and no good to anybody. We'd be better off coming back and regrouping and trying again."
There was a wind chill factor of -15 so it was "pretty cold".
Johns got back to the base at 6am. Teams were still assembling and the fourth team to go up made it to the climbers who were dug in just below the rim of the crater.
Normally it is possible to get right inside a snow cave and get out of the weather, he said.
"But they had just managed to dig a slot in the snow and get into it.

Agree with you on the benefits of learning from others' mistakes.

But a lot of mountain accidents also arise from the nature of the environment and, in New Zealand especially, the incredible speed with which conditions can turn from perfect to life-threatening. So I do have some sympathy for this couple who were caught out in the wrong place at the wrong time and had to deal with the cards they were dealt.

We have all gone on routes we probably shouldn't have and that is one way that we and the sport progress. Sometimes the results are tragic, as here. A very sad day for all and I am sure that the rescue teams are having a very bad time given the fact that the young lady was found alive but died subsequently.

Hope your retirement is going well.