A halt to Japanese whaling in the Antarctic 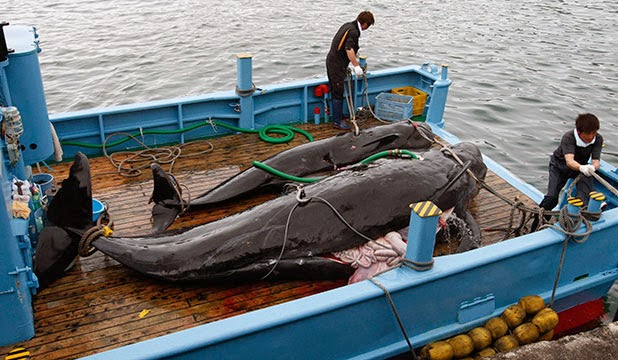 This is great news for so many of us as we have just learned that judges at the highest UN court ordered Japan to halt whaling in the Antarctic, rejecting the country's long-held argument that the catch was for scientific purposes.

New Zealand can take "significant credit" after the UN ordered Japan to stop whaling in the Antarctic, Foreign Affairs Minister Murray McCully says.
Judges at the International Court of Justice, the highest UN court, today rejected Japan's long-held argument that the catch was for scientific purposes and not primarily for human consumption.
Tokyo said it was disappointed but would abide by the decision, while activists said they hoped it would bring closer a complete end to whaling.
The court sided with plaintiff Australia, which was supported by New Zealand, in finding that the scientific output of the whaling programme did not justify the number of whales killed.
The practice was deeply offensive to many New Zealanders, McCully said this morning.
Activist Pete Bethune, who in 2010 was arrested and indicted in Japan after he boarded a Japanese whaling vessel in the southern ocean, slept outside The Hague overnight to make sure he was in the court to see the ruling handed down.
"I am over the moon," he said today.
"I believe justice has been served and I feel in some way vindicated with my activities in 2010. It's been amazing, a very emotional day."
The tribunal said no further licences should be issued for scientific whaling, where animals are first examined for research purposes before the meat was sold to consumers.
"In light of the fact the JARPA II (research programme) has been going on since 2005, and has involved the killing of about 3600 minke whales, the scientific output to date appears limited," presiding Judge Peter Tomka of Slovakia said.
Japan signed a 1986 moratorium on whaling, but has continued to hunt up to 850 minke whales in the icy waters of the Southern Ocean, as well as smaller numbers of fin and humpback whales, citing a 1946 treaty that permits killing the giant mammals for research.
Japan was "deeply disappointed" by the ruling, but it would comply, said Koji Tsuruoka, the country's chief lawyer before the court.
He said the Japanese Government would need to study the ruling before taking any further action.
Judges agreed with Australia that the Japanese research - two peer-reviewed papers since 2005, based on results obtained from just nine killed whales - was not proportionate to the number of animals killed.
The judgment is an embarrassment to Japan, but Tokyo could continue whaling if it devised a new, more persuasive programme of scientific that required "lethal catch" of whales, or if it withdrew from the whaling moratorium or the 1946 International Convention for the Regulation of Whaling.

Labour's foreign affairs spokesman David Shearer said the ruling was a victory for both New Zealand and Australia.
"The court has confirmed what New Zealand has always claimed - that Japan's continued killing of whales under JARPA II, which is nothing more than slaughter under the highly dubious guise of science, is false," he said.
"Like New Zealand, Japan has always placed great importance on the international legal order and the rule of law. Japan's early statements that it will abide by the ICJ's ruling are welcome.
"Diplomatic efforts are now needed to ensure that new loopholes are not found to continue whaling operations."
Shearer said the decision was "fantastic news" for those who had campaigned for the protection of whales.
INTENSE SCRUTINY
Whaling was once widespread around the world, but Japan is now one of only three countries, alongside Iceland and Norway, that continue the practice.
The meat is popular with some Japanese consumers who consider it a delicacy.
Norway, the other main whaling nation, in 1993 shifted away from scientific whaling to "commercial" catches, where the meat is sold directly to consumers.
Norway set a quota of 1286 minke whales in the north Atlantic in last year's summer hunt, saying stocks were plentiful in the region. Fishermen rarely catch the full quota, partly because demand has sunk in recent years.
Iceland and Norway do not claim to be carrying out research, openly hunting whale meat for commercial purposes, meaning the ICJ's ruling has no immediate consequences for them. But activists said the ruling reflected a gradually changing climate that would put an end to whaling.
"Whaling is under immense scrutiny from the international community, and the pincer movement on these countries is ever tightening," said Claire Bass, wildlife campaigner at the World Society for the Protection of Animals.

Thanks to Reuters, Fairfax NZ for permission to use excerpts from various articles.

Another interesting viewpoint is that of Gigi Ewing who says it's time for Japan to 'stop pulling the cultural card'.
It was evident that their actions in killing whales had nothing to do with so-called research, despite the Japanese painting "research" on their ships, as if just labeling it made it so.
As soon as the ships returned to port, whale meat would suddenly show up in the markets.
It is not a "cultural" tradition to eat whale meat as is claimed, but one that occurred only during the war, when protein was scarce. There are many generations that do not even know or recognise that what they are eating is indeed whale meat.
With the world recognising the ban on killing whales, it is time for this barbaric practice to stop.
There are many other sources of meat nowadays and Japan needs to stop playing the cultural card.
I would hope that now that the international community has brought their hypocrisy to light, the murder of innocent and endangered whales will stop.
I wish that New Zealand had joined Australia in this fight, since we oversee the Antarctic Ocean in which this hunting occurs.
I would hope we will back up this decision.
Posted by Bob McKerrow - Wayfarer at 23:17

Email ThisBlogThis!Share to TwitterShare to FacebookShare to Pinterest
Labels: A stop to Japanese whaling, scientific whaling., whaling in the Antarctic

Hello Everybody,
My name is Mrs Sharon Sim. I live in Singapore and i am a happy woman today? and i told my self that any lender that rescue my family from our poor situation, i will refer any person that is looking for loan to him, he gave me happiness to me and my family, i was in need of a loan of S$250,000.00 to start my life all over as i am a single mother with 3 kids I met this honest and GOD fearing man loan lender that help me with a loan of S$250,000.00 SG. Dollar, he is a GOD fearing man, if you are in need of loan and you will pay back the loan please contact him tell him that is Mrs Sharon, that refer you to him. contact Dr Purva Pius,via email:(urgentloan22@gmail.com) Thank you.