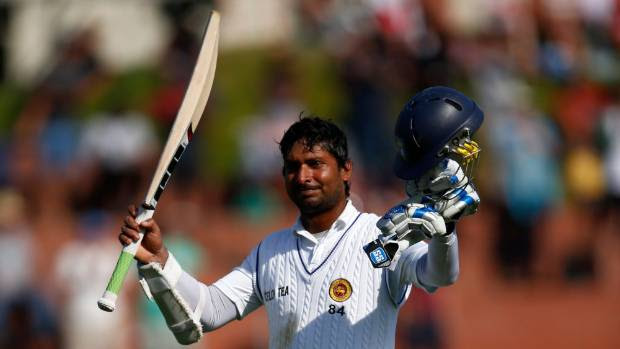 Getty Images
:
I worked in Sri Lanka for three years after the brutal end to the ethnic conflict in the north of the country. The Red Cross while doing a lot of construction of houses (20,000 plus) also did a lot for reconciliation. The name of Kumar Sangakkara was mentioned a lot ad it was easy to see the role he played as a national healer. Here is that story.

Kumar Sangakkara is more than a cricketer.
When he scores runs, Sangakkara is not just playing a game or plying a trade. The great Sri Lanka batsman is treating a nation whose body still floats on the putrid waters of the civil war and the 2004 tsunami. Sangakkara serves his country when he bats. He is a man from beyond the boundary.
Does that sound grandiose to you, a little far-fetched? It is hard to think otherwise in this golden land where for many sunburn is the biggest daily danger. But when Sangakkara speaks of "the potential of cricket to be more than just a game ... a sport so powerful it is capable of transcending war and politics", he is thinking of home.
My Sri Lankan doctor friend put it simply. "Cricket heals," he said.
Perhaps we should think of Sangakkara as the Great Healer. Every time he went down on one knee at the Basin and rippled a cover drive to the ropes, Sangakkara was tending another countryman left desolate or homeless by civil war and flood. Neville Cardus could have been thinking of Sri Lanka when he wrote, "Without cricket there can be no summer in that land."
Sangakkara's first cricket coach, D H de Silva, "a wonderful human being who coached tennis and cricket to students free of charge", was shot on a tennis court by insurgents. They put two bullets in his stomach. As he lay on the ground, the rebels pressed the barrel to de Silva's head. The gun jammed.
Such tales are Sangakkara's history. He grew up in the damp hills of Kandy where frequent drizzle moistened a pitch that was forever green. As a boy Sangakkara learned to play against swing and seam and bounce and carry. His current teammates from Colombo may have looked on this Basin pitch as a foreign surface, but when Sangakkara came out onto the green grass, he saw only home.
He wasn't an heroic boy, not like Mahela Jayawardene. Crowds of 10,000 used to come to watch the 13-year-old prodigy bat in Colombo. Sangakkara was just another lad with a bit of talent. Fittingly when he came down from the hills to the big city, he did not join Colombo Cricket Club, with its colonial history of tea and timber, but the Nondescripts.
Back then Sangakkara did not tell boyhood stories of his Tamil friends who hid in his Sinhalese parents' house in order to avoid being butchered in the race riots. He talked instead of his dream to one day play for his country. Sangakkara's team-mates sat back and laughed.
None of them would have believed that this boy from the hills would become perhaps the greatest batsman of them all, greater than even Arjuna Ranatunga and Sanath Jayasuriya and Jayawardene. Sangakkara's current test average of nearly 60 is even more astonishing given that his first 40 tests were played as a wicketkeeper-batsman who went in at No 3. Purely as a batsman he averages nearly 70.
It was a privilege to be at the Basin on Saturday afternoon when the people of the capital gave Sangakkara a standing ovation on passing 12,000 test runs. The next day Brendon McCullum ran to shake Sangakkara's hand when he reached his double century. The reaction from crowd and captain did New Zealand proud.
Many may not remember that Sangakkara and his team-mates were in a New Zealand dressing room when the early sketchy news of the devastating tsunami first leaked in by text on Boxing Day in 2004. Typical of the man Sangakkara returned home and joined Muttiah Muralidharan's relief convoy, taking food and supplies out to people whose lives had been smashed.
In the MCC spirit of cricket lecture that he gave at Lords in 2011, Sangakkara remembered: "In the Kinniya Camp just south of Trincomalee, the first response of the people who had lost so much was to ask us if our families were OK. They had heard that Sanath and Upul Chandana's mothers were injured and they inquired about their health. They did not exaggerate their own plight nor did they wallow in it."
Cricket heals.
When Sangakkara is out of touch, as he was early on this tour, and driving everyone mad with his endless demands for throw-downs in the nets, it is partly because he must give something back to his people.
Five years after the tsunami, Sangakkara was on the team bus in Pakistan, on what seemed like a truly 'nondescript' day, when terrorists attacked. "As I turn my head I feel something whizz past my ear and a bullet thuds into the side of the seat, the exact spot where my head had been a few seconds earlier. I feel something hit my shoulder and it goes numb."
When Sangakkara returns home, he is told by a soldier, "It is OK if I die because it is my job and I am ready for it. But you are a hero and if you were to die it would be a great loss for our country." Sangakkara is overwhelmed. "How can this man value his life less than mine?"
So when Sangakkara is asked to not retire, he cannot refuse. When he wins the man of the match in the final of the 2014 T20 World Cup, Sangakkara knows that cricket is more than a game. When he hits the four that takes him to his 200 on Sunday afternoon, it is not a destructive shot because Sangakkara is a healer.
He says, "With me are all my people. I am Tamil, Sinhalese, Muslim and Burgher. I am a Buddhist, a Hindu, a follower of Islam and Christianity. I am today, and always, proudly Sri Lankan."

Thanks to  the the Dominion Post for permission to run parts of this article.
Posted by Bob McKerrow - Wayfarer at 22:31

Claim FREE bitcoins over at Easy Bitcoin. Up to 33 satoshis every 10 minutes.