The best hangout spot for mountaineers 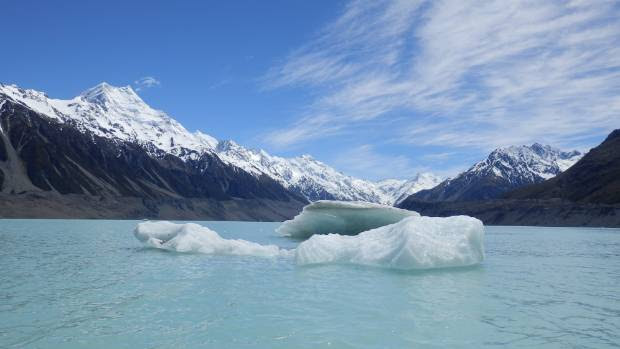 
I came back to The Hermitage Hotel thinking I'd been rather intrepid. With squalling rain being sent horizontally across the Hooker Valley by 70km/h winds, taking on the three-hour return trek to Hooker Glacier felt like a noble feat of hardy resoluteness. The soaking was just about worth it to see the eerie blue icebergs floating across the lake, but much of the mountainous setting was obscured by mist.
On a clear day, though, a good clutch of New Zealand's tallest mountains would be in clear view – including Aoraki/Mount Cook, the tallest of them all.
The high country around Mount Cook has long been a favoured hangout for mountaineers – including, it turns out, the most famous one of all. 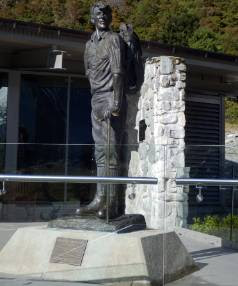 David Whitley
The Hillary statue at The Hermitage Hotel.


A massive statue of Sir Edmund Hillary has pride of place outside The Hermitage, which has been the main accommodation option in these parts since 1884. And it's fair to assume that Sir Ed would prefer it that guests were strapping on their boots and tackling the alpine tracks.
But some days, three hours of being brutalised by Mount Cook's notoriously volatile weather is quite enough.  Luckily, Sir Ed's name has been given to a museum and theatre complex – somewhere grippingly suitable on even the grimmest of days.
The Sir Edmund Hillary Alpine Centre was opened in 2007, just a few months before Hillary died, and it opens eyes to an achievements reel that goes way beyond conquering Everest.
By anyone's standards, Hillary led a remarkable life. He was part of the first expedition to get to the South Pole by land since Robert Falcon Scott's fated mission in 1912; he set up schools all over Nepal; he was the High Commissioner to India and he travelled the Ganges from mouth to source in a jet boat.
Yet, through all this derring-do, it becomes clear how big a part in his life New Zealand's Southern Alps played in his life. The area around Mount Cook was where he cut his teeth – and his connection to these mountains becomes strangely more fascinating than his ascent of Everest.
In the 1945-46 climbing season, he was phenomenally busy, scaling a huge clutch of New Zealand's 3050 metre-plus peaks. This culminated in his first ascent of Mount Cook – a notoriously difficult climb due to the amount of technical expertise required and the feistily changeable weather conditions coming off the Tasman Sea.
In 1948 he was part of a quartet to make the first successful ascent of Mount Cook via the previously untamed South Ridge. His first truly pioneering climb would be a footstep to a far more impressive

The photos on display are incredible time capsules, but it's not the ones where Hillary's on a summit that strike a chord. The sense of character comes from those where he's using the area as a training ground for the Antarctic expedition. In one he's surrounded by huskies and a ski-plane on the Tasman Glacier, where he honed his dog-sledding skills. In another he's sat astride one of the converted Ferguson tractors that he drove to the South Pole in, wearing a jumper that could be a gaudy Christmas present and sporting a delightfully simple smile.
This was Sir Ed's playground. And he did a spectacularly good job of making my little amble in the rain look like child's play.

DAVID WHITLEYThe writer was a guest of Tourism New Zealand.