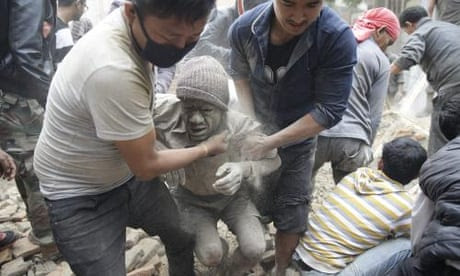 Nepal quake: more than 1,000 people dead after tremor near Kathmandu

Nepalese authorities warn death toll is likely to rise following worst quake in Himalayan nation in more than 80 years
Climbers at the Mount Everest base camp – and others trapped higher on its slopes – were locked in a desperate effort to treat injured colleagues caught in a devastating avalanche that swept through the encampment after being triggered by Saturday’s powerful earthquake.
With at least 13 people believed to have been killed on Everest, and others injured, climbers in the camp sent frantic messages calling for helicopter assistance to evacuate the most badly wounded.
Although official figures listed eight deaths, that figure seemed likely to rise.
Romanian climber Alex Gavan, who survived by running from his tent, posted a desperate appeal on Twitter.
“Huge disaster. Helped searched [sic] and rescued victims through huge debris area. Many dead. Much more badly injured. More to die if not heli[copter] asap.”
Earlier, Gavan had described his own close call, writing there had been a “huge avalanche” and “many, many” people were up on the mountain. “Running for life from my tent,” Gavan said.
At least 300 foreign climbers and hundreds more Sherpas had been on the mountain, or close to it, when the disaster struck.
Higher on the peak, other teams appeared to be trapped after the route through the Khumbu Icefall – which is fixed annually with ropes and ladders and gives access to the higher slopes – appeared to have been badly damaged.


Daniel Mazur, a well-known Bristol-based climber and guide, who has joint US-British nationality, was among those trapped higher on the mountain, at camp one, which is at about 6,000 metres up.
Mazur said base camp had been severely damaged and his team was trapped. “Please pray for everyone,” he wrote on Twitter.
A British army expedition – at advanced base camp at 6,500 metres – reported that all its members were safe and well.
Everest base camp is particularly vulnerable because it is on a shoulder of rocky glacial moraine below the Khumbu Icefall – a maze of crevasses and tottering glacial ice cliffs – through which climbers must navigate an often dangerous path.
Mazur reported later that the route through the icefall had been destroyed but that his team was unharmed, although they had felt the quake on the mountain’s north side.
The avalanche at base camp is the second serious incident in two years. Last year, 16 Sherpas were killed in an avalanche in the icefall.
Reports suggested there had been avalanches on the nearby mountain of Makalu, the fifth highest in the world, which other parties were climbing.
A large number of climbers had been at Makalu base camp and had begun acclimatisation climbs to higher camps in the past few days.
The mother of climber Arjun Vajpai told the Observer he had called to say he was safe in base camp.
However, British climber Gareth Douglas posted on the British Mountaineering Council’s Facebook page: “We are on the Makalu exped[ition] on the north side, all is well at base camp bar rock fall with no casualties. ABC [advanced base camp] is also OK but there was an avalanche off the north col resulting in one broken leg as far as we know.”
The quake was also felt strongly on Cho Oyu, the world’s sixth-highest peak, while parties had also been getting ready to climb Annapurna and Dhaulagiri, closer to the epicentre.
The earthquake struck in the midst of the spring season in Nepal, when most of the attempts to climb mountains in the region are made.
According to the Nepalese tourism department, which regulates climbing in the area, the bodies of eight people were recovered on Mount Everest, although a spokesman cautioned that an unknown number of people remained missing or injured.