The pioneering anarchist mountaineer tends to his garden 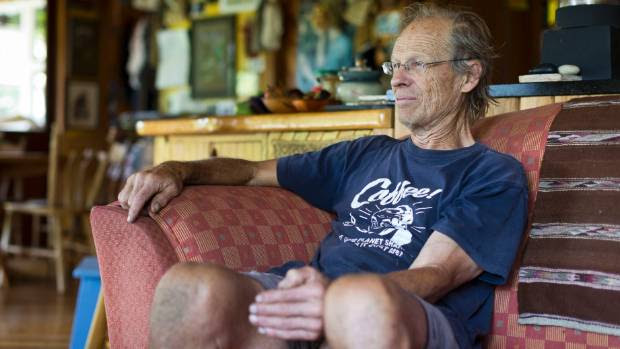 Alden Williams/Fairfax NZ
John Glasgow became the first to climb Mt Cook/Aoraki's Caroline Face in November 1970. Glasgow successfully summitted with friend Peter Gough.
I lived at Aoraki Mount Cook village from 1971 to 1973. During the winter of 1972, I got to know John Glasgow quite well. We did a few skiing trips together to Round Hill at Lake Tekapo, and to the Lake Ohau ski field. A kind and caring soul, John marched to a different drummer.

When John Glasgow was young he was a walker. He walked Nelson Lakes, through the Tableand and the Cobb Range tracks. Whenever he did he was always a day late getting back to civilisation. His mother would wait for him at the other end and when he didn't arrive she would simply return next day.
"She was slightly concerned but she trusted us."
It was a different era back then. In the 1960s there weren't personal locator beacons. There was only you and the wilderness. He liked the vastness of the outdoors. There were no rules. Just you and the wilderness. If you made a mistake, you owned it. Even back then, as a teenager, Glasgow thought that was the way it should be.
Nelson was Glasgow's playground. He was a skier. Then he became a climber. He climbed Mt Hopeless and Mt Travers. And when you get to the top of them you see Arthur's Pass. When you climb Arthur's Pass you see Mt Rolleston and the Arrowsmith Range. Glasgow just kept going further south - each time the mountains getting bigger. Then he arrived in Twizel in South Canterbury. He was a geology student there. That was going to be his career. He enjoyed the outdoors and understanding how it came to be. But one day a friend George Harris said he needed a climbing partner. It would be Glasgow's very first foray into Mt Cook National Park. So he clamped on some crampons and some boots. The trip set several things in motion.
Glasgow always liked being in the mountains. He liked being on the side of them and watching the space drift into nothingness below him while above it towered over him. Some people climb to summit. Glasgow climbed to climb. Whether it was a 3000 metre peak in New Zealand or a 6000 metre one in Peru, seeing the peak from below was always a humbling experience.
In 1970 Glasgow and his friend Peter Gough were joined by Harris and Graeme Dingle.
They agreed to try something that had not been achieved before. By then they had headed up Aoraki several times. On this occasion, however, they would climb Mt Cook's Caroline Face.
It had never been achieved before. It remained a colossus in the climbing world. It has the longest vertical lift of any climb in New Zealand. It is the country's highest at 2000m. It is dangerous.
"When a powder avalanche comes it wipes the whole face clean," Glasgow says now from the comfort of his home in Ngatimoti.On this day Glasgow has been in his vast garden tidying up his vegetable patches. He heads inside and takes a seat on his couch. Then he tells the story about he and Gough came to set the climbing world alight. How their pictures, with sunglasses, beards and bandannas came to grace newspapers across the country.

On that attempt in early 1970 the group only got half way up before weather forced them back down. It closed in fast and there was no way they were going to make it to the top. They had to clamber down gullies and jump down waterfalls in the dark. By the time they got back Glasgow says they would have slept in their sodden clothes if it had not been for Gough's wife helping them to bed. The Face had beaten them. In their stupor they vowed to give up climbing. That, however, did not last long. Instead, another vow surfaced - the following season, if the weather was good, they would go and try one more time.
Glasgow and Gough arrived at the Hermitage Hotel in Mt Cook on November 7, 1970. The pair were in their twenties. They looked up to the range. The weather was good. They knew more about the climb this time. They knew how to ascend. So they went. Parts of the climb which previously took them three hours only took 10 minutes. They climbed with straight ice picks - climbing in balance the whole way as they crept up the ice cracks in the face.
Below them was a 1000 metre vertical drop.
"It just goes on and on," Glasgow recalls
The safest route was up a sharp, rocky ridge. That night they stayed - setting up a bivouac on that ridge. It was then that a small river of an avalanche rolled by. The snow was wet and it flowed smoothly.

"We could put our hand out and touch it."
They just hoped another larger one wasn't behind it. That night was a meal of tins of stew, chocolate, biscuits, and hot drinks. The following day would be the most challenging part of the climb - a sheer ice climb. The entire face had little cracks you could nick the upper points of your crampons on to. Carefully they threaded their way across the hard ice. Back down in the Hermitage a crowd had gathered with binoculars, checking their movements as they emerged on the ice fields along the ridge of the mountain.
Crossing the field was "like a roof", Glasgow said - ice sheets dropping away on either side with nothing of the mountain visible beneath. Eventually they got to the ridge but bypassed the nearby summit as that had already been accomplished long ago. Then they dropped down the west face, an easier descent.
Glasgow looked up and saw the sky had turned grey and purple. There were huge curtains of it.
"I'm thinking I must be really tired," Glasgow says. "
But Gough was seeing it too. It was the Aurora Australis.
"I had never seen it there before. It was shimmering."
When they returned to the Hermitage Hotel an excited crowd was there to greet them. The story was splashed across the front pages of newspapers around New Zealand. Glasgow declared the summit "a victory for hippies". The climb was hailed as the greatest of the millennium by the New Zealand Alpine Council. It also changed Glasgow's life. Before the summit he was likely heading to a geology job in Western Australia. Instead he was offered a job alpine guiding in the national park.
He ended up climbing Mt Cook 11 times. But he never did the Caroline Face again. However, as he kept climbing there was an feeling that increasingly came over him.
It was there when he was doing a practice run with a client who wanted to summit Aoraki. The pair went up a rocky ridge with small steps. Glasgow was tied to his client and was pulling himself up on to a shelf when his client slipped. Glasgow was luckily tied on a short rope. If he had not been it might have been fatal.
"I was more alert to the fact that when you are on your own you can make a mistake, but when professionally guiding you can't and your climber can make one any old time."
Glasgow says he wasn't hard enough mentally to carry on putting himself in dangerous situations. Some people had it. Others got frightened more quickly. Glasgow says he was one of the latter. When he was on the mountain he was all right. It was after and before that his mind played tricks on him. He stopped climbing almost altogether.
Soon after he left the area and returned to the Nelson region. A group bought a piece of land and helped set up a commune.
"I'm an anarchist and I was fed up with all these rules. I always followed the movement. When it works it is the best form of government."
However, after many years he realised that like all other forms of rule, self interest will always win out.
"Any 'isms' work when people curtail self interest."
Glasgow landed a job as an Abel Tasman guide though he sees the role more as a safety officer and an interpreter - fauna, flora and natural history. Then he bought his own piece of land in Ngatimoti and set about tending it for himself. His garden is blooming and hands dirty when we meet him. His memorabilia - his ice axe and boots have gone to his children to enjoy. In a back room there are albums filled with photographs of his earlier days. He is there staring back out of black and white images with long flowing hair. He looks back at those images now.
"I still think about climbing sometimes," he says.
Then the anarchist mountaineer goes back to his garden.