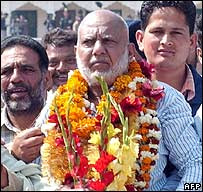 During my last week in India I have been following the sad situation of Kashmir Singh who has languished in a Pakistani jail for 35 years. Imagine the harrowing and dehuamising experience he has been through.

The BBC gives us the latest update on the storyAn Indian man released from a Pakistani prison after spending 35 years on death row has been reunited with his family in India.
Kashmir Singh, sentenced to death for spying in 1973, was released on Monday.

He was discovered by Ansar Burney, a social worker who tracks people lost in Pakistan's jail system.

Hundreds of servicemen and civilians were imprisoned by India and Pakistan during hostilities between the two sides in 1965 and 1971.


Mr Singh's wife and son were among hundreds of people who had gathered to greet him at the Wagah border in the northern Indian state of Punjab.

Mr Singh was re-united with his family after basic medical tests and checks at the border.

"I am very, very happy and will escort him back to gurdwara [Sikh temple] to pray," his wife, Paramjeet Singh said.

Ansar Burney discovered Mr Singh on a recent trip to a jail in Lahore and persuaded Pakistan President Pervez Musharraf to revoke his death sentence and order his release.

Mr Singh was a former policeman who had become a trader in electronic goods.

Speaking on Monday after his release from jail, he said: "I feel better. I am happy."

Mr Singh was arrested in the city of Rawalpindi in 1973 and convicted of spying.

Pakistan and India frequently arrest each other's citizens, often accusing them of straying across the border - some are treated as spies.

Mr Burney said last week that Mr Singh had been held in a condemned prisoner's cell for most of the time since his conviction, and had become mentally ill.

He said that he was first informed about the case several years ago by members of the Indian community in London.

But he was unable to locate Mr Singh, despite visiting more than 20 jails across the country in connection with his campaign for prison reforms and prisoners' rights.

The minister said Mr Singh had not received a single visitor or seen the open sky and, like other condemned prisoners, was locked in an overcrowded cell for more than 23 hours a day, in conditions which the minister described as "hell on Earth".
Posted by Bob McKerrow - Wayfarer at 04:11

Email ThisBlogThis!Share to TwitterShare to FacebookShare to Pinterest
Labels: 35 years in jail