Where have all the glaciers gone ? 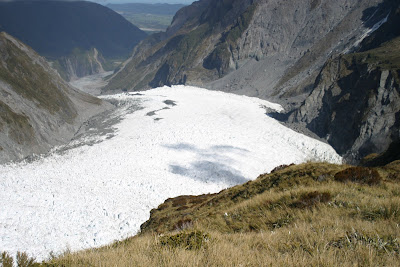 During the past 45 years I have spent a lot of time walking on glaciers, looking at glaciers and studying glaciers. Above is a photo of the mighty Fox Glacier in New Zealand that I took 3 years ago. Today I was alarmed to read in a report from Oslo
that a thaw of the world's glaciers has accelerated to a new record with some of the biggest losses within Europe, in a worrying sign of climate change, the UN Environment Programme (UNEP) said on Sunday.

"Meltdown in the mountains," UNEP said in a statement, saying that a retreat of glaciers from the Andes to the Arctic should add urgency to UN negotiations on working out a new treaty by the end of 2009 to combat global warming.
"Data from close to 30 reference glaciers in nine mountain ranges indicate that between the years 2004-2005 and 2005-2006 the average rate of melting and thinning more than doubled," it said.
Some of the biggest losses were in Europe -- in the Alps, the Pyrenees and the Nordic region -- according to the UNEP-backed World Glacier Monitoring Service (WGMS) at the University of Zurich in Switzerland.

"The latest figures are part of what appears to be an accelerating trend with no apparent end in sight," WGMS director Wilfried Haeberli said in a statement.
The estimates, based on measuring the thickness of glacier ice, indicated an average loss of about 1.5 metres (5 ft) in 2006, up from just over half a metre in 2005. UNEP said that the thinning was the fastest since monitoring began.

Since 1980, glaciers have thinned by about 11.5 metres in a retreat blamed by the UN Climate Panel mainly on human use of fossil fuels.
The thaw could disrupt everything from farming -- millions of people in Asia depend on seasonal melt water from the Himalayas -- and power generation to winter sports. The thaw could also raise world sea levels.

UNEP said glaciers were among the clearest indicators of global warming. "There are many canaries emerging in the climate change coal mine. The glaciers are perhaps among those making the most noise," said Achim Steiner, head of UNEP.

Of almost 30 reference glaciers only one -- the Echaurren Norte in Chile -- thickened in 2006 compared to 2005. The WGMS monitors about 100 glaciers in total.
Some glaciers, such as Bolivia's Chacaltaya glacier, Canada's Place glacier, India's Hamtah glacier and the US Daniels and Yawning glaciers shrank less in 2006 than in 2005.

Steiner said that governments had agreed to work out by the end of 2009 a new pact to succeed the UN's Kyoto Protocol, which binds developed nations except the United States to curb emissions of greenhouse gases.

"Otherwise, and like the glaciers, our room for manoeuvre and the opportunity to act may simply melt away," he said. A first set of UN negotiations on a new climate treaty will be held in Bangkok from March 31-April 4.
Posted by Bob McKerrow - Wayfarer at 02:06