Aid is about poverty, not politics 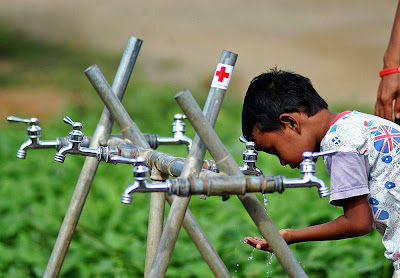 This is not the time to make aid a political tool or to abandon the aim of poverty reduction. Aid should be for the benefit of the poor.

The equivalent of 20 planeloads of children were killed yesterday. They weren't actually on planes so their deaths didn't make the news. Rather, they were victims of one of the world's major killers - dirty water. They died mainly from diarrhoea, and the real tragedy was that their deaths could have been avoided.
In New Zealand, we take clean water and toilets for granted, but it was well into the 20th century before child deaths from dirty water dropped dramatically in rich countries. In the world's poorest countries, more than a billion people are forced to drink contaminated water and about 40 per cent of the world's people - 2.5 billion - lack basic toilets.

Surveys show that the New Zealand public understands this message. Of the 76 per cent of New Zealanders who support our government giving overseas aid, clean water is identified as one of the highest priorities.
Many people also understand that giving aid is not easy. It clearly doesn't work if some people are just given the money. Aid should be a hand up, not a handout. For example, local communities need to be the ones who plan the water projects, set up a mechanism to maintain them, do the work to build it and, crucially, all commit to using toilets.
Aid can help with the costs of materials such as pumps or piping. This is the way that groups like Oxfam work, forming close relationships with community-based groups to ensure that aid is effective and long-lasting.
It is harder for the New Zealand Government to work in this way as it needs to work through its government counterparts in developing countries. Over the years, there have been scandals from the misuse of aid, either from corruption by the recipient government or political meddling from the donor government (such as giving hidden subsidies to companies or using aid to gain leverage in trade negotiations).
To develop good practice in aid delivery, the Organisation for Economic Co-operation and Development (OECD) provides advice to New Zealand and other donor nations. Its peer review of our aid programme in 2000 suggested the government focus on poverty reduction and separate its aid agency from the Foreign Affairs and Trade Ministry (MFAT), to ensure the aid benefits are clearly targeted toward the poor, rather than being captured by politically powerful elites.
After a comprehensive review in 2001, a new agency, NZAid, was established, with semi- autonomous status (still retaining close ties to MFAT, but with operating autonomy). A 2005 OECD review declared that "the creation of NZAid can be considered a success". This was confirmed in an in-depth Cabinet- level review a few months later.
But in a matter of weeks, this may all change. Foreign Affairs Minister Murray McCully has called for a change in the status of NZAid, widely interpreted to mean folding it back into MFAT, and a change to the aim of spending aid money, from poverty reduction to economic development.
These decisions are expected in the coming weeks, and unlike the previous four comprehensive studies that supported poverty reduction and some autonomy for NZAid, the reviews will be quick and without public consultation or parliamentary debate.
This has been met with deep concern across the political spectrum. Decisions on the effectiveness of spending almost $500 million should not be taken without proper evidence and consultation with development experts, in New Zealand and abroad, especially since it flies in the face of the practice of most of the donor agencies of the OECD.

I read these comments above yesterday on Stuff.co.nz, written by Barry Coates, executive director of Oxfam New Zealand. He echoes what I have been saying for years: keep Aid out of highly political ministries, and put it in professional semi- autonomous Aid units. To think this is being done in a secretive way without public consultation is alarming.

I am pleased that Oxfam and the other 93 agencies that are members of the Council for International Development are calling on the minister to recognise the seriousness of this decision. The lives of many people are at stake. We may be suffering from financial upheaval, but the impacts are far more severe in most developing countries, including our Pacific neighbours.
This is not the time to make aid a political tool or to abandon the aim of poverty reduction. Aid should be for the benefit of the poor.
As a country, our aid can provide tangible benefits, such as clean water and sanitation, to people in our region and beyond. We can stop those senseless deaths of children from disease. Now is the time to ramp up our aid programme to do more, not to divert it for political aims.

Thanks to the Dominion Post for permission to use part of this article.
Posted by Bob McKerrow - Wayfarer at 01:40

Kia ora Bob,
This is the National government we voted for. They are steam rolling through ACC blaming Labour and mismanagement for monetary shortfalls when the reality is they have been exposed to the very same market forces as every other entity whom invested in the markets, and the long term debt they speak of through forked tounges. At the same time they have their foot on the necks of every government department they are encourageing SOE's to be more profit driven and drive consumer power prices even higher. Go figure! Murray Mc Cully as a Foreign Minister is something of a joke.
Cheers,
Robb

We get who we voted for and this is a taste of what to come. We need to make our Government accountable and have to challenges upcoming decisions like this. I admire your commitment and passion to ensure we get good Governbance.

came across your blog while googling Hot Steel by Terence White. Funnily enough I spent St Pat's in Penang before crossing to Medan about 5 years ago. Great to hear that aid has really made a difference in Aceh.

Would love to mail you further re your work - conormachugh@yahoo.co.uk

Hi Bob. Just to add to what you've written here, Russell Brown recently posted about the NZAID situation in his Public Address blog, which has many readers who more often than not tend to fall towards the left of the political preferences (but not always).

The post itself and the ensuing discussion (about 126 comments, some more rational than others) has some additional links on the topic.

Good to read you know Penang and Medan. Yes the AID to Aceh really has made a huge difference.

Thanks for directing me to Russell Brown's blog. Very useful.
Tks. Bob

...please where can I buy a unicorn?

...please where can I buy a unicorn?

Thanks mate... just dropped by. Will look for BIKE STN when we get to Seattle. Still in Buenos Airies.
xanax

Thank you for sharing this useful information and keep writing this type post.We provide best option to product Play poker online Online Poker games ought to forever be fun and energizing for everybody so we generally make a poker stage to satisfy our players in most ideal ways.We generally accept that our players should track down an awesome, protected, secure and energizing climate.