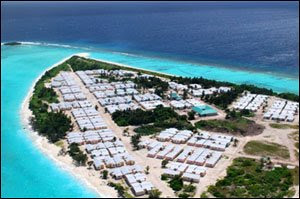 I was so thrilled last Monday, 2 March when a dream I was involved in at the outset, was finally completed. When the Tsunami struck the Maldive Island on 26 December 2004, I was based in New Delhi covering the Tsunami affected countries of India, Maldives and Sri Lanka. My good friend Jerry Talbot was head of our delegation in the Maldives at that time, and together we visited Dhuvaafaru and planned with the Government for it to be a safe island for the future, so people would not have to suffer again from killer Tsunamis. I will let Ahmed tell his story about his new island.


Twenty-year-old Ahmed Mohamed hums a tune as he pushes the loaded wheelbarrow piled high with lunch packs. It is 12:30 pm – the sun is glaring fiercely above Dhuvaafaru and the temperatures have hit 31 degrees Celsius. My colleague, Mariyam, had a chat with him a few minutes later after he had delivered all the lunch packs. He said that he had taken two days off from his job as a social worker in charge of Raa Atoll’s family and children’s service to help the International Federation of Red Cross Red Crescent Societies (IFRC) conduct a lottery in preparation for the relocation of his tsunami-affected community to the island of Dhuvaafaru. He sheepishly added that he also wanted to witness his father pick – from the draw – the houses that would be their new home. The Dhuvaafaru project is the biggest in the IFRC’s history. When work began in April 2006, the 40-hectare coral island was uninhabited. In just under three years, and at a cost of 35.6 million Swiss francs, it has been transformed into a thriving community that now boasts 600 new houses, three schools, one mosque, a health centre and an island administration block complete with auditorium and sports stadium. 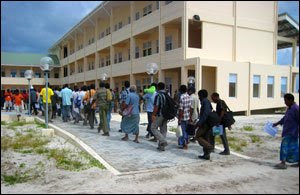 Just one final step to go: Community members arrive for the lottery.


Ahmed’s family have received two houses. With his two sisters, who are married to men from the nearby and former host island of Ungoofaaru, his family has just enough rooms for everyone: his parents, himself and his four brothers.

“But this might change if my sisters or extended family members decide to visit - I might have to sleep in the sitting room,” he notes.

He added that he was happy because Dhuvaafaru is just ten minutes away from Ungoofaaru by speedboat. “I will continue doing my job and seeing my sisters while dedicating free time to making my new island a better place.” 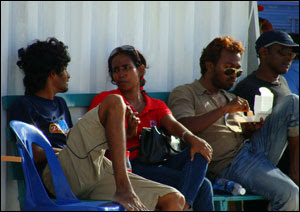 Satisfied: Ahmed chats with Mariyam, IFRC’s recovery officer, after ensuring that all lunch packs had been delivered.

Besides lending a hand during the lottery, Ahmed is a key member of a youth group that had earlier sought support from the IFRC to sensitize the community about environmental and social issues. IFRC provided them with the means of transport, and by the end of December 2008 the group had conducted awareness sessions on two islands.

Ahmed explains: “Our presentations are focused on waste management, which is one of the biggest problems facing most islands in the Maldives today.”

He added that as their community is moving to a new, clean island they must learn to keep it pristine and beautiful. “That is why we are taking every little opportunity to create awareness and to provide information on proper management of household waste,” he says.

When asked what his dream was for Dhuvaafaru, he said, “to mould teenagers who roam idly into hardworking youths. If I can do something – however small – to bring that generation back on track, the future of Dhuvaafaru will be brighter.”
In the meantime Dhonna is thinking of how he will best achieve that dream. 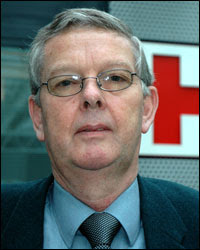 Jerry Talbot, Special Representative for the tsunami operation of the International Federation of Red Cross and Red Crescent Societies 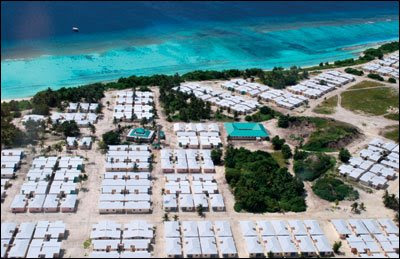 An aerial view of Dhavaafaru Island some months ago. Today the project is complete.

On Monday 2 March a ceremony was held to mark the hand-over of Dhuvaafaru Island in Raa Atoll, where the International Federation of Red Cross and Red Crescent Societies (IFRC) has created new homes for more than 3,700 people who were displaced from their original island after the Indian ocean tsunami struck in 2004. The ceremony was officiated by His Excellency Mohamed Nasheed, President of the Maldives.

The IFRC began work on Dhuvaafaru in April 2006 when the 40-hectare coral island was uninhabited. In just under three years, and at a cost of 32 million US dollars, the island has been transformed into a thriving community that boasts 600 houses, three schools, an island administration block, an auditorium, a health centre and a sports stadium. IFRC has also built amenities including the island’s power plant, sewage system and roads.

“Developing a whole uninhabited island into a ’safe island’, which is now home to almost a 4,000-strong population, is indeed quite a feat,” says President Mohamed Nasheed. “The government appreciates the generosity and humanitarian work of the Red Cross and Red Crescent in the Maldives and throughout the world. I’m sure all Maldivians are very grateful for the Red Cross and Red Crescent’s partnership with the Maldives in rebuilding the country following the tsunami.” 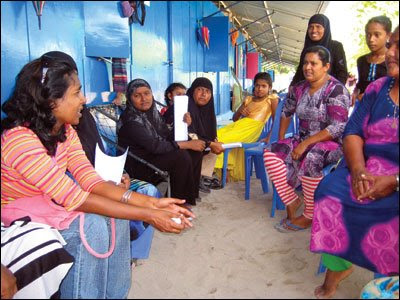 Community consultation has been a crucial part of getting this programme right. Here a Red Cross volunteer talks to villagers about their needs.

Upon arrival, President Nasheed unveiled a commemorative plaque and make a tour of the island, together with representatives from IFRC and the Red Cross societies of America, Canada, Japan and New Zealand, who have supported the construction effort alongside the national societies of Australia, Germany, Hong Kong, and United Arab Emirates.

Establishing an entire community on a small island in the middle of the Indian Ocean presented the IFRC with many logistical challenges. As the island lies 185 kilometres north of the capital, Male, thousands of tons of cement, construction materials and machinery had to be brought in by ship, together with the 600-strong labour force, many of whom came from countries as far afield as China, Indonesia and the Philippines.

The new inhabitants of Dhuvaafaru originate from the neighboring island, Kandholhudhoo. With no reef to protect it, the tsunami swept over Kandholhudhoo and the government decided to relocate the entire population. For the past four years, the islanders had remained scattered in temporary shelters over five different islands in the Raa Atoll. In December 2008, they relocated to Dhuvaafaru.

”This is the biggest, single construction project that the IFRC Secretariat has ever undertaken”, explains Per Jensnaes, head of IFRC delegation in the Maldives. ”It hasn’t been easy but we have certainly provided a much safer environment for people to live in where they will be better protected from any future natural disaster.”

As well as managing the physical construction of the settlement, the IFRC has also been closely involved in training-up community members to run and maintain the island’s infrastructure. Two groups of volunteers now look after the island’s state-of-the-art powerhouse and water and sanitation systems. Due to water scarcity, each home has been equipped with a 2,500-litre rainwater harvesting tank and roof guttering to capture every precious drop of rainfall.

According to Ali Wahid, a member of the new community on Dhuvaafaru, “In some ways the tsunami was the best thing that could have happened to us. Our prayers have been answered, we have a new island and the community is back together again. What more could we hope for?

Thanks to Necephor Mghendi in the Maldives for much of the information above.
Posted by Bob McKerrow - Wayfarer at 17:56

Kia ora Bob,
Another chapter of good tidings in a world where these successes need to be shared. Where is the media for stories like this?
"to mould teen agers who roam idly into hard working youths...", I would love to send my son Taylor to shadow Ahmed for a few weeks.
Cheers,
Robb

Robb, there is so much good being done where ever you care to look.

But I read the NZ papers every day on the web and its about murders, rape, bashing of pensioners, incest, cheating, lying etc., no one writes about the one million school children who got home safely today.

I am sure we can find and Ahmed to shadow. Anything is possible.

Maldives vacations. This is the 1st step for your Maldives Holidays. With over 100 Maldives resorts suited for perfect Maldives Vacations for any holidays.

Hi, nice blog & good post. You have beautifully maintained it,Its really helpful for me, hope u have a wonderful day & awaiting for more new post. Keep Blogging!
Lynam's Hotel says:
“Interesting post, we shall be following your blog more closely in future! Best Wishes from Our Team ”

Wow it is really great to see such beauty of green in Maldives,now i can say Maldives is going to be a complete holiday destination.
Thanks