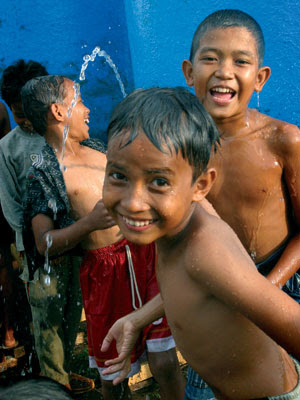 IN OUR WORLD TODAY :


On 22 March we commemorate World Water Day and I felt it would be useful to reflect on the water and sanitation work we have done in Indonesia since the Tsunami.

So what has the Red Cross done in Indonesia? Almost 300,000 people in the Tsunami operational area now have access to new or improved sources of clean water. Another 221,000 already have access to improved waste management facilities or improved latrines - either family latrines or public latrines, serving 20 people or less per latrine. In many cases, the Indonesian Red Cross (PMI) RC/RC partners are the major supplier of such services. An example is the solid waste management programme in Gunung Sitoli, the capital of Nias, which was completed by the Red Cross/Red Crescent in February 2008 and reaches 26,600 inhabitants, or half of the city’s population. 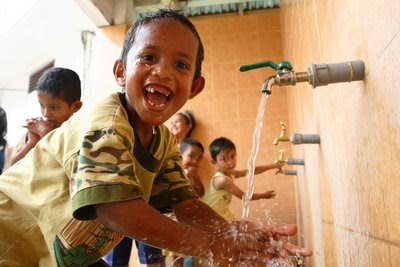 A lot of hard work is behind these figures. In the first days of the operation, Red Cross & Red Crescent water & sanitation experts deployed a combination of mobile treatment plants, tanker trucks, water storage containers and tap stands to deliver safe water to tens of thousands of people. PMI volunteers were trained to maintain the equipment and to perform regular water quality inspections – and the communities themselves have taken over some.

The scale of the devastation in Aceh required a decisive and coordinated response from the water & sanitation teams. At the height of the emergency period, Red Cross/Red Crescent water & sanitation units processed and distributed 1.5 million litres of water per day. And within 24 hours of the cataclysm, PMI volunteers distributed tens of thousands of fresh drinking water bottles. This rapid and massive response is largely responsible for the avoidance of outbreaks of waterborne diseases such as cholera, typhoid fever and chronic diarrhoea which can sometimes kill on a scale matching that experienced in the immediate disaster.
PMI volunteers were trained to deliver PHAST (Participatory Hygiene and Sanitation Transformation) programme training to help establish community understanding of the importance of water hygiene, and for water and sanitation infrastructure needs to be locally identified and supported. 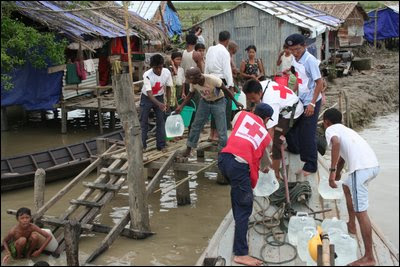 Seven Emergency Response Units sent by Red Cross and Red Crescent Societies from all over the world have been deployed all across Zimbabwe to provide clean water and help with treating people infected with cholera.Photo: Tomas Arlemo/Swedish Red Cross

Diarrhoeal diseases on the rise, warns the IFRC

Diarrhoeal diseases, such as cholera, are increasingly becoming the major cause of recurring disease and death throughout the world, especially in sub-Saharan Africa, warns the International Federation of Red Cross and Red Crescent Societies (IFRC) on the occasion of World Water Day. Its own statistics show that in 2007 and 2008, around 60 per cent of all requests submitted by National Red Cross and Red Crescent Societies for allocations from the IFRC Disaster Response Emergency Fund (DREF), were directly or indirectly related to outbreaks of acute diarrhoeal diseases. This is about 35 per cent more compared to similar statistics in 2006.

“We have noticed a significant increase in the number of operations undertaken to respond to acute situations, especially in sub-Saharan Africa, most recently in Zimbabwe,” says Uli Jaspers, Head of the IFRC water and sanitation team in Geneva. “This trend is the combined result of poor hygiene practices, lack of awareness of disease transmission and a shortage of safe water. Poor sanitation linked to unplanned urbanization is also a major factor. This is further complicated by the effects of climate change which have led to an increase in the frequency and intensity of floods and related epidemics.”

“Humanitarian efforts have had some impact, but data suggests we may be losing the battle. This is especially true in countries affected by extreme poverty and conflict, where diarrhoeal diseases have become endemic. Such countries now require long-term commitment if this worrying scenario is to be pushed back, says Jaspers. 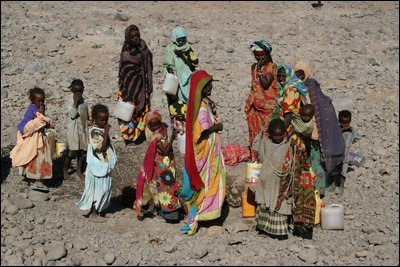 Access to water remains a major problem for millions of people worlwide. The average distance that many women and children in Africa and Asia walk every day to collect water is six kilometres. Bringing clean water to villages is part of the IFRC longer term action on water and sanitation. Photo: Alex Wynter/International Federation

Just before World Water Day, the IFRC published a brochure explaining simple methods for people to treat water in their homes, especially in emergency situations or when conventional water-treatment facilities are no longer operational.

“As we mark World Water Day on March 22, we need to remember that nearly a billion people worldwide lack access to safe drinking water,” explains Dominique Praplan, Head of the IFRC health and care department in Geneva. “Ensuring that people have basic knowledge to avoid infection from water-borne diseases is fundamental if we are to reduce the number of deaths caused by the consumption of infected water.”
Posted by Bob McKerrow - Wayfarer at 15:27

I'm enthralled by the great work the Red Cross is doing in the East Indies and elsewhere. Your reporting of the projects completed since the Asian Tsunami of 2004 is highly commendable. So sad that international media only focus on reporting crime and violence. So much good is being done by dedicated people who give of their time and expertise to the less fortunate people in our world and no doubt, the work that you do in Indonesia places you in that benevelent catagory of humanitarian workers; and where can we find such reporting of such good news in mainstream media on a daily basis? I ponder.

The success in your type of endeavour can only be measured in terms of one human life saved is as much as thousands or more have been saved. Yes indeed, clean drinking water saves lives for clean water is life; and getting clean drinking water to the remotest parts of the country is one of the best strategic goals being shouldered by the Red Cross.

Thank you Bob for keeping me through your blog au fait with the work of the Red Cross in Indonesia.

It's a disturbing figure that over 1 billion people do not have access to clean water in our world.

The volunteers of the Indonesian Red Cross do a wonderful job and are a real inspiration to work with.

Thanks for your encouragement Paterika.

Kia ora Bob,
I write again, and as Paterika alludes to, where are these events placed in our media. Instead we read always of doom and gloom in the economies of the world, shooting rampages in the states and Germany. I, like Paterika, ponder as well.
This post brings home to me the relative non chalance we in the western world give to water. As if was our inaliable right to turn on a tap and have clean potable water to drink. We get upset when not having the option of HOT water. Again, part of that disconnect between worlds perhaps.
Bob, thank you for celebrating a success here with us, your place has become my "daily newspaper", and also for the reminder of the fact that while there are battles being won here, the war still goes on.
Cheers,
Robb

You comment "we read always of doom and gloom in the economies of the world, shooting rampages in the states and Germany," and ask where is the good news in the media ?

The good news is out there Robb, but rarely on the front page. If the media were actively promoting the outstanding work done by global voluntary organisation around, such as Ahmed's story in the Maldives, there would be greater support for humanitarian work which reduces poverty and its guises:, disease, exploitation, lack of access to water, marginalisation, unemployment etc.

I am always excited when caring people like you and Paterika throw in your support for what we are doing. The moral support, the advocay you do all makes a difference as it increases awareness.

Ablai has his football on Saturday and a on Sunday mini-marathon so that will be a welcome break from work.

Haha good on you Bob, Its a great tradition shared by people all over the world, watching your kids play sport.

Interesting reading that stuff about water. With some friends I'm working on a little project with water in Tello, the island Penny and I visited last year, have been meaning to ask you about any contacts you might have in Nias, Sibolga or Padang, for sourcing water tanks, guttering etc. Will probably email you about it.

Yeh, taking the kids to football is a lot of fun and for me a chance to walk in a clean, green corner of Jakarta.

Jamie, I would be happy to help you and Penny to carry out some watsan work in Indonesia.

Yeh, taking the kids to football is a lot of fun and for me a chance to walk in a clean, green corner of Jakarta.

Jamie, I would be happy to help you and Penny to carry out some watsan work in Indonesia.