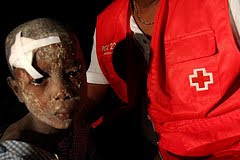 Paul Conneally my colleague and friend in Geneva should have arrived in Haiti by now. Here is his latest posting from his blog:

The news reached me as it happened, at around 23h00 Geneva time. Twitter and Skype burst into action and since then it has been non-stop (hence the delayed blog post altho I have managed to tweet a bit with the emphasis on sharing content).
I began this job in August 2008 and the first major disaster I was involved in was the horrendous suffering caused by the Hurricane season in 2008 which repeatedly battered Haiti and sparked off several fatal landslides. Four major hurricanes - Gustave, Fay, Hanna and Ike - cruelly emptied their cargo ontop of the population, stripping away 98% of the top soil and the rampaging waters killed more than one thousand people.


For this to happen in any country would set it back a generation but to happen in Haiti, the most impoverished and under developed country in the world - well this was simply cruel and disproportionate. Almost impossible to get back up on your feet again. But Haitians are resilient people and arise they did though understandably still haunted by hurricanes. And now, to fall victim to a devastating earthquake is the cruelest of blows to this struggling nation (interesting that we don't name earthquakes - surely they are worthy of such acknowledgement?).


From an operational point of view our local partners, the Haitian Red Cross, have been hit hard - buildings (where we also have our offices) damaged and personnel still missing. Nevertheless, their first instinct was to clear the rubble and set up an operational centre to tend to the wounded with emergency first aid and reinforce the search and rescue operation with their 2000 or so trained volunteers. Focus was also placed in parallel on getting operational, assessing the situation and coordinating the 'surge' capacity needed to boost water, shelter, food and medical activities.


It has been an incredible 36 hours or so. From a media point of view there is a level of interest of tsunami proportions. We have done interviews around the clock with all major news and media networks including CNN, New York Times, Al Jazeera and BBC et al. We also managed to get some great photos out which were used widely on as leads on all major news networks and this morning we received these images from our first proper aerial assessment. The photos were taken by American Red Cross delegate Matt Merrick on the ground and I found them to be extremely intimate and compassionate, retaining full respect for the dignity of the people and not preying on gore and horror like so many others.

Our next big challenge will be to provide our national red cross and red crescent societies around the world with compelling content to support their national fund raising drives, as well of course to maintain and feed the media interest and help to tell the story of Haiti as honestly as possible. I am leaving in the next hours for Haiti via Santo Domingo and will do my best to post from their, certainly thru my Twitter account. At times like this you realize the privilege it is to have an opportunity to contribute to such an important humanitarian operation - I am especially looking forward to supporting, working alongside and learning from my colleagues with Haiti Red Cross. Stay Tuned.
PC
If you want to read Paul's blog, go to Favourite Blogs on my home page. Bob

A sobering read Bob. It's good you share this and it's certainly raised my awareness, and I'll share it also.

I'm not sure why this awareness is increasing for myself and it's all a bit serendipitous, and even right now I've a new friend staying a few days and she's been in Ethiopia doing aid work. I've yet to hear all her tales, but once I catch up on sleep and relax post carrying a heavy pack [normally would not but the dad in me insists] I intend hearing her story.

Thank you Bob for your latest update on Earthquake in Haiti and the humanitarian efforts being continually carried out by your colleagues in the Red Cross. The disturbing graphics being belt out on my favourite media around the clock is disturbing to my nerves and those flash backs I can do without. Thank you for keeping au fait with what is happening in Haiti without those creepy graphics adding to my misery. Take care..

Paul is in Haiti now and you can keep up to date by checking him on twitter: www.twitter.com/conneally

Isn't the various social networking tools amazing ? What a tragedy ! The Red Cross is really there is force with field hospitals, SAR teams, and lots of water purification units and food items.

Kia Ora Paterika !
The images coming out are disturbing but highly competent people are on the ground to tend the huge array of needs.

We have all learnt from the parable of the Good Samaritan I hope,