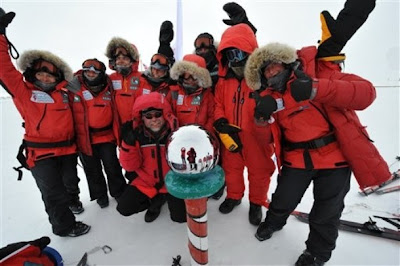 In this photo taken Friday, Jan. 1, 2010, the participants of Kaspersky Commonwealth all women South Pole expedition, pose with the expedition founder, CEO of Britain's Kaspersky Lab, Russian born Eugene Kaspersky, at base camp in Patriot Hills in Antarctica, after their 904-Km (562-miles) cross-country skiing expedition. Eight women from the Commonwealth countries of Cyprus, Ghana, India, Singapore, Brunei, New Zealand, Jamaica and Britain took part in the ski expedition across Antarctica, arriving at the South Pole on Tuesday, Dec. 29, 2009. One of the eight, Kim-Marie Spence, 30, from Jamaica, was forced to quit the adventure after suffering frostbite just three days into the 40-day journey. 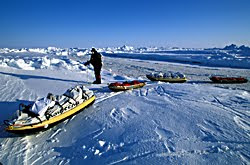 A Twizel woman who was part of an all-female expedition to ski to the South Pole has just returned home - mission accomplished.
Kylie Wakelin only got the call to go on the expedition in October but says it was a real adventure that also brought with it some unexpected pay-offs.
While Wakelin may be New Zealand’s first woman to ski to the South Pole she says she never set out to collect lofty titles.
“Really for me the journey was what it was all about and the relationship I've formed with the girls has been far more moving and significant for me than I thought it would be” she said. 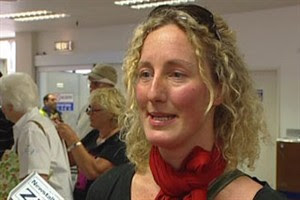 When the initial squad of 16 began training in Norway last February it highlighted the huge task ahead.
Once they were underway the group of 8 quickly became 7 - one member was forced to pull out due to frost bite.
Wakelin said “That was a huge wakeup call for us and it was like this is serious stuff, you can't relent for 10 minutes because it's so cold” she said.
The dangers were also very real for Wakelin’s anxious mum Maye Dunn.
“It was a worry for a start but as she got into it we weren't quite so worried” she said.
Wakelin says while she was on the ice she dreamed of relaxing beach holidays and marmite on toast but she's already planning her next Arctic adventure 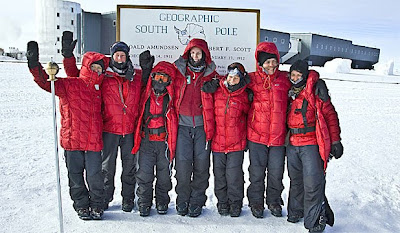 The team at the South Pole

Each woman has towed an 80-kilogram sled loaded with food, fuel and equipment for the past 39 days - skiing for six to 10 hours a day - to travel nearly 900 kilometres to the pole and mark the 60th anniversary of the Commonwealth.
The group was airlifted from the pole back to their starting point, a commercial expedition base at Patriot Hills, before flying back to London via Chile.
The women will soon have their first showers since November 12, with each rationed to one baby-wipe tissue a day for hygiene.
Wakelin stepped in as New Zealand's representative in early October after the expedition's British leader, Felicity Aston, axed a New Zealand Army doctor, Major Charmaine Tate, 33.
Tate had trained for the expedition with the international team in Norway and New Zealand.
Aston said at the time that the "team dynamics weren't quite right, so I decided to change the personnel before the team got anywhere near the Ice".
Wakelin was selected after spending 16 years running Glacier Explorers' boat trips in the small lake at the foot of the Tasman Glacier and taking part in ski-touring and mountaineering expeditions, as well as working for the British Antarctic Survey.
Christchurch was an appropriate place for Kylie to arrive after her historic expedition.
Explorers associated with both Christchurch and Antarctica include Robert Falcon Scott who left from the port of Lyttelton to again try to reach the South Pole after his earlier attempt had failed. Terra Nova returned to the port in 1913 bringing news of the death of Scott and his four companions on their way back from the South Pole.

Norwegian explorer, Roald Amundsen was the first to reach the South Pole in 1911 and later gave a popular public lecture in Christchurch. In gratitude to the Canterbury Museum for their help, he donated the penknife used to cut the flagstaff marking the South Pole; and Irishman Ernest Shackleton who first travelled to Antarctica with Scott but was invalided out and later tried again with his own expedition on Nimrod.

For people bought up in Christchurch during the 50s and 60s – a period of intense activity in the Antarctic – ‘Operation Deep Freeze’ and the early morning sound of DC3s heading ‘to the ice’ are part of our imbedded personal history and its seems highly appropriate the International Antarctic Centre should be sited there.
Monika Kristensen, the Norwegian glaciologist passed through Christchurch in 1986/87 en route to Antarctica with her dog team.

For me, I left Christchurch for Antarctica in October 1969 where I spent 13 months at the remote Vanda Station in the Wright Dry Valley. So Christchurch as a gate way to Antarctica has an emotional attachment for many of us who have spent time in Antarctica.

Congratulations Kylie for a wonderful achievement. We are immensely proud of you.

kia ora Bob
wow that's quite something. Can imagen the risks. I went skying in the dolomites (never could get it under control but it was beautiful there) and we had to do exercises while skiieng to stay warm. Can't imagen it it even colder.
Must be quite an experience to live in Antartica for so long. I bumped here a few times into amercians who were heading for Antartica. Tot ziens ( ka kite ano)

I think we should all be proud of Kylie Wakelin's achievement.

The Dolomites are such a beautiful range of mountains. I can imagine how cold it must have been.

Living in Antarctica was the most impressionable experience of my life. 13 months alone with 3 other people.

Of course, the dictatorship in Egypt is far different than what the vast majority of Americans face.
The newspaper printing machines available online these days are superior in performance.
This is where the online websites play quite a vital role.

Assemble your guests in teams, set out clues and people to actually talk to.
Somerset House Between 1776 and 1786, Somerset House wasbuilt
on the site of a Tudor mansion built in 1547 by Edward Seymour, Earl of Somerset and uncle to Edward VI of England.

Take a look at my blog post: egyptian newspapers

Located near Statesville North Carolina in the town of Hiddenite, which is named after the gem found at the mine.
Now repeat the process by mining and dropping
simultaneously. Gold is a platinum widely adorned and also highly
valued globally.

If you don't see any bugs or if you can't determine the reason why
the plant is looking sick, take a sample in to the local
county extension office. Use the cultivator to make
holes in the soil and turn it up just a little between the rows.
Try these top five organic garden weed controls that actually work.

After application the hair is simply dried,
either naturally or using a drier. Habits die hard and whatever your regime has been in the past, you do need
to have a good look around at what is on offer for different
hair types and textures. Its intention is to offer you ideal cosmetics which are
safe and substantial in quality, all the way through the world.

The Palestinian leader Mahmoud Abbas' recent drastic reorganization of the national security is one sign to this effect. The advert designs can range from being simple text affairs that are very basic, which also tend to be less expensive, to the more expensive, fully graphic designed adverts with photo quality images that can take up a whole page of the newspaper. That may be, the temperature that is certainly most effective for catching fish. But Punjabi news paper has the upper hand because almost population speaks Punjabi, the official language of Punjab. This also means that you trust those who have already used the products and know how they are used.

Your way of explaining all in this post is in
fact pleasant, all can effortlessly know it, Thanks a lot.


Feel free to surf to my homepage: how much should i weigh

Whether you are searching for specialty styling products or
specific Loreal hair products, you are sure to find what you need.
Before you go for them, try products at Keranique for hair
care. A well groomed woman will look to her hair and makeup
first and a poll of 3,000 females across the UK revealed that about 44% feel attractive if they are having a good hair day, this compares to 16% who felt pleased with their
appearance if good teeth gave them that winning
smile.

The hosts file is a popular, cross-platform way of blocking access to certain domains, such as ad-serving websites.
Before you apply heated gadgets onto your hair, protect your hair with heat protectant sprays and also serums.
I confess that I was a little bit skeptical at initially. From my experience, it is quite difficult to style
hair immediately after a hot oil treatment, so you might want to
skip the curling iron or hot rollers. Goodness of traditional herbs work wonders
for colored, straightened and chemically treated hair.

Also visit my webpage: how to grow hair faster