Haiti: Joe, the boy from nowhere 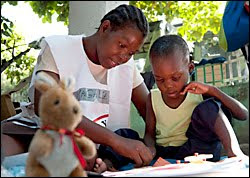 
The first time we saw four-year-old Joe was heartbreaking.

He was barely able to sit, wiping crumbs off the little cardboard mat that had become his home. He cleared a space to sleep, like his mother would have done, his eyes rolled back in his head, and he slumped into a daze.

Joe came from nowhere. Someone noticed him lying naked on the ground and he was brought to the Norwegian Red Cross field hospital in the centre of Haiti’s shattered capital.

Mageli started to interact with the sick child and, after a day or so, she’d got his name. She gave him a pen and paper, and he drew his mother and father.

Then she gave him a toy phone.

“He started speaking to his mother. I asked him what she was saying. He told me: ‘She says don’t look for me, I’m dead’.

"I don’t know how he knew, someone must have told him before he got lost.”

Three days on, Joe’s doing well. He's still sick, but is taking water and a little food. He draws us a cross. I tell him my name is Joe too, and he gives me a long, deep look.

He’s a beautiful, fragile little boy, with a slight squint that makes him look even more vulnerable; makes you want to protect him.

Mageli agrees. “You have to really know yourself before you know other people,” she says. “That’s why I take care of Joe, to know what he needs. I can’t give people any money, but I can help in my own way.”

If Joe has no family members who can take on the responsibility of caring for him, the little boy will go to an orphanage as soon as a suitable organization working with orphans can be found. And he’ll do fine. He’s a survivor.

Article by Joe Lowry IFRC. Joe arrived in Haiti four days ago and it continuing the brilliant media coverage started by Paul Conneally, who is now back in Geneva

What a heartbreaking story. One of the so many It is just incomprehensible that these kids have to deal with so much so early. He survived and he will do it again. Thanks to angels like mageli who help him he will get stronger

A heartbreaking story and there are thousands more. With 150,000 people killed, there must be so many families decimated. I am thankful we have our best people on the ground helping out.

Thank you :) check out this emo boy one over this blog:
http://www.emo--boys.info