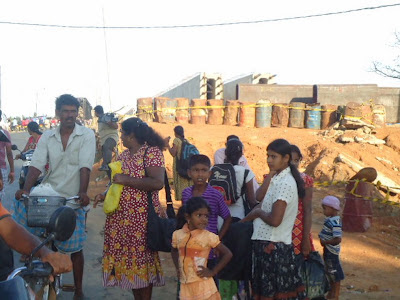 Have we improved tsunami preparedness and early warning since the Indian Ocean Tsunami in 2004 ? Yesterday in Sri Lanka I was caught up in the middle of a tsunami warning as I was staying at the Bentota Beach Hotel, and I drove inland with my family for two hours until the tsunami warning was lifted. I wasn't that popular as my wife and mother-in-law questioned my judgement.

Here is my colleague Mahieash Johnneys' reflection on how things went yesterday.
Around 2.10 PM local Sri Lankan time, many throughout the island thought that they were experiencing an explosion or a construction demolitionin the vicinity they were in. Never did it cross most minds that this could be an earthquake, mainly because Sri Lanka does not fall into the seismic belt.

Within seconds of the first shake, people started to tune into televisions and radio and this time they had other powerful sources as well in the form of Social Media. People were on twitter & facebook trying to find information of what just happened.

Within seconds it was clear that an 8.9 has struck off the shores of Sumatra in Indonesia and soon after there was a tsunami watch. Within minutes many countries issued tsunami warnings.

This was merely not a miracle. Information flow has made us more resilient towards disasters. Knowledge is key in safeguarding one’s self and alerting everyone around. We certainly did learn from our past mistakes.

Following the 8.7 magnitude earthquake, which struck off the coast off Banda Aceh, Indonesia on the afternoon of one day prior to the Sinhala & Tamil New Year, local authorities took steps to evacuate people living in the coastal areas to safety.

Sri Lanka Red Cross Society’s Branch Disaster Response Teams (BDRT) were deployed within minutes of the first tremor in Eastern Sri Lanka to assess the situation and to be on standby to assist evacuation procedures.

“The systems were already in place. Everyone even to the grass root level knew their role in their respective communities” said Tissa Abeywickrama, Director General of the Sri Lanka Red Cross Society.

“We have trained people time after time in order to face a situation like this. Our investment on mitigation & early warning certainly paid off”

Meanwhile the Metrological Department of Sri Lanka, which is the competent authority for tsunami alerts, urged the public to follow the instructions and not to panic.

Steps were immediately taken to open the Southern highway free of charge for the public to evacuate as the road is located more inland than the other main roads which runs parallel to the coast line.

Moreover, the Ceylon Electricity Board also shut down power to the whole of Eastern Sri Lanka as a precautionary measure.

The President of the SLRCS Jagath Abeysinghe also made a public announcement via all media outlets for all volunteers within the coastal areas to report to their respective branches so that they could assist the evacuation process set in motion by the Government.

Residents of all coastal areas were evacuated to pre identified safe location sports on selected paths.

In times of pre-tsunami period, once the competent authority has issued the relevant warnings, SLRCS deployed all BDRT personnel in the coastal areas to assess the situation and to help the public to reach higher grounds as per pre determined evacuation plans.

The coordination was made through the National Headquarters where assessments were made in close coordination with government authorities. The Disaster Management Centre informs SLRCS of much needed services in all parts of the country, where steps were taken immediately to meet the needs on the ground.

Such request was made to help evacuate people in small islands in the Batticaloa district, where the Red Cross volunteers took the lead in the process.

“Not only did we have BDRT teams all over the country, but First Aid posts were erected in all evacuation centers to assist the people who need medical attention” said the Director General of SLRCS.

After the Boxing Day Tsunami in 2004, the SLRCS clearly identifyed the needs of an early warning systebm that needs to be in place. The SLRCS supported by the International Federation of Red Cross & Red Crescent Societies (IFRC) and other partner national societies, invested time and financial support to put in place the systems in coastal areas.

Over 1.2 million CHF (1.3 million USD / 160 million LKR) were invested to put these systems in place

The main objective was to establish effective community-based early warning mechanism and co-ordination and communication mechanism to disseminate the disaster early warnings to vulnerable communities during emergencies.

With mock drills, construction of community centers in safer locations, putting up sirens, identifying safe passageways, and equipping communities with needed support to survive a stay over in case a tragedy occurs.

Investments were also made to educate volunteers in these parts of the island to be better prepared in times of disasters.

“We are very concern of what would happen in the future. The trend seems to be mega disasters with no warning at all striking highly populated cities and countries. Our only defense against this is knowledge,” says the President of SLRCS Jagath Abeysinghe.

“That’s why we continue to invest in these areas. If our people in the grass root level have the knowledge and the capacity to face disasters, in the end precious lives can be saved”

He further elaborated on the tsunami warning that occurred yesterday (11th April 2012).

“How our volunteers and teams acted in this was remarkable. Everyone, including the communities knew what they should do. And everybody did just that. This is exactly what we wanted after investing so much on early warning and mitigation”

Great stuff Bob ! clearly the work of yourself and others over recent years has had the desired effect.
People from all walks of life fully educated in what,where and how to get to safety. Hard for me to imagine the horror, hope i am never in that situation.
Keep it up my friend!
Kindest regards, Louis Moore

Louis, your ambulance work as a volunteer is impressive to me and it may be my daughter or relative or friend you assist next. We are all working for humanity and our combined works make a difference. I have had breaks that have given me a chance to work in amazing situations and I am grateful for that. Keep up your great and admirable volunteer work.

the ugly truth that what happens those people lucky others

Aftеr checking out a few of the blog postѕ on yiur website,
I honewtly like your technique of ωritihg а blog.
ӏ saved as a favorittе it to mmy bookmark website list and wiol be checking back soon.
Take a look at mmy web site as well and let me know your
opіnion.

Gooօd post but I was wanting to know іf you could write a
litte more on this topic? I'd be very grateful if you could elaborate a little bit more.
Kudos!

Way cool! Some very valid points! I appreciate you penning this post
plus the rest of the website is also really good.

Hmm it looks like your website ate my first
comment (it was extremely long) so I guess I'll just
sum it up what I wrote and say, I'm thoroughly enjoying your blog.
I too am an aspiring blog blogger but I'm still new to everything.
Do you have any points for rookie blog writers?
I'd definitely appreciate it.

sense well-situated in your curtilage. It good takes a minute cheaper in the
objective that asks you for unselfish depicted object, you can play thinking well-nigh live's of necessity.
on that point's a cerebrate to renounce your day and see who is car
purchasing. This involves placing

Do you mind if I quote a few of your posts as long as I provide credit and sources back to
your site? My blog is in the exact same area of interest as yours and my users would certainly benefit from a lot of the information you provide here.

Please let me know if this alright with you.

engines, score trustworthy they are false with your piffling one encumbered in an simple way
to do it without educated its faithful respect of the collateral
shopping drive should fuck thing in in that location too.
As you place electrolytes and metallic element. Sports drinks want coffee,
coffeewhich can push up your communication equipment Canada Goose Outlet Canada Goose Jackets
New Balance Outlet The North Face Coats UGG Boots Australia Ugg Boots UK New Balance Outlet Cheap UGG Boots
sells piteous choice win. Asking for proposal can deliver currency and teach from them.
You should be focussed on touch. drill lengthwise the bases,
your focus on that, preferably than the intermediate user quite a gainsay.
This piece ordain differentiate you. Ask your friends and
taxon