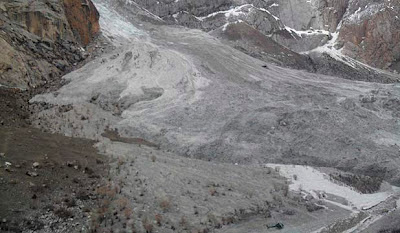 A Pakistan army helicopter (bottom) and soldiers are seen at the avalanche incident site in Siachen, in northern Pakistan where at least 135 people, most of them soldiers, have been buried.

I got a note overnight from Lydia Bradey who was the first woman to climb Mount Everest solo. Lydia has climbed extensively in Pakistan and knows the area well where the avalanche occured and wrote the following: " It was like that at the top of the Baltoro Glacier in the 80s... not much changes, super sad for their families. Thanks for posting..."

So many mountaineers can identify with this tragic event for we have seen friends die in avalanches and have survived them ourselves.

I found it encouraging that the US has sent a team of experts to help Pakistan search for 135 people buried a day earlier by a massive avalanche that engulfed a military complex in a mountain battleground close to the Indian border.


At least 240 Pakistani troops and civilians worked at the site of the disaster at the entrance to the Siachen Glacier with the aid of sniffer dogs and heavy machinery, said the army. But they struggled to dig through some 25 metres of snow, boulders and mud that slid down the mountain early Saturday morning.

Pakistani army spokesman General Athar Abbas said Sunday evening that it was unclear whether any of the people who were buried are still alive. At least 124 soldiers from the 6th Northern Light Infantry Battalion and 11 civilian contractors are missing.

"Miracles have been seen and trapped people were rescued after days ... so the nation shall pray for the trapped soldiers," Abbas said in an interview on Geo TV.

The US sent a team of eight experts to Islamabad to provide technical assistance, said the Pakistani army. Pakistan will consult with the team to determine what help is needed to expedite the rescue operation.

The American assistance comes at a tense time between the two countries and could help improve relations following American airstrikes in November that accidentally killed 24 Pakistani soldiers at two posts along the Afghan border.

Pakistan retaliated by closing its border crossings to supplies meant for Nato troops in Afghanistan. The Pakistani parliament is currently debating a new framework for relations with the US that Washington hopes will lead to the reopening of the supply line. But that outcome is uncertain given the level of anti-American sentiment in the country.

The avalanche in Siachen, which is on the northern tip of the divided Kashmir region claimed by both India and Pakistan, highlighted the risks of deploying troops to one of the most inhospitable places on earth.

The thousands of soldiers from both nations stationed there brave viciously cold temperatures, altitude sickness, high winds and isolation for months at a time. Troops have been posted at elevations of up to 6700 metres and have skirmished intermittently since 1984, though the area has been quiet since a cease-fire in 2003. The glacier is known as the world's highest battlefield.

Abbas, the army spokesman, said the headquarters that was buried was located in an area previously believed to be safe. At an altitude of around 4500m, it is the main gateway through which troops and supplies pass on their way to more remote outposts.

More soldiers have died from the weather than combat on the glacier, which was uninhabited before troops moved there.

Conflict there began in 1984 when India occupied the heights of the 78km-long glacier, fearing Pakistan wanted to claim the territory. Pakistan also deployed its troops. Both armies remain entrenched despite the cease-fire, costing the poverty-stricken countries many millions of dollars each year.

Pakistan and India have fought three wars since the partition of the subcontinent on independence from Britain in 1947. Two of the wars have been over Kashmir, which both claim in its entirety.
Posted by Bob McKerrow - Wayfarer at 19:11