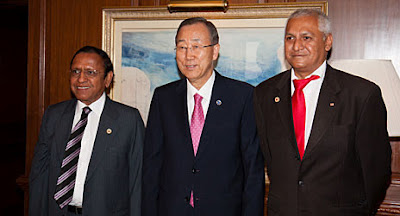 Mr Ban Ki-moon reconnected with his roots on Thursday when he rrived in India this week.  Mr. Ban was a Red Cross youth volunteer himself and deeply appreciated the efforts the Red Cross in providing community based humanitarian services in South Asia.

Of course I was proud that Ban-Ki-moon met my protegee and dear friend Azma Ullat, who is head of our IFRC South Asia regional delegation who I have worked with closely during the past decade.


As part of his three day official visit to India, UN Secretary General Mr Ban Ki-moon held a meeting with Mr Azmat Ulla, Head of the IFRC’s South Asia regional delegation, who was accompanied by Prof. (Dr.) S.P. Agarwal, Secretary General of the Indian Red Cross Society. Dr. Agarwal is a good friend of mine and a tireless worker for Red Cross and Red Crescent in India, South Asia and globally as Chairman of the IFRC health and safety committee. The meeting offered the opportunity to discuss issues including climate change related disasters, community-based health, in particular women’s and children’s health, the role of young people as agents of change today and as humanitarian leaders of tomorrow, as well as how the Red Cross and UN agencies can be more effective in working together.


Mr Ban commended the crucial role played by the Red Cross in promoting humanitarian principles, observing that, “Indian Red Cross, with its outreach through volunteers all over India, is an ideal partner for the UN system to enhance its humanitarian and developmental activities.”

This region, comprising of nearly quarter of the world’s population has high vulnerability, especially to disasters. National Red Cross and Red Crescent Societies should work together with partners such as the agencies of the UN toward realizing the Millennium Development Goals,” shared Mr. Ulla following the meeting.

Prof. (Dr.) S.P Agarwal Secretary General of the Indian Red Cross said, “I am happy to learn that the UN recognizes our long and well established role in humanitarian and developmental areas in close cooperation and with the support of the government of India.”

I have worked in this region for a fair part of my adult life since the Indo Pak war in 1971-72, and am so pleased that SG of the UN is acknowledging the outstanding work done by Red Cross and red Crescent


Thanks to my good Irish mates John Roche, Head, IFRC India and Sephen Ryan, IFRC in New Delhi for the details and the great photo.