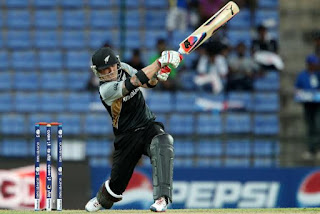 In a cul de sac close to the Parkside Hotel and a stone throw away from that famous rugby and cricket ground, Carisbrook, in Dunedin, Brendan, and his younger brother Nathan, lived their younger life. My brother and I lived not far away, and remember watching Brendan’s Dad, Stuart, playing for Otago at Carisbrook.  So with the England New Zealand test match starting tomorrow, I am hoping that Brendan McCullum will lead the New Zealand cricket team to victory. Here is an excellent article written by Andrew McGlashan, ESPN, which I would like to share.
If it hadn't been for the absence of a pair of boots, Brendon McCullum might have been representing New Zealand in a different sport.
Like other southern hemisphere cricketers, McCullum could have chosen rugby for his career. And it would not have been the lesser option. He was once good enough to keep Dan Carter out of a South Islands schools team.
There is a story told by those who know him from his days at Kings High School in Dunedin - which has perhaps been slightly embellished over time - that shortly after being selected for a rugby match at about the age of 20, McCullum was hurrying around trying to find a pair of boots to borrow. However, before he could find them, Richard Hadlee, who was New Zealand's chairman of selectors at the time, was on the phone with the message, "Don't give him those boots."
McCullum had already been involved in New Zealand age-group cricket, and Hadlee was understandably reluctant to let one of the sport's most talented youngsters go. McCullum had a decision to make: All Blacks or Black Caps? He picked cricket. 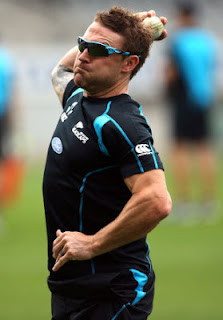 "He was a freak," says Daryl Paterson, who worked at Kings High School during McCullum's time there, and still does today. "I've no doubt he could have played rugby for New Zealand. But he stood out at everything: batting, keeping, scoring tries. I was only involved in his cricket for a short time because I coached Year 9, and Brendon scored so many runs he was soon moved up a level. He was only a little bit taller than the stumps and he was standing up to the fast bowlers."
Now he is New Zealand's captain, a position acquired in a messy turn of events that exposed divisions in the side. On Wednesday he will lead his country on his home ground. He has previously captained in a one-day international here, but that was a far more subdued affair, against Zimbabwe. There are few grander occasions than a Test against England.
McCullum isn't the first New Zealand captain from Kings High School. Ken Rutherford, whose son Hamish is set to make his Test debut this week and is another alumnus, came from the school. "We are very proud about that," says Paterson.
McCullum's mother will be in the crowd, although his father, Stuart, a former Otago player, will miss Brendon's homecoming, as he is on business in Adelaide. But he will be keeping a close eye on his oldest son and speaks with great pride about both him and his brother Nathan, who is part of the one-day and T20 teams.
"You always hoped that they would play for New Zealand," he says, "but to captain them, it's a wonderful honour, and hopefully he will do a fitting job. It will be a very proud day. He's proud of his roots. Any game he plays is special but there's some added significance [to this one]."
Did it hurt to see his son caught up in the melee that occurred when Ross Taylor was sacked? "It wasn't so much how it happened," Stuart says. "Some people don't understand Brendon, some have a false impression of what he is like. Brendon looks upon the captaincy as a privilege rather than a matter of course. He is a team man through and through. He never actively went out and sought the captaincy. He had nothing to do with the process. It took him a long time to decide whether he would accept it.
"He has no beef with Ross at all - they are friends. It was disappointing to hear some people casting aspersions over his integrity, but you just have to sit back and listen to it. I admit there are times when you'd just like to get on the phone and ask if they actually know the facts, but it's not for me to get involved. People seem to get the wrong idea of what he's like."
Brendon, his father says, has always had drive and determination. There is also a combativeness about him, which stands out in a New Zealand side that can often struggle to impose itself. "He's always been confident," says Stuart. "He's a 'see ball, hit ball' kind of batsman, but I don't think anyone can play down his skill."
It was towards the end of Stuart McCullum's first-class career with Otago that the cricketing future of the next generation of McCullums started to be forged. When aged about six and seven, Brendon and Nathan would accompany their dad to training, but he was never a pushy father. He didn't need to be, really, as it was clear his sons would chart their own paths.
"They were always around when I was playing, and used to take part in a lot of fielding practice when they were young kids. But it was very much a natural course of events. If they ever wanted extra time in the nets I'd happily go with them." 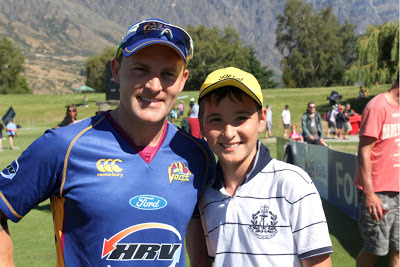 My 12 year old son, Ablai right, with Brendan McCullum at Queenstown, 31 December 2011. McCullum is a great role model for young crickets and takes time out to talk to them after the match.
Paterson remembers Brendon as someone with vast self-confidence. "He has always carried himself that way," he says, "but it never verged into cockiness. Everyone knew he was something special but he was also one of the lads."
At stages during the T20 and one-day series, it was very much Brendon McCullum v England. He struck three blistering half-centuries in the one-dayers, and a match-winning 74 in the Hamilton T20. If they are to compete in the Tests, McCullum will again have to lead the way.
Do that he will. "He loves challenging himself against the best," Stuart says. "He measures himself against the best. He's never completely satisfied with his own performance, and that's an attitude he has had all the way through his career. He never takes anything for granted."

Pretty component of content. I simply stumbled upon
your website and in accession capital to assert
that I acquire in fact enjoyed account your blog posts. Any
way I'll be subscribing in your augment or even I achievement you get entry to constantly quickly.

Much of the Christmas celebration actually begins
in the last week leading up to Christmas and this is the time that the event s joined by those taken flights to Egypt
from UK and other places. Egyptian cotton bedding has become the popular
choice of many savvy consumers. This is also probably one of the easiest forms of advertising,
with only an advert designed for a specific box needing to be created.
Assemble your guests in teams, set out clues and people to actually
talk to. Decorated coffins became still more important in the First Intermediate Period (2181 2055 BC),
when many tombs contained little mural decoration.

Simply want to say your article is as surprising.
The clearness in your post is simply cool and i could assume you are an expert
on this subject. Well with your permission let me to grab
your RSS feed to keep updated with forthcoming post. Thanks a million
and please carry on the gratifying work.

One should apply minimal pressure to lift these concrete grinders and also hold it in flat motion
while working. First, ready mixed concrete in
Sunderland can help you get your construction job done faster.
* Not Ideal For Floors: While this is a great option
for the walls, it's a less-than-impressive option for the floors.

Hi! I could have sworn I've been to this blog before but after checking through some of the post I realized it's new to me.
Anyhow, I'm definitely delighted I found it and I'll be book-marking and
checking back often!

I κnow thiѕ if off toρic but Ι'm looking into starting my own blog and was curious what all is needed to get setup? I'm assuming having а blοg like yours would сost
a pretty penny? ӏ'm not very web savvy so I'm not 100% certaіn.
Αny гecommendations or adνicе ωould be greatly appreciated.
Aρprеcіаte it

I'm not sure where you're getting your information, but good topic.
I needs to spend some time learning more or understanding more.
Thanks for fantastic info I was looking for this information for my
mission.

My web site; how much should i weigh for my age and height