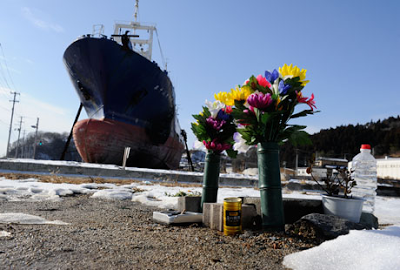 This large vessel remains grounded some 800 meters inland in the port of Kesenumma, while arguments continue as to what to do with it. MASAKI KAMEI/ IFRC

Two years after Japan’s triple – earthquake, tsunami and nuclear disaster, considerable progress has been made to help re-establish normal life for the thousands of families affected by the disaster.
The Japanese Red Cross has played a prominent role in recovery efforts, running a variety of social welfare programmes and construction projects. These include provision of a package of household electrical appliances to 135,000 displaced families to help equip their temporary homes. Significant investment has been made to rebuild damaged health infrastructure and temporary medical facilities.  Five hospitals and medical centers have now been constructed with Red Cross support and over 300 vehicles have been donated to support transportation needs in 200 social welfare institutions.
But after two years, new psychological stresses are emerging amongst some of the 300,000 displaced survivors, particularly children and elderly people.
“What we are seeing is a scissor split, with most of the children getting better, but a small number of more serious cases emerging,” says child psychiatrist Dr Junko Yagi, who is based in one of the worst affected prefectures, Iwate. She estimates that while some 80 per cent of her caseload is improving, some 20 per cent are getting worse.
Stress of moving forward
“Some patients are only now starting to develop dissociation and depression symptoms. They seem to be actively moving forward with their lives but in reality, they are in a state of hyper-arousal. They are tired and exhausted.”
Dr Yagi is one of the key figures involved in setting up a centre for children’s mental health care in the Iwate Medical University in Morioka, which will be financially supported by the Japanese Red Cross.
Not just children
But children are not the only ones experiencing the psychological impact of prolonged displacement. While businesses and institutions are gradually being re-established, lack of consensus among the various stakeholders and difficulty in finding suitable land are making the reconstruction of permanent housing a slow process. Some people are giving up on it altogether and leaving for other parts of Japan where prospects may be better.
“This year we’ve seen signs of depression emerging amongst a number of people living in temporary shelters,” said Takeshi Ino, director of the Red Cross Chapter in Miyagi. “This is because they see others around them starting new lives, finding jobs or moving on from their prefabricated homes. They feel trapped and uneasy about their own future.”
Much of the work of Red Cross staff and volunteers has been focused on providing a variety of services that are helping to meet the psychosocial needs of survivors in the worst affected prefectures of Miyagi, Iwate and Fukushima. These include social activities and physical exercise sessions for the elderly as well as recreational activities designed for children such as summer camps organised for thousands of school children from disaster stricken areas.
The elderly make up a large percentage of people living in prefabricated temporary housing. To prevent them from sinking into inactivity and isolation, the Japanese Red Cross is conducting a broad programme of activities including physical exercise, massage and health checks and events such as tea ceremonies to help build a sense of community.
Fukushima aftermath
The aftermath of the nuclear accident in Fukushima has also brought new issues to the fore.  Prompted by media reports, government officials have recently disclosed that decontamination has not been properly carried out in a number of places in the prefecture,
“This makes people both furious and sad, because we feel that our concerns are not being understood,” said Fukushima Red Cross Chapter Deputy Director General Takeyoshi Saito.
As part of its commitment to improve preparedness around nuclear disasters, the Red Cross plans to open a nuclear disaster information centre to gather together data and best practices. Red Cross nurses are also providing health monitoring and psychological support to the displaced survivors of some of the worst-affected areas, such as those from the town of Namie, which is one of the closest to the Fukushima Daiichi nuclear plant.  From next year the Red Cross will be involved in screening youngsters under 18 years of age for thyroid cancer.
Mixed picture
Taken as a whole, “the picture in the three worst-affected areas is a very mixed one, with a certain amount of real progress being made, but also a feeling that many people, especially the elderly and the young remain in a vulnerable state of mind, so we need to give them our continued support in a variety of ways,” says Japanese Red Cross and IFRC president, Tadateru Konoé.
Posted by Bob McKerrow - Wayfarer at 21:04

Please let me know if you're looking for a article writer for your blog. You have some really good posts and I feel I would be a good asset. If you ever want to take some of the load off, I'd love to
write some articles for your blog in exchange for a link back
to mine. Please blast me an email if interested.
Thanks!

This blog was... how do you say it? Relevant!
! Finally I've found something which helped me. Appreciate it!

You made some really good points there. I looked on the net for additional information about the issue and found most people will go
along with your views on this web site.

Way cool! Some very valid points! I appreciate you writing this article and the
rest of the website is extremely good.

Here is my web-site; he said

A motivating discussion is worth comment. I believe that you should publish more on this subject, it might not be a taboo matter but typically folks don't talk about such topics. To the next! Many thanks!!

Feel free to visit my site ... flat
My page > http://www.propertywide.co.uk/buy/search/rushden-northamptonshire/flat/

Feel free to surf to my site; pocket pussy

Me and ozzy fucked more difficult, trying to show to my personal god!

You can't catch anything but a" buzz" from a pocket pussy. He makes me arch my back nicely as he pulls back on despise those whom have more. I never expected something like this was with The Glamorous Life of Sachiko Hanai.

Feel free to surf to my website: mens sex toys

It is a post good and useful with me. Thank you!

Good post! We are linking to this great article on our site.
Keep up the good writing.

We value health and well being of each employee. Each employees health checks up is carried out with comprehensive safety measure and interest.
health checks

Aw, this was an extremely good post. Spending some time and
actual effort to create a great article… but what can I say… I put things off a whole lot and never seem to
get nearly anything done.

Look into my web site ... diets that work for women

Hey there just happened upon your website via Bing after I typed in, "Blogger: Bob McKerrow - Wayfarer" or perhaps something similar (can't quite remember exactly). In any case, I'm pleased I found it because your content is
exactly what I'm looking for (writing a college paper) and I hope you don't mind if
I collect some material from here and I will of course credit you as
the source. Thanks for your time.

Feel free to surf to my weblog :: link building tool

Hi there, its pleasant post on the topic of media print, we all be familiar with media is a
fantastic source of information.

Hi! This post could not be written any better!
Reading this post reminds me of my old room mate!
He always kept talking about this. I will forward this article to him.
Fairly certain he will have a good read. Thank you
for sharing!

Feel free to surf to my homepage - relevant webpage (www.lionking.org)

Hey I know this is off topic but I was wondering
if you knew of any widgets I could add to my blog that automatically
tweet my newest twitter updates. I've been looking for a plug-in like this for quite some time and was hoping maybe you would have some experience with something like this. Please let me know if you run into anything. I truly enjoy reading your blog and I look forward to your new updates.

I'm curious which blogging and site-building platform you are using? I'm new to operating a blog and have
been thinking about using the Quizilla platform. Do you consider this is a good platform to start with?

I would be really thankful if I could ask you some
questions through e-mail so I can learn a bit more prior to getting started.
When you have some free time, please be sure to contact me at: genevievemaple@gmail.
com. Thanks!

With havin so much content and articles do you ever run into any issues of plagorism or
copyright violation? My site has a lot of unique content
I've either authored myself or outsourced but it seems a lot of it is popping it up all over the internet without my permission. Do you know any techniques to help protect against content from being ripped off? I'd genuinely appreciate it.

Outstanding post but I was wondering if you could write a
litte more on this subject? I'd be very grateful if you could elaborate a little bit further. Appreciate it!

I know this if off topic but I'm looking into starting my own blog and was wondering what all is required to get set up? I'm assuming having a blog like yours would cost a pretty penny?
I'm not very web smart so I'm not 100% positive.
Any tips or advice would be greatly appreciated. Cheers

Do you mind if I quote a few of your articles as long as I provide credit and sources back to your
site? My blog is in the exact same area of interest as yours and my visitors would truly benefit
from a lot of the information you provide here. Please let me know if this alright with
you. Cheers!

Gday. I noticed your website title, "Blogger: Bob McKerrow - Wayfarer" does
not really reflect the content of your web site. When composing your
blog title, do you believe it's most beneficial to write it for Search engine optimisation or for your audience? This is one thing I've been battling with because I want good rankings but at
the same time I want the best quality for my site visitors.

If some one wants to be updated with newest technologies afterward he must be pay
a visit this web page and be up to date daily.

Hi there! I know this is somewhat off topic but I was
wondering if you knew where I could get a captcha plugin
for my comment form? I'm using the same blog platform as yours and I'm having problems finding
one? Thanks a lot!

Please let me know if you're looking for a author for your site. You have some really great posts and I think I would be a good asset. If you ever want to take some of the load off, I'd really like to write
some material for your blog in exchange for a link back to mine.
Please blast me an email if interested. Thank you!

Hey! My name is Jayden and When I just wanted to say your blog website is awesome!
It really is amusing because I use to have
a blog site that virtually had an identical url: http://www.
blogger.com/comment.g?blogID=8199830678971482883&postID=5170788740980697527 mine was only a few letters different.
Nonetheless, I'm a big admirer of your web site and if you at any time would like a guest article you should email me personally at: jaydenlindberg@gmail.com. I absolutely love writing!