Inside Pakistan's only ski school


With just 15 pairs of skis and two or three pairs of poles, Matee Ullah Khan runs the only civilian ski school in Pakistan. He is on a mission to bring fun back to Pakistan's Swat valley four years after militants who had taken over the area were driven out.
Many of the people he teaches use homemade skis, fashioned out of wooden planks with a pair of old shoes nailed into position.
Poles are usually sturdy branches cut from the local trees, hand-knitted woolly hats are the only nod to trendy skiwear.
His school is at Malam Jabba, in the Swat Valley, where in 2007, after Taliban fighters took control, life suddenly changed. Listening to music and dancing were banned - and so was skiing.
Continue reading the main story

The militants attacked the ski school several times, bombing the hotel, smashing up equipment and dismantling the ski lift - a gift from the Austrian government in the 1980s.
"I was very upset, I thought it might not be possible to ski at Malam Jabba again. I love skiing and we grew up here, we love our area, but it was not possible to live peacefully and do our usual activities," Matee Ullah remembers.
"Initially the militants didn't attack the civilian population, but the security situation was deteriorating day by day, and there were suicide bombings and civilians were also targeted. 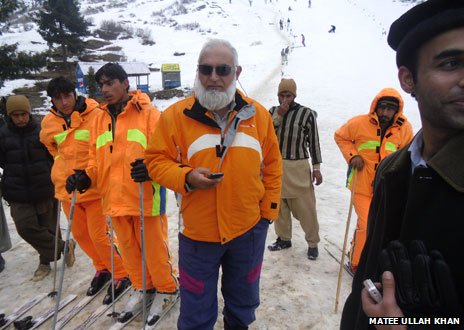 Matee Ullah Khan (centre) is seen here on the slope
"It was very difficult to have a normal life, everyone was so scared, and there was a psychological effect on everyone's mind. You didn't know if you would survive or not, it's very difficult to live like that."
Swat is famed for its natural beauty. It nestles between the tail-end of the Hindukush and the Karakoram mountain range, which boasts K2 as its highest peak.
But skiing has never taken off in Pakistan. Traditionally, Swat is a place where wealthy people make for the hills in the summer months to escape the stifling heat in the cities, but in the harsh winters even locals often migrate south.
Continue reading the main story

"It keeps you alive - especially the spring skiing when the temperature starts to warm, and the snow starts melting, but at night the temperature falls and frozen ice crystals form on the top layer of the snow.
"When you start sliding down it in the early morning, breaking that ice, it produces a very good sound and you can feel it down your skis. We say that having one run on this spring snow makes you young for a year."
Between 2007 and 2009, when the Taliban were in control of Swat, skiing was not an option.
But Matee Ullah Khan, who represented Pakistan in the skiing competition at the Asian Games in China in 1996, has decided it is his duty to revive the ski school. It is partly an attempt to rebuild the local economy, but also a form of resistance to the intimidation of the Taliban.
He wants to bring fun back to Swat.
"The children of the area are very happy that we are skiing again. It's a good message that peace has been restored or is being restored in Malam Jabba," he says.
"No-one can say our area is totally safe and secure from attack, we have to live with it. But we all have to do what we can to promote peace, and everyone must try to contribute."
Matee Ullah Khan's abundant enthusiasm for skiing seems to be infectious, and many children are planning to take part in a ski gala, Skiing for Peace, this week, on their homemade skis.
Continue reading the main story

An enterprising local has rigged up an improvised version with a recycled motor, but it is all very basic, and a world away from the fashionable slopes of Chamonix or Klosters.
"It's the aim of my life to develop skiing in Swat, we have a great opportunity here. Many of my pupils are showing promise, I'm very proud of them. It's my hope to get one of them into the Olympics to represent Pakistan, and one day perhaps even win a medal."  By Rebecca Kesby, BBC World Service.

The above article covers skiing in Pakistan, but what about the other countries of South Asia. 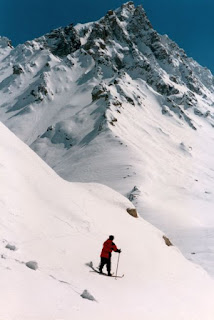 On Friday's, we would drive up to the Salang Pass with friends, and ski down the side of the road. See article on skiing in afghanistan.


Right and below: Skiing in January 1996 in the Hindu Kush, Afghanistan. Photo: Bob McKerrow 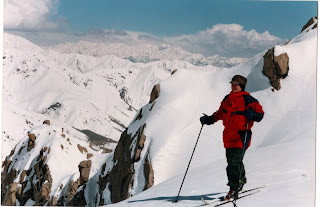 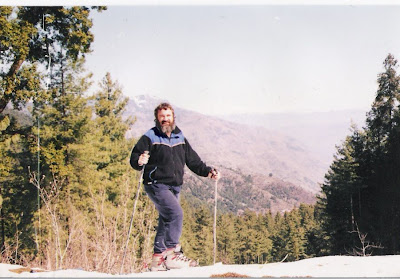 Hello to all, how is all, I think every one is getting more from this web site,
and your views are nice for new users.

At this time it appears like Expression Engine is
the best blogging platform out there right now. (from what I've read) Is that what you are using on your blog?

First off I want to say wonderful blog! I had a quick question in which I'd like to ask if you don't mind.

I was curious to know how you center yourself and clear your mind prior to writing.
I've had trouble clearing my thoughts in getting my ideas out. I truly do take pleasure in writing however it just seems like the first 10 to 15 minutes tend to be lost just trying to figure out how to begin. Any suggestions or tips? Kudos!

Nice blog right here! Additionally your web site loads up very fast!
What host are you the use of? Can I am getting your affiliate link for your host?
I wish my web site loaded up as fast as yours lol

my web-site: work for stay at home moms

I read this piece of writing fully regarding the resemblance of hottest and previous technologies, it's awesome article.

Every weekend i used to pay a visit this website, because i want enjoyment, as this this web site conations in fact pleasant funny data too.

I was suggested this website by my cousin. I am not sure whether this post is written by him as no one else know such detailed about my difficulty.
You're wonderful! Thanks!

Hi there, everything is going well here and ofcourse every one is sharing data, that's in fact fine, keep up writing.

If you want to grow your knowledge only keep visiting this website and be updated with the
most up-to-date news posted here.

Here is my page :: daytime tv

You actually make it appear so easy together with your presentation but I find
this topic to be really one thing which I think I would never understand.
It seems too complicated and extremely wide for me.
I'm having a look forward in your subsequent post, I will try to get the cling of it!

Feel free to surf to my web blog :: “eat your fruits and vegetables”. now

Excellent blog here! Also your web site loads up fast! What host are you
using? Can I get your affiliate link to your host? I wish my website loaded up as quickly as
yours lol

Nice post. I used to be checking continuously this weblog and I am inspired!

Extremely helpful information particularly the ultimate section :) I maintain such
info a lot. I used to be looking for this certain
info for a long time. Thanks and best of luck.

magnificent points altogether, you simply won a new
reader. What may you recommend about your publish that you made some days ago?
Any sure?

Here is my web-site http://army.ca/wiki/index.php?title=User:MerleRidd

Terrific post however , I was wondering if you could write
a litte more on this topic? I'd be very thankful if you could elaborate a little bit more. Thanks!

Great article, just what I wanted to find.

Feel free to surf to my web-site: gift ideas for men

If you would like to take a good deal from this post then you have to apply these techniques to your won webpage.

You could definitely see your enthusiasm within the work you write.
The arena hopes for even more passionate writers like you
who are not afraid to mention how they believe.
Always follow your heart.

Amazing blog! Do you have any tips for aspiring writers?
I'm hoping to start my own website soon but I'm a little lost on everything.
Would you advise starting with a free platform like Wordpress
or go for a paid option? There are so many choices out there that I'm completely overwhelmed .. Any tips? Thank you!

Take a look at my blog; www.pg-wiki.de

Do not worry if you've got missed a dose. It can be common for individuals to forget their usage times and lose doses. When you accidentally intake a lot more treatments than was prescribed, then contact a serious event healthcare center immediately. Ask your pharmacist concerning properly disposing off medication that is certainly past expiry date.