George Lowe is dead. I feel a sense of grief and loss for it is the parting of a team of our greatest NZ mountain sons.. A short time ago I posted on facebook thus:

The super-great New Zealand mountaineer George Lowe died yesterday. Of 1953 Everest fame, George started his adventures in the Ruahines and then made his mark in the Southern Alps with Sir Edmund Hillary, Ed Cotter and Earl Riddiford. His last years were hard ones for friends and family as he had Alzheimers so his passing over the 'divide' is a relief. Ed Cotter visited George and his wife regularly in England and was a faithful rope partner til the end. A photo of George Lowe right, and Ed Cotter last year in the UK.

For a young New Zealand boy brought up on the heroics of Hillary, Lowe, Cotter and Riddiford on the first ascent of the Maximilian ridge of Mount Elie de Beaumont, and later Lowe and Hillary on a successful first ascent of Mount Everest, it is the passing of a 'great.'

For years my family has been close to George Lowe's climbing partner, Ed Cotter. Ed has been George's very close friend and visited England regularly to support George and his wife, as George deteriorated with Alzheimer disease.   Here is a photo of George (right)  and Ed Cotter. 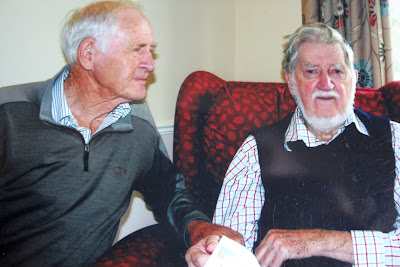 Here is what his local newspaper the 'Hawkes Bay Today' recorded.


School principal Robert Sturch, who last night conceded he'd never heard of George Lowe until he arrived at the school in 2002 and was introduced to the former head prefect returning as guest speaker for its centennial, said the death was marked with a minute's silence at an assembly yesterday.

But "without a doubt" there would be something to mark the life of a man for whom he said there could be few better examples of "courage and commitment".

As the school of 771 boys was told of the death there was a mixture of acclaim and disbelief - the latter mainly from younger students previously unaware of the school's links to the 1953 conquering of Mt Everest, and the role of a former pupil often referred to as the "forgotten" man of the expedition.

He was the man to whom Sir Edmund Hillary about 11.30am on May 29, 1953, announced the conquering of Mt Everest with one of the most famous lines of the 20th century: "Well, we knocked the bastard off."


On behalf of the school, Mr Sturch has passed on condolences to bereaved family members in England where Mr Lowe died in a nursing home, aged 89.

He was born Wallace George Lowe in Hastings on January 15, 1924, one of eight children. His parents were Archie and Teenie Lowe, who operated an orchard off Maraekakaho Rd, Stortford Lodge. Lowe St is named after Archie Lowe, who was a Hastings Borough Council member from 1938-41.

George went to Hastings West School, now known as Raureka, and from 1938-43 was at the then-Hastings High School, where he played lock in the first XV rugby team. An arm injury at the age of nine proved little impediment as he grew up, delivering papers and milk on his bike, and he developed an interest in tramping.

After two years at Wellington Teachers' Training College he returned to Hastings where he taught at Parkvale School, from where he would leave for the Everest expedition - returning to a parade in Heretaunga St.
Moving to England, he made a point of returning to Hawke's Bay for some time at least once a year, often visiting his old school, and on one visit, in 2004, was accorded Freedom of the City in an investiture by Mayor Lawrence Yule.

Until his death he was the last surviving climber from the team that helped establish the final camp 300m below the Everest summit the day before Sir Edmund Hillary and Tenzing Norgay reached the peak.

Sir Ed's son, Peter, yesterday remembered Mr Lowe as a talented man who shared his father's passions for climbing and helping others.

Mr Lowe had contributed to the mountaineering community in New Zealand and overseas, including the education of people living near Mt Everest in the Himalayas. Those people were "were real priorities for George", he told Radio New Zealand.

"That's perhaps one of the really significant thing about today losing George. It just is another stamp of how important this New Zealand connection with Mt Everest is," he said.

He referred to the Mt Everest climbs involving his father and Mr Lowe and their later work building the schools and hospitals. "It's been a long New Zealand involvement with the highest mountain on the planet."
Posted by Bob McKerrow - Wayfarer at 00:09

Kia Ora Bob
A Mighty Totara has Fallen...
At Howlett's hut in the Ruahine are still written words from a young George. He quickly outgrew the Ruahine, but his presence is still there. Thank you for the epitaph to a Kiwi who should be honoured, if only for his humbleness.

Thanks Robb.
George is dead.
Nga mate, nga aitua o koutou ara o matou - The dead the afflicted both yours and ours
Ka tangihia e tatou i tenei wa - We lament for them at this time
Haere, haere, haere - Farewell, farewell, farewell.

Hurrah, that's what I was exploring for, what a material! present here at this blog, thanks admin of this site.