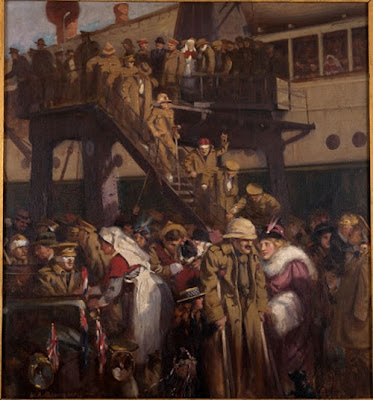 The Homecoming from Gallipoli by Walter Armiger Bowring, 1916.

On the 15 July 1915 the SS Willochra arrived in Wellington loaded with the first wave of New Zealand wounded from the Gallipoli Peninsula. Bowring's The Homecoming from Gallipoli illustrates the poignant loss-of-innocence moment when civilian New Zealanders first confronted the grim reality of wounds, amputations, psychological trauma and death. The painting is dominated by a seemingly unending line of khaki and bandages zig-zagging down from the ship into the jostling throng of anxious civilians. The flag and coloured streamers all hang limply, suggesting that the families waiting at the dock had expected a victorious celebration but were met instead by parade of exhausted men

ANZAC day is a very poignant day for New Zealanders and Australians as many of us lost relatives in the First and Second World Wars.

I used to sit on my Grandfather's (Thomas Farrow McNatty) knee as a child and play with a medallion on his watch . After he died my brother was given the watch, medallion and chain and it had the year 1900 engraved on it and that his platoon had won a shooting competition in my home town Dunedin. When the 1st World War broke out my Grandfather was too old to go, but five of his brothers went to the war. He told me how his mother (Hannah) and his father (John) hearts were broken when they received news that their son Henry John McNatty had  died on 06 August 1915 at Chunuk Bair, Gallipoli, Turkey  and buried at Chunuk Bair.  Over two year later John and Hannah received word that another son, Walter Ernest McNatty died of wounds, in France, on 03 October 1917. The three other brothers - 4/2202 Sapper Charles Burton McNatty, 65117 Private Frank Kingsland McNatty, 59033 Private Robert McNatty - all survived and I recall vividly meeting two of them in the first 15 years of my life. Tomorrow, 25 April 2012, ANZAC day, would also like to honour Great Uncle Bert Hodgson, my Grandmother's brother, who left his Southland farm in about 1898-99 to join the Third New Zealand Rough Rider Contingent, as a member of the No. 5 Company, that went to South Africa to join the British Forces against the Boers.

Then to my Father James William Godrey McKerrow who fought with New Zealand's 23rd Battalion in Egypt and later Italy during the Second World War. My Dad had a horrible war, but like many of his generation, seldom talked about it. But during all night long talks I had with him a few years before he died , he opened up and told me of the horrors he witnessed. 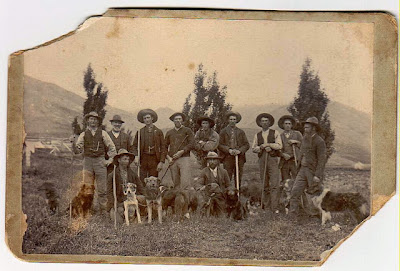 Here is a photo of Uncle Bert (second from the left, standing) with the beard, in older age, out hunting with a group of younger men near Waikawa, Southland, New Zealand.

The making of ANZAC day

Anzac Day, as we know it, began to take shape almost as soon as news reached New Zealand of the landing of soldiers on the Gallipoli Peninsula on 25 April, 1915. Within a few years core elements of the day were set and the Anzac story and sacredness of the commemoration enshrined. 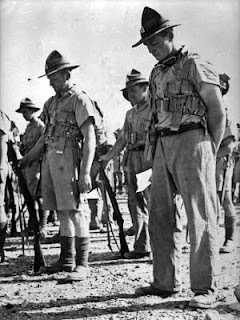 New Zealand soldiers bow their heads in prayer at an Anzac Day service at El Saff in Egypt, 25 April 1940.

The first public recognition of the landings at Gallipoli occurred on 30 April 1915, after news of the dramatic event had reached New Zealand. A half-day holiday was declared for government offices, flags were flown, and patriotic meetings were held. People eagerly read descriptions of the landings and casualty lists – even if the latter made for grim news. Newspapers gushed about the heroism of the New Zealand soldiers. From the outset, public perceptions of the landings evoked national pride. The eventual failure of the Gallipoli operation enhanced its sanctity for many; there may have been no military victory, but there was victory of the spirit as New Zealand soldiers showed courage in the face of adversity and sacrifice. 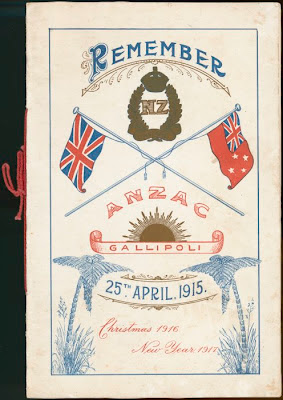 Day Gazette notice New Zealanders soon demanded some form of remembrance on the anniversary of the Gallipoli landings. This became both a means of rallying support for the war effort and a public expression of grief – for no bodies were brought home. On 5 April 1916 a half-day holiday for 25 April was gazetted, and church services and recruiting meetings were proposed. Returned servicemen wanted something else: 'the boys don't want to be split up among twenty or thirty different churches on Anzac Day, and it is certain they don't want to go to a meeting to hear people who haven't been there [to war] spout and pass resolutions'. Instead, returned servicemen preferred a public service conducted by an army chaplain. Returned servicemen soon claimed ownership of the day's ceremonies. These included processions of returned and serving personnel, followed by church services and public meetings at town halls. Speeches extolled national unity, imperial loyalty, remembrance of the dead and the need for young men to volunteer at a time when conscription loomed. Large crowds attended the first commemorations in 1916. There were 2000 at the service in Rotorua, and in London, there was a procession of 2000 Australian and New Zealand troops and a service at Westminster Abbey. New Zealand soldiers in Egypt commemorated the day with a service and the playing of the last post, followed by a holiday and sports games. Only a year after the landings some people saw potential profits from using the term Anzac to promote their products. On 31 August 1916, after lobbying by returned soldiers, the use of the word Anzac was prohibited for trade or business purposes.

New Zealand Returned Soldiers' (later Services') Association, in co-operation with local authorities, took a key role in the ceremony, organising processions of servicemen, church services and public meetings. The ceremony on 25 April was gradually standardised during and after the war. It became more explicitly a remembrance of the war dead and less a patriotic event once the war was over. The ceremony was conducted around a bier of wreaths and a serviceman's hat, and there was a firing party of servicemen men with their heads bowed and a chaplain who read the words from the military burial service. Three volleys were fired by the guard, and the last post was played. This was followed by a prayer, a hymn and a benediction. 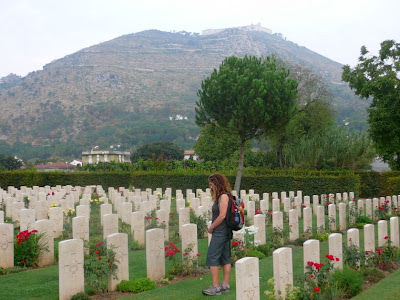 Barbara McKerrow, my sister-in-law, visits the graves of New Zealand soldiers who died at Monte Cassino during WW II. My Father fought with the 23rd New Zealand Batallion in this war. Photo: Barry McKerrow

The word Anzac is part of the culture of New Zealanders and Australians. People talk about the 'spirit of Anzac'; there are Anzac biscuits, and rugby or rugby league teams from the two countries play an Anzac Day test. The word conjures up a shared heritage of two nations, but it also has a specific meaning.

Anzac is the acronym for Australian and New Zealand Army Corps. This corps was created early in the Great War of 1914–18. In December 1914 the Australian Imperial Force and New Zealand Expeditionary Force stationed in Egypt were placed under the command of Lieutenant General William Birdwood. Initially the term Australasian Corps was suggested, but Australians and New Zealanders were reluctant to lose their separate identities completely.

No one knows who came up with the term Anzac. It is likely that Sergeant K.M. Little, a clerk at Birdwood's headquarters, thought of it for use on a rubber stamp: 'ANZAC' was convenient shorthand. Later the corps used it as their telegraph code word.

The term continued into other wars. A new Anzac corps was briefly formed during the campaign in Greece in 1941. During the Vietnam War, New Zealand and Australian infantry companies combined to form the Anzac Battalion.

A sacred holiday - Anzac Day
Anzac Day took on a new meaning in a time of peace. Most New Zealanders saw it as a time to express sorrow, not to glorify war. It became a sacred day, but one that was secular in tone and less like a mournful funeral.

A public holiday
The status of Anzac Day was not clear until the early 1920s. Peace was celebrated from 19 to 21 July 1919, but there was no official day of commemoration for the war. The government was prepared to move St George’s Day to 25 April and declare that day to be a government holiday. There was little support for this. Government holidays tended to be religious observances or patriotic occasions, and Dominion Day, the self-styled national day, possessed no emotional appeal.

Anzac Day had strong public appeal. In 1920 the government responded to Returned Services’ Association (RSA) lobbying for 25 April to be declared a holiday; the first was marked in 1921. Legislation making the day a holiday also closed hotels and banks and prohibited race meetings, but this did not meet RSA demands for the day to be ‘Sundayised’. In 1922 the government backed down, and 25 April became a full public holiday as if it were a Sunday.

The features of Anzac Day evolved during the 1920s and 1930s. Public war memorials erected in the 1920s took the place of town halls or churches in the ceremony. In the process, the ceremony itself became less overtly religious. There were occasional protests from churches, but it was RSA leaders, servicemen and local politicians who increasingly made the speeches, rather than clergymen.

Gradually the service became less like a mournful funeral. The laying of wreaths became more central to the ceremony, and there were fewer speeches and hymns. Uniformed members of the armed forces became accepted in many places as participants in the march and service.

New Zealand’s Anzac Day services began to include new features taken, appropriately, from the Anzac partner. The dawn parade, commemorating both the time of the initial landings at Gallipoli and the routine dawn stand-to in the trenches, was an Australian idea. It was widely adopted in New Zealand from 1939 (although some centres, such as Whanganui, had included dawn parades in their commemorations for several years before this). The cold and darkness breaking into sunrise added to the symbolism of the occasion.

Common themes in the speeches were nationhood, national and imperial loyalty, sacrifice and peace. During the Depression, Anzac Day speeches mentioned the ideals of unity and selflessness. As the international situation deteriorated in the 1930s, Anzac Day speeches focused on the need for defence preparations and the importance of not forgetting past lessons. The number of marchers grew as returned servicemen became more interested in commemorating their war experiences through public ritual. Anzac Day began to take on the features of an annual reunion.

My thanks to New Zealand History on Line for permission to use extracts from their site.