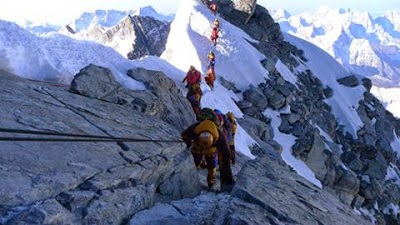 Survivors of Mount Everest's deadliest avalanche recalled scenes of panic and chaos, describing how they dug through snow with their hands and ice axes in hopes of finding their friends alive.
Just minutes before the avalanche hit on Friday, about 60 Sherpa guides had been backed up along the dangerous Khumbu Icefall - the edge of a slow-moving glacier known to calve and crack without warning. They heard the sickening boom of ice breaking above, and then the roar of it coming down around them.
As details of the tragedy trickle down the mountain, Nepal's tight-knit climbing community has been left reeling and struggling to make sense of an accident that they say could have happened to any one of them, at any time.  ''We were sweating, panting, digging for our friends,'' survivor Cheddar Sherpa said, standing beside his friend's body at the Sherpa monastery in Katmandu, Nepal's capital.
As he helped carry down the injured, he had no idea who might still be alive. ''We were terrified,'' he said.
At least 13 people were killed, and another three are still missing, though there is almost no hope of finding them alive.

See video clip on the accident.

Climbing has been halted amid a search operation to locate bodies buried under snow, but the operation was suspended Sunday afternoon (local time) due to bad weather, and it was unclear whether it would resume on Monday, Tourism Ministry official Mohan Sapkota said.
The expeditions ferrying foreigners to Everest's peak said they would continue the climbs, though they're not sure when - or how, with some guides now injured or gone.
All of the victims were from Nepal's ethnic Sherpa community, which relies heavily on the country's alpine trekking and climbing industry, with many making a living as climbing guides and others catering to foreign visitors by providing restaurants, equipment or transportation. 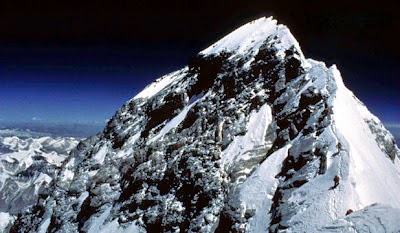 At the time of the avalanche, according to Cheddar Sherpa, dozens of Sherpa climbers were carrying tents and equipment to higher elevations in preparation for their foreign clients to ascend next month, when weather conditions are best.
They got caught in a traffic jam behind several Sherpas struggling to fix one of the aluminum ladders laid over the crevasses that cut through the Icefall.
Meanwhile, several other Sherpas, who had already passed before the avalanche hit, remain stranded above the collapsed Icefall, waiting until a new trail can be dug and new ropes fixed, said Ang Tshering of the Nepal Mountaineering Association.
It was unclear how long that would take, but Tshering said the group had tents and enough food to last for days.
Hospitals in Katmandu were treating four survivors of the avalanche for broken bones, punctured lungs and other injuries.
While there were hundreds of climbers, guides and support crews at Everest's base camp preparing to climb the 8,850-metre peak, few had been around the Khumbu Icefall on Friday, according to American climber Jon Reiter, who spoke with the Santa Rosa Press Democrat by satellite phone from the base camp.
He and an Australian had been climbing in the area when their Sherpa guide shoved them back from the avalanche, and out of harm's way.
''We were moving up to Camp 1, just after dawn, when we heard that 'crack,''' said Reiter, 49, a contractor from Kenwood, California. ''My first thought was to film it, and I reached for my camera. But the Sherpa yelled to get down. Things started happening in slow motion. Big blocks of snow and ice started coming down all around.''
It's not clear how close Reiter was to the avalanche. But in response to questions, he wrote on his blog: ''There were very few Western climbers in the area, and all of us had our climbing Sherpa by our sides and they all survived.''
The worst recorded disaster on Everest had been a fierce blizzard on May 11, 1996, that caused the deaths of eight climbers, including famed New Zealand mountaineer Rob Hall, and was later memoralised in a book, Into Thin Air, by Jon Krakauer. Six Nepalese guides were killed in an avalanche in 1970.
Hundreds of people, both foreigners and Sherpas, have died trying to reach the world's highest peak. About a quarter of them were killed in avalanches, climbing officials say.
More than 4000 climbers have reached the top of Everest since 1953, when the mountain was first conquered by Sir Edmund Hillary and Sherpa Tenzing Norgay.
Nepal this year began stationing officials and medical personnel at Everest's base camp, located at 5300 metres, to better monitor the flow of climbers and speed up rescue operations during the March-May climbing season.

Guy Cotter in Nepal to  assist families of Sherpas contracted to his company.

A few days ago it was reported that the chief executive of a New Zealand adventure tourism company is flying to Nepal to support families of its contracted Sherpas after an avalanche on Mt Everest killed the porters.
The bodies of 13 Sherpas had last night been recovered from an area between Base Camp and Camp 1. Three more Sherpas are believed to be buried under the snow and ice but couldn't be found as bad weather closed in.
Three of the Sherpas confirmed dead were contracted to Wanaka-based Adventure Consultants. General manager Suze Kelly said the company would do all it could to assist the families of the dead men.
"Our CEO, Guy Cotter, is travelling to Kathmandu at the moment," Kelly said last night. "He is going over there to offer support to the families of the Sherpas."
Friday's tragedy, which Nepalese government officials labelled the deadliest climbing disaster in the region, occurred as Sherpas were working on securing ropes ahead of several groups of foreign tourists who had paid up to $116,000 each to climb the mountain. Rescuers managed to save several Sherpas in the moments after the avalanche hit.
Kelly said the tragedy had hit her company hard, saying some of the Sherpas were known "really well" by Adventure Consultants.
"It is the worst thing that could happen to an expedition climbing team . . . and us," she said.
Kelly was Adventure Consultants' Everest Base Camp manager in expeditions in 2000, 2006, 2007 and 2008.
Last year she climbed Lhotse - the world's fourth-highest mountain and also in the Himalayas - alongside two of the Sherpas killed on Friday.
"They are such amazing men," Kelly said. "When you see them doing what they go about daily, it is just phenomenal. You will be going along at your pace and they will be flying past you about five times as fast. You are constantly amazed at how they operate up there in the very thin air."
Adventure Consultants had six New Zealand clients at Base Camp preparing to tackle Everest when the tragedy struck. The company also had several support staff at the camp.
Kelly said it would take several days before a decision was made over the planned expedition's future. At the moment, the priority was caring for the families of the dead men and assisting in the search for the four missing Sherpas.
"It might take a few days actually to work out where to go next. We don't know," Kelly said.
The deaths were a tragic reminder of the hostile environment facing anyone who tried to climb Mt Everest.
"It is no cake walk," Kelly added. "Mountaineering does have its risks, which brings a lot of rewards when you can overcome those challenges, but the risks are there."
The company knows all about Everest tragedy - co-founder Rob Hall died on the mountainside in a 1996 climbing disaster which also claimed the lives of a fellow guide and two clients.

Thanks to Fairfax NZ News and AP for permission to use excerpts from their articles.