A Red Cross Heroine from France 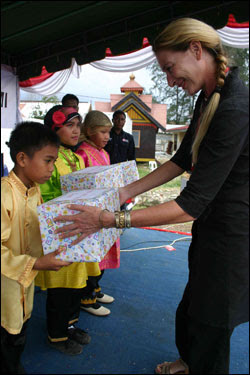 Corinne Treherne, the International Federation transitional shelter programme’s coordinatorhands a present to children's beneficiares during the closing ceremony of the programme in Banda Aceh, Indonesia.

Some of us have had the privilege to come across amazingly skilled women who can communicate and implement with communities in our humanitarian work. One French woman, Corinne Treherne, has made the greatest impression on me in the last decade. She is my modern day Joan of Arc, a sort of Angel. What an achievement! Building teams to assist her construct 20,000 houses and giving 100,000 people a home after the devastating tsunami which killed over 170,000 people in Indonesia on 24 December 2004..

Early this year, the International Federation’s landmark transitional shelter programme in Aceh came to a close, with the last of the almost 20,000 shelters being completed on remote Simeulue Island. A short time ago, my colleage Vina Agustina sat down with Corinne Treherne, the programme’s coordinator, to look back on the programme and to talk about its successes, challenges and lessons. 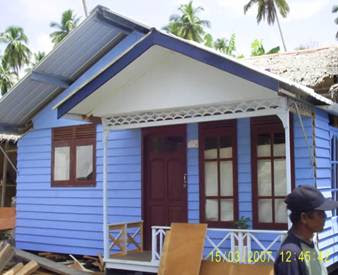 One of the 20,000 houses that Corinne supervised the construction

Question (Q): First of all, can you tell us about the background of this programme? When did it start, and what prompted it? 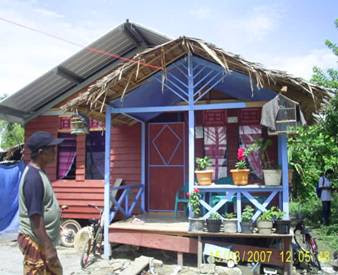 When completed, the house owners show their individuality by decorating it with their colours and designes

Answer (A): The programme began in 2005. Towards the end of 2005, about 67,000 people were still living in dilapidated tents, which needed to be replaced. At the same time, tsunami affected-people were eager to rejoin their communities, and we knew that it was going to take a significant amount of time for permanent houses to be built.

Therefore, we devised a way to improve community life while people were waiting for their new permanent homes. In November 2005, the first prototype of the transitional shelter arrived at the Banda Aceh office. The transitional shelter team then made some improvements to the design to make it more appropriate to local needs and logistics. 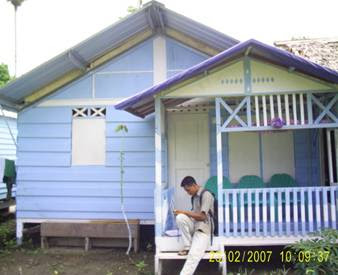 Q : There have been a lot of actors involved in this programme: the International Federation secretariat, Red Cross and Red Crescent societies and a number of non-Red Cross Red Crescent partners. How have you managed to make sure that everything is coordinated, and that the implementation has been consistent?

A : First of all, we shared the design of the shelter with all agencies involved in the tsunami operation, and with the United Nations. At first, we had weekly meetings, and then the coordination became more intensive and interactive, by phone and email, as we started to ship and build the shelters.

Q : Throughout the programme, a lot of work was done to communicate with communities about where and when the shelters would be built. Can you tell me a bit about these efforts?

A : In the beginning, we disseminated information through the organizations helping us build the shelters, so that they could deliver it to the targeted communities. We also broadcast information via local and national media. We also had a team of 24 supervisors staying in the targeted areas. Their presence eased the implementation process. 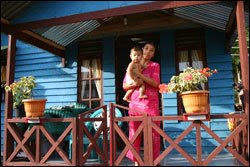 The transitional shelters have really improved community life, as they can be used for accommodation, extension of permanent houses or even for income generation if they are converted into kiosks.
Q : What kind of feedback have you had from communities?

A : Communities have responded very positively, and we have had many individual requests for the shelters. In August 2007, we conducted a satisfaction survey, funded by the Irish Red Cross, and the results indicated that about 99 per cent of people living in transitional shelters think that the programme was extremely important to rebuilding their livelihoods. It had provided them with a viable shelter alternative while permanent solutions were being prepared. 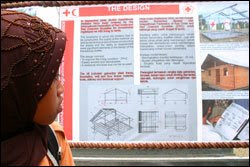 Throughout the programme, a lot of work was done to communicate with communities about where and when the shelters would be built.
Q : We often hear of the challenges facing tsunami recovery operations and I’m sure that the transitional shelter programme has been no different. What are some of the challenges that you have had to overcome? How have you addressed them?

A : Three major challenges emerged during the running of the programme. The first involved the identification of beneficiaries who have lost everything – personal papers, land deeds etc – due to the scale of the disaster. The second was related to coordination with implementing partners. Our team met this challenge by providing daily reports and analysis to partner organizations, and this proved so successful that many other agencies became interested in the programme.

The third and most complex challenge involved logistics. From the beginning, the programme has faced difficulties in obtaining building materials and delivering them to the shelter sites. The International Federation’s logistics department stepped in, mobilizing 60 M6 trucks to allow the programme to reach villages in remote areas. 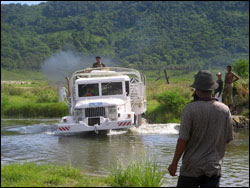 However, the communities responded positively – such as the time villagers on the remote island of Simeulue sailed out to meet an International Federation boat that could not get close to the island’s harbour, transferred the materials to their own small vessels, and brought them ashore themselves. 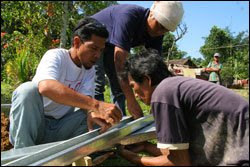 Each community involved in the programme received at least two training sessions, teaching them how to erect the frames and attach the timber.
A : We have achieved a lot. The M6 trucks were crucial in the support of our operation, but it succeeded because of the hard work and coordination of everyone involved.

Q : One of the big selling points of the programme has been the fact that the shelters are owned by beneficiaries – that they are free to use them as they wish even when they receive new permanent houses. How have people been using them?

A : The transitional shelters have really improved community life, as they can be used for accommodation, extension of permanent houses or even for income generation if they are converted into kiosks. Many of those who have been given permanent houses keep their shelter as an extension at the back or at the front or their new homes.

Corinne, you definitely must be an Angel. Great to have worked with you. Bob
Posted by Bob McKerrow - Wayfarer at 06:37

She is indeed somebody to look up too. What an amazing work she has done. Great to see the communities so involved which gives them skills and
a feeling of worth. It is heartwarming what she made happen and this interview should be on frontpages to inspire the world

Hey Bob, thanks for sharing that, look forward to seeing these shelters as we travel through Aceh and to Nias. Might make an interesting series of photos seeing how different people have adapted them to their own needs..perhaps similar to how people have modified generically designed state houses, churches or forest service huts in NZ.

We arrive in Singapore about the 11th of July and then the plan is, unless we have any deadlines to travel through Sumatra to Aceh, then round to Nias and Tello.

Would be great to meet up with you sometime, if you are travelling around.

Thanks for your email the other day, I took note about ACTED, then saw this job advertised

thought I might apply for it, what do you reckon?

Will apply to your post on preventing hunger soon when I have figured out the answer!

Again, thank you very much for such a remarkable post on the work done by unsung heroes of the Red Cross and its subsidiary helpers. There is still much faith in humanity and I see from all account on Corinne Treherne I must say that she is indeed a modern-day angel. I do believe in angels. Humanity is blessed the more as more angels' presence is felt. This blog was indeed laudable and inspiring.

Good to read you are heading our way in July. Give me a ring sometime. I will visit Nias in August so hopefully we can catch up. I noted you did you Lae Degree at Otago Uni. Duedin is my home town.

Look fowards to any thoughts you may have on poverty reduction.

Corinne Treherne is indeed an angel and I am delighted you believe in angels.
E.C. Burne-Jones wrote so beautifully: "The more materialistic science becomes, the more angels shall I paint; their wings are my protest in favor of immortality of the soul."

We are surrounded by angels and I see many out there in the course of my work.

I am sure my Mother was one.

Take care Paterika. Always I pleasure to read your prfound and crafted words.

I struggled yesterday to find the right quote from the bible about Angels.