On Friday 4 April, I posted an article and photos called Beginnings, 1968. I had a few requests to write a little more about our expedition to Peru that year.
Part one was leaving Dunedin by train…..then the next episode is arriving Wellington.

We travelled by the M.V. Rangitane from Auckland to Panama via Tahiti 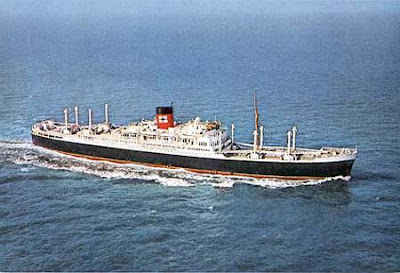 A few days later in Wellington I met the expedition members. Mac Riding, a relieving lighthouse keeper with a huge, black beard with a pipe stuck in it, Dick Cowan, who a few days earlier, had returned from the summer in Antarctica with an Italian expedition, Pete Goodwin and Allen Higgins, local Wellington mountaineers, Paul Green a tall wiry character with a reputation as a”hard man” having recently climbed the Coxcomb ridge of Aspiring, and finally, Ken McNatty, a Wellington scientist, expedition leader, and my cousin. Our common grandparents were Thomas Farrow and Pearl Annie McNatty. An eighth member, John Lawrence, an Englishman working as a psychologist in the US, would join us in Peru. In Auckland my eldest sister Marie and husband Russell, let us sleep on their floor for a day or two.

A dream was realised and shattered in Auckland within minutes of meeting Peter Snell, New Zealand’s greatest-ever athlete, when hunting for sponsorship. I met Peter Snell, my boyhood hero, who had prostituted himself working for Rothmans. I will never forget my disappointment when he gave us some cartons of Rothmans cigarettes to take to Peru.


What made our trip to Panama special was it was the final voyage of the grand old passenger ship, the Rangitane. Once the voyage started and we found that us males were outnumbered 4 to 1 by the fairer sex, we renamed it, the maiden voyage.

On the boat was two tonnes of climbing equipment and food to last us for 6 months of climbing..

An hour before the Rangitane left the port of Auckland, ticker-tape lashed us to the wharf.

The sea journey from Auckland to Papette, Tahiti was sheer fun, except for one night when a heavy storm buffeted the ship. This later went on to hit New Zealand and caused the capsize of the interisland ferry, Wahine, where over 50 people were killed.

On board there were two New Zealand mountaineering expeditions: the Alpine Club led by Dave Adcock and the Wellington Tramping and Mountaineering club one led by Ken McNatty.
A week later the Wahine docked in Papette, Tahiti for a night. New tropical smells stunned my senses as Mac Riding led me to Quinn’s Bar full of burly seafaring men and many stunning Tahitian woman.
Tahiti was so beautiful 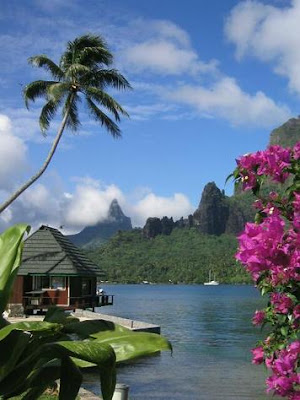 My eyes met hers. Here was a Polynesian woman more beautiful than I had ever seen. A band of white flowers decorated her dark hair and a face straight out of Gaugin’s painting, with, a sarong tied at the hip and a skimpy top covering firm and full breasts... We had a drink together and I suggested we go for a walk to get away from the noise and smoke. Walking hand in hand along the beach and she singing a Tahitian melody was paradise-like with the hills of Morea tinged by a purplish moon, the coconut palms swayed in the breeze, and a gentle sea lapped the beach. Her bum and hips were beautifully proportioned. Flashes from the musical South Pacific bombarded my mind. After 20 minutes we stopped and lay on the beach. Her white teeth reflected moonlight as she laughed and spoke to me in French.” Why go to Panama and Peru, why not stop in Tahiti ?”

After a few passionate minutes of kissing and caressing I felt her firm rounded breasts. Would I go further ? My strict Presbytarian upbringing was limiting me more than the fact my Mother told me before I left " to behave like a gentleman." 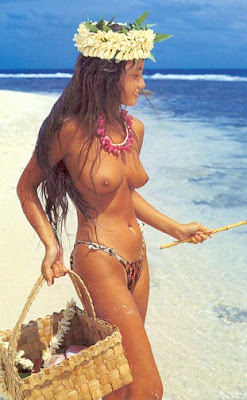 Soon I found my hand was holding a large set of testicles nestled between her thighs. I was dumbstruck for probably 30 seconds as I held fast to her balls thinking, “the women in NZ are different” and then when the realisation sunk in, I sprung to my feet like a frightened snow leopard, and sprinted down the beach in confusion and shame and didn’t stop til I had left him at least a mile astern.

As I re-entered Quinn’s bar Mac Riding had a grin from ear to ear and asked me, “ A beautiful woman, eh ? ” In a soft voice I told him she was a he. Mac said, “ I know, I’ve been here before and know, but you’ll learn, young fella. But be careful of the black dot

After one scare,.I didn’t have the courage to ask Mac, what the black dot was.

A week in Panama waiting in the grubby sea port of Balboa for an Italian ship to Peru, was sweaty and colourful. The ship with the grand name, M.V Rossini, was full of characters with an entirely Italian crew, good family like-Italian food, and many young Columbian and Peruvian women returning from studying in the United States. Dora Rios Verillos was strikingly beautiful I met aboard. Sea, youth, passion on the oceans are an explosive mixture for romance. I had just turned 20 a few days earlier. I started to promenade with Dora on the deck in the moonlight. Dark hair fell over her shoulders and, with beautiful brown eyes and an alluring olive skin, I think I fell in love for the very first time.
Balboa Port 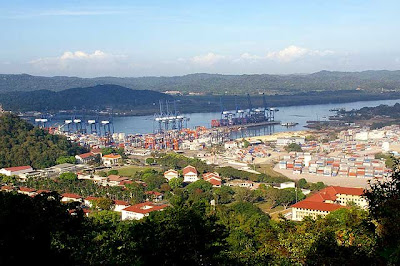 Also aboard were a group of German climbers making up the Oberfrankische Andean Expedition. They had a huge supply of German beer kegs and kept us well supplied and we had great evenings listening to their guttural songs of the mountains. Their leader was Erwin Hofman who was on an unsuccessful German expedition in 1964 on the one of the faces of Nanga Parbat.

The journey passed quickly with brief stops at Bueno Ventura, Columbia and Quayaquil in Equador,


Arrived at the Port of Callao on the MV. Rossini. Then into Lima. We had a a few days organising the next stage of our journey and Dora took me out to see Lima. I didn't want to leave the beautiful, intelligent and articulate Dora. But the mountains were calling gently.

By bus Lima to Arequipa, travelling much along the coastline. Then to Juliaco close to Lake Titicaca and the border with Boliva.

Then by train to Cuzco, over the highest train pass in the world. Then we saw the Cordillera Vilcabamba in front of us. This would be our home for 4 months.

Then we followed the mighty Urubamba River past Macchi Pichu then down to Santa Ana and Santa Maria. Stayed with Pepe Pancorbo at his Hacienda at Huancayo where he grew coffee and other crops.
\Utrabamba River below Macchi Pichu


From here we had to cross the river and then head up the Vilcabamba valley system but we had some fringe Amazonian jungle to go through for the first few nights. I was afraid the first few nights as we saw snakes and many creepy crawlies and I couldn't wait to get up into the mountains.Part 3 coming up soon. Bob 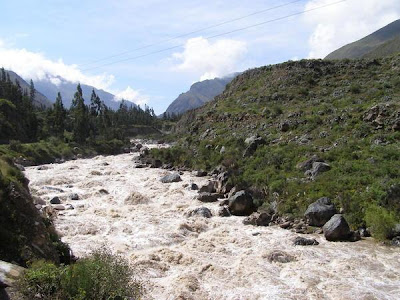 Kia ora e Bob,
I just about spit up my fine Canadian whiskey as I took a sip and read of you grabbing a handful of balls! Up till then she -he- sounded pretty stunning. Young Bob on the beach with a Tahitian beauty. Great story. I love your post. I think there is a book in your life story as well Bob. I have felt very mired, and thus sorry for myself, this week as my mundane work crap has gotten on top of me, for no reason other than it is a job. You have uplifted me my friend! There are still possibilities. Kia ora!
Noho ora mai ra,
Robb

I think the story redefines the meaning of a handful. Looking back 40 years I think it is important to tell it how it was. I have had a similar week of the hum drum grind of reports, emails and meetings. Next week I am off to the remote island of Nias where we are building a lot of houses, providing water sanitation and health services for people affected by the Tsunami and a later earthquake. Have a relaxing weekend.

Kia ora Bob,
Forgot to comment on your last post how amazed I was to read of Peter Snell hawking smokes! I commented on that to a Kiwi friend around last evening of age to remember that as well. Have a great day.
Ka kite ano,
Robb

Thanks Robb. Yes, it was certainly strange that Peter Snell went to Rothmans and now he is a leading specialist on fitness and health in the USA. Like snowflakes on the desert's dusty face, we land and change as time ticks by.

How great to read about your adventures and "romances" It was probably not that beauty on the photo. You should write a book about all your experiences.

These articles are fantastic; the information you show us is interesting for everybody and is really good written. It’s just great!! Do you want to know something more? Read it...: Great investment opportunity in Costa Rica

Hello all, thanx a lot for this article .. This is exactly what I was looking for.

This experience sounded to be extremely nice. I would like to make something similar later.

So where'd the pic of the cutie come from? Great story - reminds me of a good friend running from the beach in Thailand having gone equally as far and been "surprised at the junction"! Seriously, how do you fund your travels and expeditions? Can humanitarian work really bankroll Kilimanjaro?

I've heard that Peru is a beautiful country to visit, all their culture and the cities and the mountains I'd like to go

Hi Bob - Great to read about your adventures and great work since we ran together over the Otago hills and chased skirts at student parties in Dunedin. You've got a great future ahead of you. Un abrazo... Jim Williamson

We were soulmates for a short time in our youth and then the ocean currents took us in different directions. I have heard you live in Spain. It is such a joy to reconnect after 45 years. I think the last contact I had with you was when you wrote to me in Antarctica.

Do you remeber you and I at some ungodly hour after a party, going to St.Kilda beach and comp[eting against each other in something between a pentahlon and a decathlon ? We were sprinting, jumping, throwing rocks and having so much fun.

I have been trying to tract you down for years so it is wonderful we have connected after 40 odd years. I would enjoy catching up on what you have been up to. My email address is: bob.mckerrow@gmail.com

I've heard of Tahiti, it's a peaceful place but some people said it was dangerous because the heavy storm.
OH MY GOSH!!! SHE was a MEN hahaha hoe embarrassing

Well it looks like most of you want my zucchini! I'll gladly pass some on. Just remember, one zucchini is good,

I've heard about Tahiti a lot of times, and I have to say this is the best opportunity I see why people is always talking about this place... There are a fabulous paradise and pretty girls, I mean, what else you can ask for?

I like when you can see fantastic definition in the stomache. It truly shows dedication.

hey guys nice posts.. regards, Really very nice post and good work i love your work and its surprisingly helped me in my research. Thanks for letting me know all of these.

Have a look at my page: having trouble getting pregnant