Back in the bush, back in New Zealand 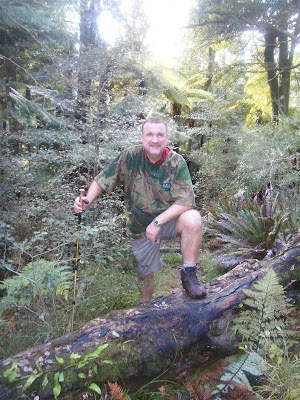 Back in the bush again. Kahanui stream in the Urewera. Photo: Tania McKerrow.

Misty mountains, sunlit solitudes, beaches curving to infinity, meandering rivers, towering podocarp forests, Maori on horses and living in isolated communities, a small gas station at the entrance to the valley where the owner sells fuel, repairs cars, sells food, cooks fish and chips and repairs shoes, seemingly at the same time. The red-tipped dawns, the frosty mornings, singing streams, river crossings and scrambling up hills are just some of the meories I am taking away from the Waiotahi valley, river and beach where I have been exploring for the last six days. What made it so warm and was having my daughter and seven week old daughter Aliyah with me most of the time. 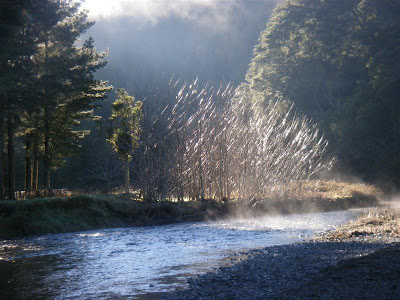 Just over 8 months ago I had total knee replacements in both legs and since then I have been building up to walking 7 km and later 10 km a day. My trip in the Urewera region was an opportunity to see if my new knees would be able to take me up hills, along bush tracks and cross rivers again. I should have never doubted Ed Newman's skills. They carried me where ever I wished to go.

The Waiotahi valley is a remote Maori region inhabited by Tuhoe and Whakatoea, On Saturday afternoon when I was cycling from the road end down to where I am staying I saw at least ten children walking between farms. All were Maori. Two of guys who work at the centre, Barlow, Whakatoea and Richie, Tuhoe, run the farm and are storehouses of Maoritanga. Their main marae is at the entrance to the Waiotaha valley.

Tania told me how she stopped at a gas station near Opotiki a week ago and watched 10 Maori teenagers ride up on horses. Horse riding is in the blood here and most oi the hunting is done from horses as the dogs flush the pigs and deer from the ridges down in to the vallies where they are shot.
On Sunday I watched Ritchie and his relatives catching a runaway horse. Horses are their main form of transportation in the eastern foothills of the Urerewa.

During my six days in the hills and forests we went down tro Waiotahi Beach and neighbouring beaches and bays. 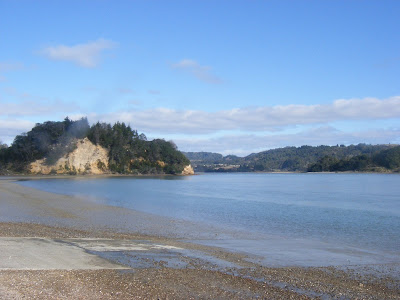 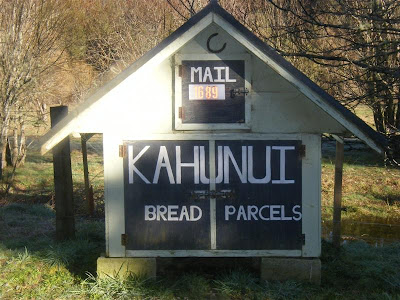 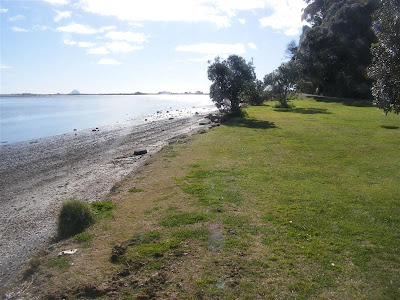 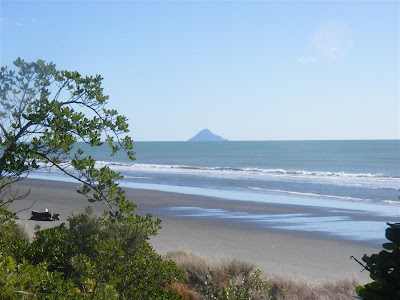 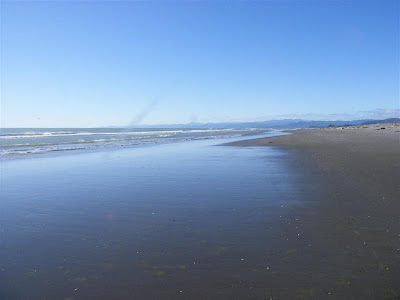 That broad arc of the Bay of Plenty. Photo: Bob McKerrow 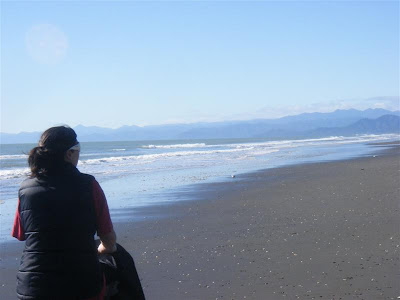 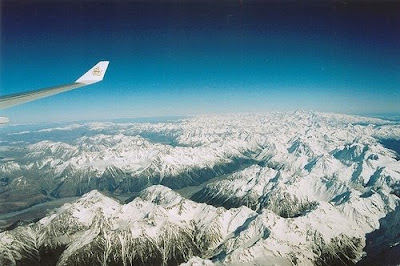 It is right in front of you, raw elemental landscapes. Welcome home.

I am leaving today for Christchurch via Whakatane and Auckland. We drove down the Waiotahi valley to the sea shore then past Ohiwa harbour, Ohope Beach, Ohope and to Whakatane for breakfast. Scrambled eggs and ham in a croissant. That coastline is superb. Flew from Whakatane, saw White Island, near Tauranga and saw Waiheke Island as we prepared for a landing in Auckland. “This is my land and I am firmly rooted in it,” wrote Albert Wendt. Today as we flew down the North Island, I felt I owned this country. Sprawling Auckland, Port Waikato and the Waikato river, Ruapehu, Tongariro and Ngarahoe were plastered white and stood out proudly. Over a teal coloured Taranaki Bight, and then beneath Mount Taranaki.

All the ranges and ridges of the lower north island were covered with fresh snow. the Tararua. Ruahine, Orongaronga. The islands of Kapiti and Mana were visible.

Then it was home across the Cook Strait to Malborough and Canterbury. The Southern Alps were gleaming white. 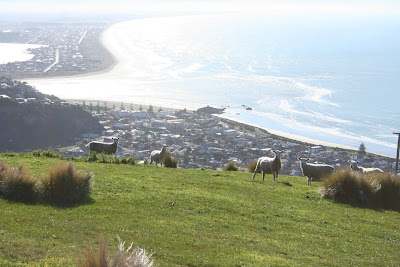 From Godley Head looking across to Christchurch. Photo: Bob McKerrow

As soon as I unpacked my bags, my daughter Ruia took me to the hills and we walked down tg Godley Head.
Posted by Bob McKerrow - Wayfarer at 17:44

Welcome home, Bob. Glad you've had some great weather to enjoy getting out on the land. That Godley Head walk's lovely; when I visit Christchurch it's high on the list of things to do.

What a joy to get out in those forest again. You are right, the Godley head walk is a cracker.

Kia ora Bob,
Glad to see those knees carrying you back into the beautiful New Zealand mountains and bush. Also glad you got to fly over the Ruahine and see the snow covered peaks. In less than 48 hrs. I shall be hoisting my swag and getting amongst them for 5 days. Enjoy your time with family and Aotearoa my friend.
Cheers,
Robb

So good to be back. Just leaving for lunch with Robin Judkins and a few of his mates SO IT WILL BE GOOD TO TALK SOUTH ISLAND MOUNTAINS AGAIN.

Yes, I loved seeing the Ruahine and Tararua yesterday. Robb, enjoy your trip into the Ruahine. My thoughts will be with you.

Good on ya Bob, great to see you out there again. Go hard aye

Yeh Jamie, Its the plugging away that wins the day. Out at 7 am this morning walking the dog and got a splendid view of the alps when the sun rose. A wonderful world mate. Bob

Your style is so unique in comparison to other folks I've read stuff from. Thanks for posting when you have the opportunity, Guess I'll just bookmark this page.