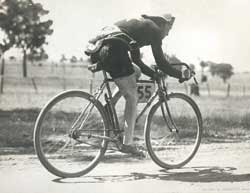 I am leaving in a hour or two for a one month holiday In New Zealand I have children and grand children to visit, remote places to visit, and of course my growing love, cycling. With the Tour de France on it is time to be inspired by the world's greatest sporting event. I plan to do quite a lot of cycling and feel so inspired by the feats of the legendary Harry watson. It was you Jamie who introduced me to Harry Watson. Thanks !

I suppose it was Dad that first got me interested in cycling. In our cellar was his old black roadster bicycle with double forks. My Dad, Jim McKerrow, used to tell me the story of he and a friend cycling from Christchurch to Dunedin on gravel roads somewhere around 1928, when Harry Watson was competing in 'le Tour.'

When New Zealander Haydon Roulston got third on the stage last night in the Tour de France, I thought of that brave cyclist Kiwi Harry Watson who finished 26 th overall in 1928.

His bicycle had become a crutch. Leaning against it, he gazed up the twisty mountain road that lead to Col du Galiber (2556 metres). Behind him, 3500 kilometres of France had passed beneath his tyres. Ahead, almost 2000 kilometres remained. It was too far. Most competitors had already pulled out, leaving him to trail the Tour's field of survivors. Yet despite saddle sores, diarrhoea and chronic fatigue, he struggled on.

The 1928 Tour de France was almost a perfect 5377-kilometre outline
of France. In 1928, New Zealand's professional road cycling champion, Harry Watson, joined the first English speaking team to take part in the Tour de France. He was only 24 years old, and despite his team being unfairly handicapped by bizarre race rules, Watson managed to finish 28th in general classification. 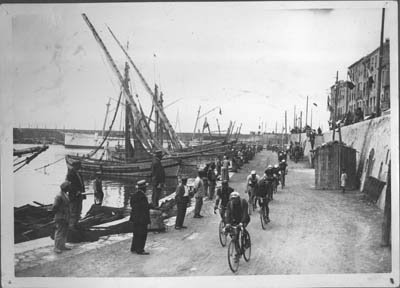 The 1928 Tour de France was almost a perfect 5377-kilometre outline of France. Here the lead riders pass through the city of Sete on the
Mediterranean.

Armed with the experience gained in France, Harry returned home and proceeded to set race records that lasted long after he retired. He pioneered the use of derailleurs and tubular tyres in New Zealand road racing and between 1929 and 1935 won seven national road championships in succession, a record that has not been achieved by any other rider since.

How have other New Zealanders fared in the Tour de France ?


The only stage win by a New Zealander in the Tour de France was a team time trial. Although Chris Jenner didn't finish with the core of his Credit Agricole team, he is still credited as sharing the stage win - he got to stand on the podium that day.

Few New Zealand riders have completed the world's greatest cycle race. The first was Harry Watson, who in 1928 was part of a four-main 'down-under' team. The team was supposed to have ten riders, but their six European teamates failed to show - a major handicap given that 15 of the stages were over 380 kms long. Watson still managed

Dean has gained a reputation as one of the best lead-out men in the world, helping set up his team's fastest rider as they reach speeds of up to 80 km/hr before crossing the finishing line in the frantic and dangerous sprint stages. In 2009 he is a member of the Garmin-Slipstream team working for the young American sprinter Tyler Farrar. If he completes the Tour he will be the first New Zealand rider to achieve this five times. Another first in 2009 is to have two riders in the Tour peleton, the other being Haydon Roulston on the Cervelo Test Team.

Chris Jenner retired from professional racing in 2004. Apart from his Tour stage, he won the overall Le Télégramme in 2002, two stages and the overall of the Tour of Wellington in 2001, as well as stages in the Tour de l'Ain and Tour de l'Avenir in 1999.

So let's raise a glass to Harry Watson, that great New zea;and cyclist and let's hop Haydon Roulston can win a stage on the current Tour de France. 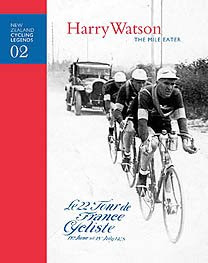 And if you want to read more about Harry I can recommend New Zealand Cycling Legends 2: Harry Watson - The Mile Eater by Jonathan Kennett. For those of you who are interested, who were the other great 'pre 2nd World war cyclists ?

Long before Le Mond or Armstrong defied death, Maori rider Bill Pratney was left for dead after an horrendous racing accident in 1930. Two road races using the same Auckland course in opposite directions, one amateur and one cash, collided on a corner. One rider died and Pratney appeared lifeless. Fortunately someone noticed his hand twitch and he was carted off to hospital where he remained for three weeks. He came back to win a championship title in every distance up to 120 miles, and he just kept on going. "Bye Bye Bill" was his nickname, as he had a fearsome finishing sprint. After competing in the Australian Masters Games in 1995, the 87 year old Pratney rode 900 laps of the Brisbane velodrome to raise money for bibles. Unstoppable.

‘Nat' Hall was one of New Zealand's greatest penny farthing cyclists. By the end of summer 1890, he held five national ‘path racing' records ranging from ¼ to 20 miles and all the national championship titles. In July 1890, The Canterbury Times reported: "Well does he deserve all that he has won for in every race that I have seen him ride he has ridden as a gentleman should and never have I seen him guilty of any of the ‘tricks of the path' ... to the disadvantage of a rival competitor."

In 1896, at 18 years of age, George Sutherland won three national track titles in one afternoon. The next year he won them all, and was still winning national titles ten years later. After several years thrashing both the local competition and visiting international stars, he crossed the Tasman and took fastest time in the Sydney 1000. He also raced at the 1900 World Championships in Paris and at the 1900 Olympic Games as part of a British team in a demonstration event.


One of the famous Arnst sporting family, Jack was a champion on both road and track between 1903 and 1910. He gained fastest time in the 1903 Timaru to Christchurch and the Warnnambool to Melbourne. He also gained fastest time in the 1909 Timaru to Christchurch, but was later disqualified for accepting pace from his brother, Arnst, who had earlier pulled out of the race. Many racers were disqualified for minor infringements of the rules that year. He went on to set long distance cycling records, including the Christchurch to Dunedin in 12 hours and 21 minutes.

O'Shea was the champion of champions. He reigned supreme on the road from 1911 to 1923, winning both New Zealand and Australian championships. He was also a master of the track, dominating local riders to such and extent that overseas champions were imported to provide him with serious competition. His popularity lasted long after he had retired from cycling, and even in the 1960s newspapers were claiming that he was New Zealand's greatest cyclist. He is the subject of a biography written by the Kennett Brothers in 2005 called Phil O'Shea - wizard on wheels.


Hubert Turtill's cycling career started at the age of 13. By 1934, he had won every New Zealand cash track title and had moved on to race in Australia. He won a number of Australasian Championship titles before heading to Europe. His racing dreams on the Continent were foiled by the outbreak of the Second World War. When he retireed from racing, Turtill settled in Christchurch as a bike builder.

Kia ora Bob,
Hope your journey back goes well and delivers you safely into the bosom of love and family - and the chilling embrace of NZ winter!
I see Lance is fading a bit, still a pretty remarkable feat for a man of his age to be near the front.
The only old time bike story I recall is an old time racer recanting how on the tour in the old days, with the massive support of today, chafing was a constant problem, as was food. Some riders solved both by putting a large raw steak in the crotch to cushion and let the raw meat keep the nether regions well oiled. It also provivded a well marinated dinner after the ride was over!
Cheers Bob,
Robb

Thanks for your kind wishes. The trails have been happy so far. Thanks. Bob

Thanks for the tips about the steak. I will be watching Lance and Alberto battle it out tonight.

It is a tough race. Have had two brilliant days in Auckland and Tauranga so far. Cheers

Hi Bob. I had the privilege of knowing Wiremu Paratene and his son Winkie. Bill is an inspiration to us all. Late in life he was coaching some young cyclists. They scoffed at his age and his old bike, as if he was unqualified to teach them anything. He said nothing, but quietly began training early in the morning before work (160km before breakfast). When the next race came up, he quietly won it, put away his bike, and asked the young guns if they wanted to reconsider him as a coach.

That is amazing you knew Wiremu Paratene and his son Winkie. I really enjoyed the story you wrote. Now there is someone you could write a book on. Harry Watson's achievements were also memorable and that whole bunch of NZ cyclists are inspirational to many.

Thank you my friend for your interest in Harry watson. I don't speak Korean but I recognise the language.

I am pleased you visited my blog.