Just got back from a field trip in Aceh, and later, From survivor to volunteer. 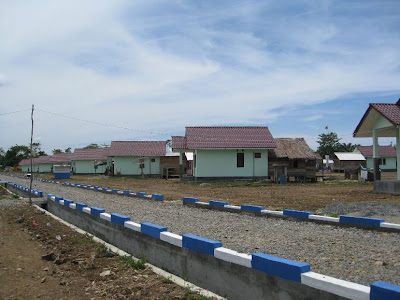 The village of Mate Ie, in Aceh Jaya district of Aceh province. We visited this village to monitor the integrated community development approach of the Canadian Red Cross. Note the transitional shelter attached to the rear of the house. The villagers lived in the transitional shelters for 3 years while their permanent house was being built. Photo: Bob McKerrow
It's been an amazing journey south of Banda Aceh to inspect a number of the 40,000 houses built by the Red Cross in Aceh after the tragic Tsunami operation of late 2004. We visited many of the 4000 houses built by the Canadian Red Cross along 75 km of coastline between Lamno, to south of Calang.

I travelled with Nina Nobel and Menaka Tennekon, from our Tsunami office in Kuala Lumpur, and Ebrahim Faghihi who runs our Tsunami recovery operation in Aceh. 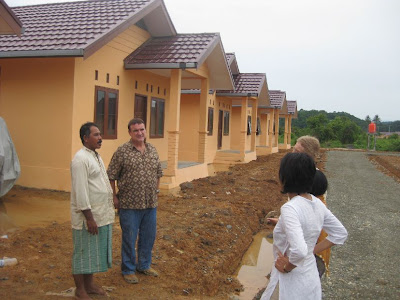 Above, Iskander, the village chief (left) at Lho Kruet talking to me in front of his new house and new village. Meneka looks on. She is our legal advisor for the tsunami. Here the Canadian Red Cross have built 3480 houses, with each house having a clean water supply and state of the art toilets. In addition to livelihood, risk reduction, gender. Photo: Galal 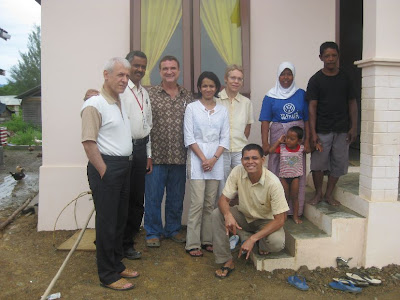 I feel a great sense of pride when I monitor the work done by our various member Red Cross and Red Crescent societies in Aceh and Nias. It is a truly integrated community development programme with permanent houses, transitional shelters placed at the back for extra space, quality water supply, toilets, community centres, schools, clinics, livelihoods and power supply. We have built back better and beneficiary satisfaction is very high. The Indonesian Red Cross have trained villagers in risk reduction and first aid, so with earthquake resistant houses that can withstand floods, this is part of a wider risk reduction programme.

We also had a look at the municipal water supply in Calang built by the American Red Cross and inaugurated last month. This is another high quality programme bringing clean water and sanitation to 6000 people. 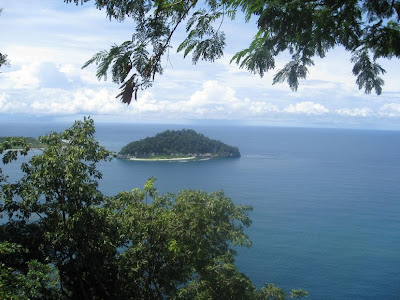 I have travelled this coast line over 15 times and never tire of the beauty. Photo: Bob McKerrow

Each visit I make, I find some outstanding red cross worker. On this trip, Abdel Gadir Galal impressed me beyond expectations. Born in the Sudan, Galal has a strong community development background and has worked in the Tsunami operation since the beginning. He has supervised the construction of 4000 Canadian Red Cross houses, and the other integrated components of water and sanitation, community centres, roads, drainage, livelihoods and community activities. As we walked about the villages everyone greets Galal with a broad smile. He replies in fluent Bahasa. It is our delegates like Galal who live in these remote corners of Indonesia, and their Indonesian Red Cross counterparts, who are the unsung heroes of this massive operation. I salute you Galal !

Now its back to reality. A heap of mud splattered clothing in my suit case, a report to write, consultants and staff to meet and paper piled high in my in-tray and 200 emails wanting an answer. This is the price of travelling and talking to the recepients of our work. 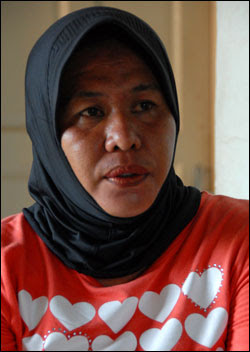 
Banda Aceh: From survivor to volunteer

When the tsunami came, Cut Resmi was planting flowers in the yard of her home in Banda Aceh. The waves swept away one of her two children and destroyed her house, leaving Cut, her husband and their surviving son homeless. After the disaster, Cut says she was devastated and felt nearly hopeless.

“I gave up and never imagined that we would have a home again,” she says. “I just tried to think about my son, who was still very young and needed me to be strong.”

Cut and her family found refuge in temporary barracks built for individuals displaced by the disaster. Soon after their arrival, the American Red Cross and Indonesian Red Cross (PMI) psychosocial support programme began providing support to survivors in the area.

Early on, the programme focused on barracks and temporary living centres to provide help for those who needed it most - survivors like Cut who had lost nearly everything in the tsunami and were separated from the traditional support networks of friends, family and neighbours that enable individuals cope with and overcome tragedy.

Along with several fellow residents, Cut took part in activities focused on helping affected individuals to cope. Altogether, the American Red Cross and PMI provided emotional support to more than 30,000 survivors like Cut in the six months following the disaster.

Actively engaged in community life before the tsunami, Cut soon became a community psychosocial facilitator, helping to organize supportive activities within the barracks and providing solace to those who were still grieving.

Heal from the trauma“Survivors really needed this kind of assistance,” she says. “It allowed us to come together and begin to heal from the trauma, even while we were still unsure about the future and mourning those we had lost.”

Four years later, she and her family have moved into a new home on the land where their old village once stood. Cut has started a small business selling clothes and remains active in her community. So when the American Red Cross and PMI community-based first aid (CBFA) programme began in her village, she was eager to get involved.

The programme addresses the longer-term health needs of tsunami-affected individuals through outreach and education about emergency first aid as well as common health threats. The disaster destroyed more than 400 health facilities and displaced or killed nearly a third of all health workers in Aceh, further weakening a healthcare system strained by nearly three decades of conflict.

Though significant progress has been made in restoring health services, many, especially those in rural areas, remain unable to access basic health care. Preventable diseases such as dengue and malaria remain common and are all too often fatal.

As a health volunteer, Cut feels empowered to educate her friends and neighbours about health risks and how to avoid them. For several hours a week, she visits fellow villagers in their homes and discusses common health issues in their community.

In total, the programme will train volunteers like Cut to educate individuals in 140 villages in Banda Aceh, Aceh Jaya, Sabang and Bireuen.

“Other mothers often ask me questions about their children, about nutrition or about how to detect if there is a serious problem, like dengue,” Cut says. “I am glad that I can provide information and help people, as it could be a matter of life and death.”

Through first aid and other emergency training, Cut says she feels prepared if there is another disaster.

“Before, I would have been scared and might have panicked,” she says. “But now I know exactly what to do if some is seriously hurt and needs assistance.”

Good on you Bob. It is great work you and your team are doing.

Thanks for your comments. I will be back in NZ next Mondau for almost 4 weeks so hope we can catch up.
Bob

Kia ora Bob,
Ditto to Jamie's sentiments. The results speak for themselves.
The Tararua's have claimed the lives of two experienced trampers caught out in a blizzard just short of Kime hut. A lot of snow this winter. My thoughts go out to their families. Have a safe trip to your Turangawaewae Bob.
Cheers,
Robb

Great work Galal!!! It looks like good things go hand in hand with disaster. Thanks to the aid there is clean water and sanitation.
great job

Very sad about the death of 2 people in the Tararua's. In bad weather, it is a deathly place to be in. Thanks for your feedback. Bob

Galal is indeed a great man who has brought houses and water and sanitation to thousands of people. I deeply admire people like him with such empathy and commitment to those in need. Bob

If you have any free time in Wellington or around after the 26th then I'd love to cook you dinner or have a beer.

Hope you bring some warmth with you from Indonesia, though thats probably the last thing you want!

I will let you know my plans when I arrive.

You have a wonderful way of sharing the grief, hope and reality of folks in the most profound way. I'm please with your report on the field trip to Aceh that gives an insight on the splendid work the Red Cross and its volunteers are doing to lift the hope and spirits of folks who have experienced the fury of natural disasters. Thank you very much for keeping me au fait with the activities of the Red Cross in the Asian continent.

This report of yours is surely a breath of fresh air amid the endless heaps of bad news being dished out by mainstream media, no wonder there is so much stress in this world. Your blog is so invigorating to read - about life struggles, coping skills and beating the odds of living in challenging environments.

Always good to see your name and receive feedback. I am pleased to be able to inform people about some of the positive realities at community level in Indonesia.

This won't have effect in fact, that's exactly what I believe.

Thank you for helping Acehnesse... to brothers from all NGOs... we will never your kindness... keep in supporting us anytime...

>>Thank you for helping Acehnesse... to brothers from all NGOs... we will never forget your kindness... keep in supporting us anytime... @a hello from Aceh<<