My late father who was born a 100 years ago, told me that when his Mother was pregnant with him, there was an incredible fear about the world coming to an end, and it was likely to be triggered by the appearance of Hayley’s Comet due in mid 1910.
Sure enough, it almost happened when my Grandmother was in her home in the Port of Lyttelton in New Zealand, she heard a huge bang and was convinced that the world was ending , as she collapsed on the floor, in the advanced stages of pregnancy.

The big noise was a parcel thrown by the postman (mailman) onto a wooden floored veranda of their house. So the world did not end in 1910, but is it going to end in 2012 ? I don't think so ? 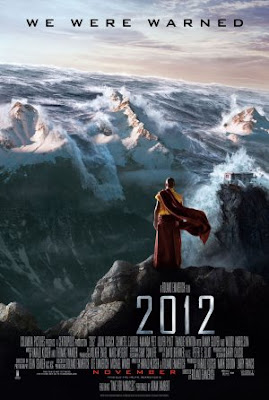 I saw the apocalyptic tale in the movie, 2012, directed by Roland Emmerich, on the flight from New Zealand to Jakarta last Friday, and whilst stunned and shocked by this possible scenario, I prefer to believe my Indonesian friend Danny Hilman Natawidjaja, an internationally reknowned seismologist. Danny and I appeared late last years on Al Jezeera Tsunami special where he explained that the world can expect more Megacrush earthquakes as it is a very active time in terms of the movement of the earth's plates. Since that pronouncement in early December, we have seen devastating earthquakes in Haiti and Chile. Danny also predicted the likelihood of an earthquake of over 8.5 on the Richter scale, a megacrush accompanied by a tsunami off the coast of Sumatra. This would possibly be an earthquake similar to that generated by the Boxing Day Day Tsunami in 2004. 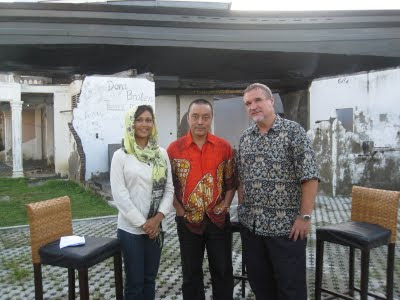 ( L to R) Fauziah Ibrahim, Aljazeera presenter, Danny Hilman Natawidjaja, Seismologist and Tsunami expert and myself in Banda Aceh in mid December 2009.
Danny who has been studying the Mentawai fault zone off the coast of Sumatra for 12 years together with fellow researcher Prof Kerry Sieh from the Nanyang Technology University (NTU), Singapore, believe that the pressure built-up could cause a 8.8-magnitude earthquake Indonesia`s Sumatra island within 30 years, triggering a tsunami and making last September 30`s 2009 deadly temblor look tiny by comparison. Sieh said.Likening the pressures under the affected fault to a coiled spring, he said the recent quake "had really very little effect in terms of relieving the spring" which will unleash pent-up energy possibly within the next 30 years.
We have to acknowledge that earthquakes have been happening forbillions of years, and every year there are over one million earthquakes worldwide, and all of those one million earthquakes move the Earth on its axis?
The devastating earthquake in Chile that killed almost 700 people probably also shifted the Earth’s axis, say NASA scientists, permanently making days shorter by 1.26 microseconds. But since a microsecond is one-millionth of a second, you may not have noticed.
Richard Gross, a geophysicist at NASA’s Jet Propulsion Laboratory, says he has done the calculations. Gross says the earthquake, which measured 8.8 on the Richter scale, moved large amounts of rock, altered the distribution of mass on the planet, and moved the Earth’s axis by about 2.7 milliarcseconds (about 8 centimeters or 3 inches). The change in axis directly impacts Earth’s rotation, and the rate of the planet’s rotation determines the length of a day.
So let's be fair. We have given the scientists their chance to explain so I would like to give Dan Boyd a chance to explain a fairly united Christian perspective on it
Is it possible that the Chile earthquake coupled with the Haiti earthquake, are precursors of the coming 2012 Mayan calamity? A growing number of internet searches suggest that the thought is catching on.
Without a doubt, these two earthquakes have shocked and horrified the world like nothing else in recent history. The degree of damage and the astronomical loss of life is staggering. Many of us, including this author, know people who are living and serving in those countries. These catastrophies have hit very close to home.
But do these tragedies necessarily prove that something of a grander scale is coming in 2012? Are they a pre-cursor? Of course, only history will tell. But there are some things we can be sure of.
1. There is no proof that any calamity is going to happen in 2012.
2. The Bible is still true, no matter what happens in our hemisphere this year, or in 2012.
3. People who look to the "super natural" or the "occult" will always be fooled and deceived.
4. We should look to the infallible, inerrant, perfect Word of God (The Bible) for answers when tragedies of this nature occur.
5. Earthquakes have occurred from the beginning of time, and shall continue until Revelation 16:18 when THE BIG ONE hits, according to the Bible.
6. Instead of allowing our hearts to fill with fear and trepidation when "Acts of God" come our way, we should turn our hearts to the Lord Jesus, and give Him His rightful place in our life as King of Kings and Lord of Lords.
I have just tucked my two boys in bed and said goodnight. I will sleep well tonight knowing that 2012 was just a movie, an entertaining one at that, and our world should continue for many centuries to come. But we all need to be better prepared for earthquakes and tsunami as my friend Danny Hilman says, " they are on the increase and we can expect more Megacrush ones."
Posted by Bob McKerrow - Wayfarer at 04:47

Thank you for sharing your thoughts. I really
appreciate your efforts and I will be waiting for your next write ups thank
you once again.

Hi there this is somewhat of off topic but I was wondering if blogs use WYSIWYG editors or if
you have to manually code with HTML. I'm starting a blog soon but have no coding know-how so I wanted to get advice from someone with experience. Any help would be enormously appreciated!