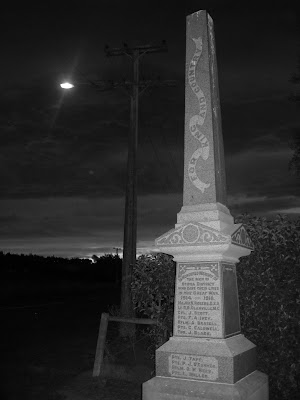 Underneath the lamplight in Otipua. Photo: Bob McKerrow

Age shall not weary them, nor the years condemn. At the going down of the sun and in the morning We will remember them.

I am in Otipua, South Canterbury. Last night as the sun set over my daughter's property, just behind the Otipua war memorial, I took a photo of the memorial underneath a lamplight. I thought of my Dad, James William Godfrey McKerrow, who fought in North Africa and Italy in WW II, and the eleven young men from the Otipua district who died in Europe fighting for their Motherland, Great Britain. One was a Major who won a DSO and a Captain, who won the Military Cross. Obviously brave men who bore names from Scotland, Wales, England and Ireland. 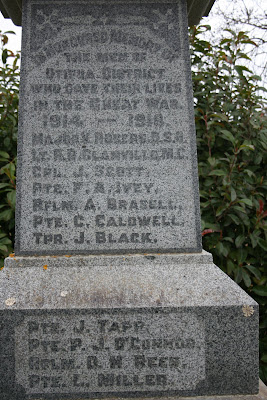 The names of those from Otipua who died during the First World War. May their names live on. Photo: Bob McKerrow

As I took the photo on the going down of the sun, I thought of all those Kiwis who fought in all the wars, and the song that Dad used to sing, and which he had a tattered copy of in five languages; Lili Marlene, came to mind.

Underneath the lantern, by the barrack gate,

Darling I remember the way you used to wait.

'Twas there that you whispered tenderly,

That you loved me,

Time would come for roll call, Time for us to part,

Darling I'd caress you and press you to my heart,

And there 'neath that far off lantern light,I'd hold you tight,

We'd kiss good-night, My Lili of the lamplight,

Orders came for sailing somewhere over there,

All confined to barracks was more than I could bear;

I knew you were waiting in the street,I heard your feet,

But could not meet,My Lili of the lamplight,

Resting in a billet, just behind the line,

Even tho'we're parted, your lips are close to mine.

You wait where that lantern softly gleams.Your sweet face seems to haunt my dreams.

My Lili of the lamplight, My own Lili Marlene. 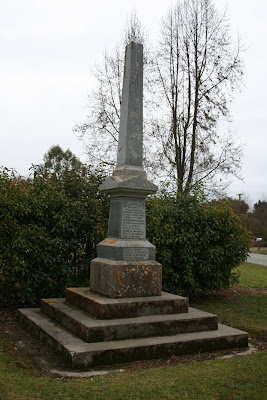 The memorial for those soldiers from Otipua who lost their lives for New Zealand in the Great War 1914-18 on the corner of Beaconsfield Flat Road and Beaconsfield Road, Otipua. Photo: Bob McKerrow

The Words of Remembrance at the beginning of this posting were written by Pericles well over two thousand years ago, long before the first ANZAC Day, but only a stone’s throw from Gallipoli:

Each has won a glorious grave - not that sepulchre of earth wherein they lie, but the living tomb of everlasting remembrance wherein their glory is enshrined. For the whole earth is the sepulchre of heroes. Monuments may rise and tablets be set up to them in their own land, but on far-off shores there is an abiding memorial that no pen or chisel has traced; it is graven not on stone or brass, but on the living hearts of humanity.
Take these men for your example. Like them, remember that prosperity can be only for the free, that freedom is the sure possession of those alone who have the courage to defend it.

Engraved forever at ANZAC Cove are these words from Kemal Ataturk, the Commander of the Turkish 19th Division during the Gallipoli Campaign and the first President of the Turkish Republic from 1924-1938:
Those heroes that shed their blood and lost their lives. You are now living in the soil of a friendly country therefore rest in peace. There is no difference between the Johnnies and the Mehmets to us where they lie side by side here in this country of ours. You, the mothers, who sent their sons from faraway countries wipe away your tears; your sons are now lying in our bosom and are in peace. After having lost their lives on this land they have become our sons as well.

At the going down of the sun...
I crouched in a shallow trench on that hell of exposed beaches... steeply rising foothills bare of cover... a landscape pockmarked with war’s inevitable litter... piles of stores... equipment... ammunition... and the weird contortions of death sculptured in Australian flesh... I saw the going down of the sun on that first ANZAC Day... the chaotic maelstrom of Australia’s and New Zealand's blooding.
I fought in the frozen mud of the Somme... in a blazing destroyer exploding on the North Sea... I fought on the perimeter at Tobruk... crashed in the flaming wreckage of a fighter in New Guinea... lived with the damned in the place cursed with the name Changi.
I was your mate... the kid across the street... the med. student at graduation... the mechanic in the corner garage... the baker who brought you bread... the gardener who cut your lawn... the clerk who sent your phone bill.
I was an Army private... a Naval commander... an Air Force bombardier. no man knows me... no name marks my tomb, for I am every Australian or NZ serviceman... I am the Unknown Soldier.
I died for a cause I held just in the service of my land... that you and yours may say in freedom...

I just concluded writing up some remembrance of my own and popped over to your blog for a visit.

I wasn't aware Pericles wrote those words, or even of their ancient origin. It makes them even more special.

I hope your visit to New Zealand is going well and you get some views of the mountains, or walk amongst them if you have time

Yes it was Pericles who wrote those hallowed words. Amazing, isn't it.

Went up to Tekapo today and was planning to go to Mount Cook, but at Tekapo they told me about the terrible weather and high winds at Cook, so just walked around Tekapo. I am enjoying the holiday but too short. Leaving this Friday for Jakarta.

Spare a thought for my father, who currently rests in peace at the Crematorium on Beaconsfield Road, within sight of the cliffs at Mt Horrible. A veteran of the Italian campaign in WW2 - it was a great moment for me visiting Cassino last year and paying my respects to the New Zealanders at the cemetary there.

Spare also a thought for Chris Jillett with whom I spent a great week up the Tasman in the late 80's. Chris was an old friend and we went off for a week in late-March to "celebrate" my impending departure to the corporate world.We had both studied Laws 101 at the same time but he turned his back on a legal career and went off to Fox Glacier.

We were blown off the col between Malte Brun and Aiguilles Rouge on our first day out, had an epic on Malte on our second day - we went left when we should have gone right and ended up in a wonderland of near-vertical weetbix and snowless gullies - and topped it off with an ascent of Aiguilles Rouge to save our faces. Sadly, it was to be our last trip to the hills together.

The call of the hills is getting louder and I spend hours gazing at the Southern Alps on Google Earth. Soon it will be time to go home I think.

I gazed at the Southern alps today from Tekapo, but in worsening Nor Westerly weather. Decided not to go to Mt Cook as pilots in Tekapo said there were 100 km winds and poor visibility. Have to go back to Ch Ch tomorrow and Jakarta on Friday so no time to dither.

We drove down the road today past where your Dad rests in peace. I prayed for them all the other night when out at the junction war memorial.

Yeh, I spare a thought for Chris Jillet, a fine climber. Thanks for telling me about your trips together . I climbed a few peaks with him in 1990-91. Yes, i think the good die young.

Just watched NZ beat Oz at cricket and its past my bed time.

Which battalion was your Dad in on Monte cassino ? The 23 rd ?

Yes, you need to come back to the Alps. They are calling us.

I believe it was the 26th. Went to Egypt for training then left for Italy and went all the way up to Trieste where the War ended. Sailed home on the Dominion Monarch and a life spent in Timaru.

My father never left New Zealand again (never left the South Island) although he often spoke of going back to Italy. I have now done that for him.

Have a good trip back - I believe there is a new disaster waiting for you.

Good to get that news about your Dad being in the 26th. My Dad went to Eygypt and fought there for some time before moving to Italy. He was in Barri at the close of the war. He The war left a big impression on him and affected the lives of so many on their return. That's another story, a long one.

I leave in a couple of hours and i will have an enjoyable trip back. As always there is a disaster waiting. I had a lovely trip by Intercity bus from Timaru to Ch Ch yesterday with my boy. I love travelling by bus as it is a chance to talk to people.

Kia ora Bob,
Travel safely my friend. I think of my own father whom served in WWII and fought on New Guineau.
Cheers,
Robb

Let's remember your Dad too. What a war they had to fight and I often think of the outcome had we lost ? We arrived late last night in Jakarta and Ablai and I are both up early as we can't sleep. Sorry I didn't contact you Robb. we were there 11 days and little time outside of family.

Thank you my friend from Asia, probsa=bly Japan: Good that you enjoy my blog.