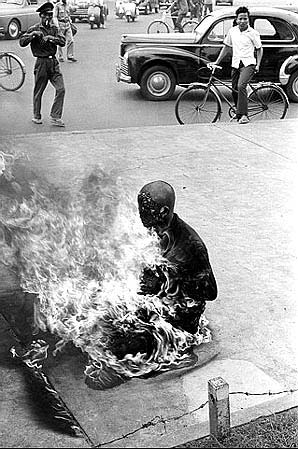 Hòa thượng Thích Quảng Đức was a Vietnamese Mahayana Buddhist monk who burned himself to death at a busy Saigon road intersection on 11 June 1963. Thích Quảng Đức was protesting against the persecution of Buddhists by South Vietnam's Ngô Đình Diệm administration. Photos of his self-immolation were circulated widely across the world and brought attention to the policies of the Diệm regime. Malcolm Browne won a Pulitzer Prize for his iconic photo of the monk's death, as did David Halberstam for his written account. After his death, his body was re-cremated, but his heart remained intact. This was interpreted as a symbol of compassion and led Buddhists to revere him as a bodhisattva, heightening the impact of his death on the public psyche.

I worked in Vietnam throughout 1971 with a Red Cross refugee welfare team in Binh Dinh province, and came back in 1973-74 for a further year working for New Zealand Red Cross IDP team in Pleiku, and saw a huge amount of war, suffering and hardship. Then in 1975, a huge tragedy occured when my best friend, Mac Riding, who replaced me as leader of a New Zealand Red Cross team, was killed when an Air Vietnam was shot down by North Vietnames troops in Pleiku. I travelled from Geneva to Saigon to try and locate the body and left a few days before the fall or liberation of Saigon. Death, destruction, exploitation, maiming, napalm, defoliants such as Agent Orange, are images that stick in my mind.

But of all the images taken during the Vietnam war, two I will never forget. The one of Hòa thượng Thích Quảng Đức, The Buddhist monk who set fire to himself. and Kim Phoc the young Vietnames girl running naked screaming with pain as napalm 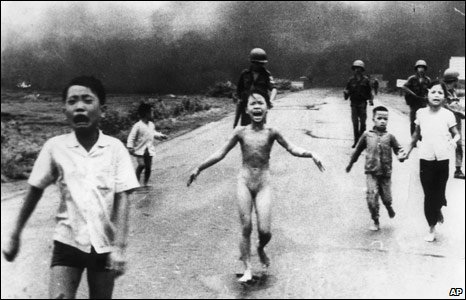 The photo of Kim Phoc in the centre, has haunted me for many years.

An article on a BBC website this week brought back a flood of memories of my years in South Vietnam.

In 1971 I worked for the Red Cross for the first time and was right in middle of the South Vietnamese Army and the US forces dropping napalm and agent orange and other defoliants. Scorched jungles and villages fried by napalm and agent orange, are some of the memories that come back to me when I am sleeping.

Kim Phuc, the Vietnamese girl in one of the unforgettable images of the Vietnam War , has been reunited by the BBC with Christopher Wain, the ITN correspondent who helped save her life 38 years ago.

When Chris last saw Kim, she was lying on a hospital bed with first-degree burns to more than half of her body, after a South Vietnamese napalm bomb attack.

It was 8 June 1972 and Chris and his crew had been in Vietnam for seven weeks, covering the conflict for ITN.

I found our reunion much more moving than I'd anticipated... Kim was quite emotionally charged, and that's catching

He remembers the day clearly: "That morning we'd arrived at the village of Trang Bang, which had been infiltrated by the North Vietnamese two days earlier. They were dug in, awaiting a counter-attack.

"In the late morning, two vintage Vietnamese bombers started to circle overhead - this wasn't anything unusual, but because we had been into the village we knew something was going wrong."


Many of the villagers had already fled to the shelter of a temple, among them nine-year-old Kim.

"We thought this would be a safe place - but then I saw the plane - it got so close," she remembers.


"I heard the noise of the bombs then suddenly I saw the fire everywhere around me.

"I was terrified and I ran out of the fire. I saw my brother and my cousin. We just kept running. My clothes were burnt off by the fire."

Chris and his crew were about 400m from the point where the four canisters of napalm had exploded.

"There was a blast of heat which felt like someone had opened the door of an oven. Then we saw Kim and the rest of the children. None of them were making any sound at all - until they saw the adults. Then they started to scream."

As Kim ran down the road, her arms outstretched and screaming for help, he took what is now seen as one of the most memorable images of the Vietnam War.

She was still running when Chris stopped her and poured water over her, while directing his crew to record the terrible scenes.

Chris helps Kim as the horrific scenes are captured on film

"We were short of film and my cameraman, the late, great Alan Downes, was worried that I was asking him to waste precious film shooting horrific pictures which were too awful to use. My attitude was that we needed to show what it was like, and to their lasting credit, ITN ran the shots."

Nick took Kim to the nearest hospital, the US-run Saigon First Children's Hospital. Shortly afterwards, his photograph and the film footage appeared all over the Western media.

One result was that everyone wanted to know what had happened to the little girl.

It was Chris who found Kim the following Sunday, in a small room at the British hospital.

"I asked a nurse how she was and she said she would die tomorrow," he says. So he got her moved to a specialist plastic surgery hospital, for life-saving treatment.

Kim stayed in hospital for 14 months and went through 17 operations, remaining in constant pain to this day.

Her image became a lasting memory for a generation - but the little girl herself disappeared from public view.

Then, 10 years later, a journalist from Germany tracked Kim down.

She was at university studying medicine but the Vietnamese government cut short her studies and ordered her back to her village to be filmed and interviewed. She was now a propaganda tool.

Even when she succeeded in resuming her studies, this time in Cuba, she was still expected to fulfil her duties as a "symbol of war".I realised I have a powerful gift... now that I have freedom I can control that picture


It was at Havana University that she met Toan, a fellow student from Vietnam. They married and took a honeymoon in Russia, which provided them with a unique opportunity to flee to Canada.

"I heard rumours that a lot of Cuban students stay in Canada on the way back from Moscow, when the plane stops to refuel. By doing this I was finally able to gain my freedom."

Kim settled down to a peaceful and anonymous life in Canada with her husband and two children, but in 1995 she was traced by another journalist and the picture was splashed across the front page of the Toronto Sun.

"I wanted to escape the picture because the more famous it got, the more it cost me my private life. It seemed to me that my picture would not let me go," she says.

However, the realisation came to her she did not have to remain an unwilling victim. The photo was, in fact, a powerful gift that she could use to help promote peace.

"I realised that now that I have freedom and am in a free country, I can take control of that picture," she says.

This idea led her to establish the Kim Phuc Foundation, which provides medical and psychological assistance to child victims of war.

Chris continued with ITN for another three years as defence correspondent, covering amongst other things the Yom Kippur War and the invasion of Cyprus. Later he moved to the BBC.

He retired in 1999 and never expected to see Kim again.

"At the time, it was just another story, though an appalling one. It was certainly the worst thing I ever saw.

"Later, when interest was rekindled, I felt that Kim was being used. That was why 10 years ago I declined a proposed on-screen reunion with her on the Oprah Winfrey Show - it sounded exploitative."

Now, having met Kim, he's changed his mind, and no longer thinks of her as a victim of that picture.

"Despite everything that has happened to her, and all she's endured, she's become a very impressive woman."

Thanks to the BBC for permission to reproduce the story on Kim Phuc and Christopher Wain.
Posted by Bob McKerrow - Wayfarer at 01:40

Impressive story of a victim that became victorious! Thanks for sharing the story.

I am pleased you enjoyed the story. Isn't she an amzing woman ! Bob

Absolutely Bob! Some people sure take some amazing journeys through life.

Yeh Jamie, whether water skiing on Wanaka or doing some of your amazing endurance events, we are all on amazing journeys. Bob