A visit to the north of Sri Lanka to see Red Cross programme for internally displaced people. 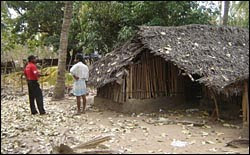 We visited the districts of Vavunyia, Kilinochchi and Jaffna. Next month I move to Sri Lanka to take up my new role as head of delegation for the International Federation of Red Cross and Red Crescent Societies (IFRC) so this visit was a familisation and handover one.
In Jaffna I was very impressed with the SLRCS owner driven housing programme that was supported by IFRC. Over 900 houses were built for people whose homes were destroyed by the Tsunami in 2004. I also visited a large hospital in northern Jaffna that the SLRCS/Australian Red Cross had repaired and modernised after being flooded by the tsunami.

In Kilinochchi district the SLRCS/German Red Cross have transferred cash to 50 families for the start of the  Red Cross owner-driven housing programme in this district for IDPs. 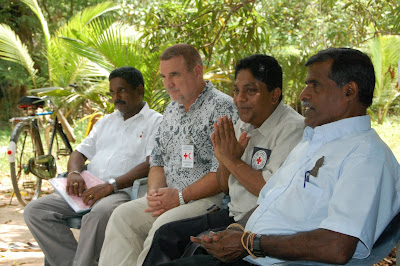 I travelled with my good friend Tissa Abeywickrama, (2nd from right),  Col. Mudagalle (far left), in photo above. The gentleman on the far right is the village administrator in one of the villages where the SLRCS are working. Photo: Barry Armstrong

So apart from the group pictured above, Chitravel and Barry Armstrong were also part of our group. Rather than tell my story, here is a typical story of a displaced family in the north.

Looking at the ruins of a place he once called home, Muttu Shivapatham, 58, remembers how life used to be just two years ago when he lived in the city of Kilinochchi in northern Sri Lanka.

A farmer by trade, Shivapatham has three daughters and a son who is now studying at Jaffna University. More than a decade of conflict certainly made life hard for this family, but Shivapatham did what he could to make ends meet.

Kilinochchi is located on Sri Lanka’s A9 road, which connects the capital Colombo to Jaffna. It was considered the de-facto capital of Tamil Tigers (LTTE) territory, at least until 2 January 2009, when the Sri Lankan government's military re-took the city. Most of the people living in Kilinochchi are Tamils and the district has been one of the island's most important farming areas since pre-historic times. 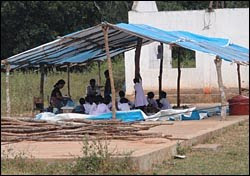 Moving to safety
As the fighting between government forces and the LTTE intensified in January 2009, Shivapatham, his family and the rest of the people in their town decided to move to a safer area - Mullativu - which was also the LTTE's main military base. Conditions were harsh as the family did not have a proper place to sleep or basic necessities of life.

Many Tamils were displaced during this period of fighting and began to move on to safer areas in the north of Sri Lanka, while the military was launching an offensive from the south against the LTTE.

During the conflict, the Sri Lanka Red Cross Society (SLRCS) was at the forefront of humanitarian action, providing services to survivors and assisting vulnerable people in a coordinated operation led by the International Committee of the Red Cross (ICRC).

As months passed by and the war came to an end, Shivapatham had the opportunity to visit his home - or what was left of it - in Kilinochchi. Looking at the ruins, Shivapatham shed tears thinking about the past in the place where he grew from being a child to becoming a father.

Rebuilding his life, his home and his legacy is what Shivapatham has on his mind. He says: “Regardless of everything that has been destroyed, I am happy to be home.”

"First of all, we need houses to live in, and then we need help to rebuild our livelihoods. Geographically, Kilinochchi has some positive aspects such as water and land. So with a little bit of help, I think we can rebuild this place into an economic hub in the north."

The Red Cross Red Crescent is already there, helping the most vulnerable: "We are assisting the people in these camps by attending to their medical needs, providing them with drinking water and increasing their level of sanitation," says the Red Cross branch executive officer in Vavuniya, Ronald Srikanth. He believes that more assistance is needed, especially around building livelihoods and rebuilding homes.

Support for the displaced

The Sri Lanka Red Cross never stopped their work, even during times when violence had increased. Helping elderly people who had been displaced and attending to medical needs of people living in camps were important activities throughout the conflict. "We have been working with several other organizations to improve the quality of life in the camps for internally displaced people and to help them get back in their own two feet," says A. Suthagar, the branch executive officer of the SLRCS in Mannar.

The mood of most people returning to the north is upbeat as they are delighted to come home regardless of the current conditions.

The words of Shivapatham reflect the views of most people when he says: "It's alright that everything is destroyed. We can rebuild it. After all, we are happy that we have a place to call home." 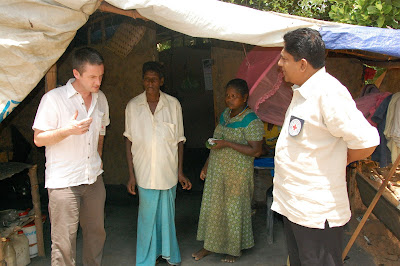 A husband and wife (centre) discussing their new house design with Tissa Abeyrickrama (right) and Barry Armstrong (left) in Kilinochchi.

I know some of you may be interested in the details of the SLRCS recovery operation that we are supporting along with other RC Movement partners. The SLRCS have identified an integrated programming focus in support of the return and resettlement of the affected population through:

• Immediate support with first aid, psychosocial services and referral transports while in transit from camps and temporary locations;

• Health and care services, including water and sanitation, in the selected areas of operation as returnees settle;

• Shelter interventions, including construction of permanent houses and repairs to partially damaged houses;

• Disaster preparedness and risk reduction with focus on building community resilience to deal with future emergencies.

This in turn necessitates the strengthening of the SLRCS’ institutional capacity in the target districts, including mobilizing the appropriate skills and competencies in branch staff and volunteers to provide services to local communities, in re-establishing the SLRCS branch structures, and in maintaining the branch capacities to ensure delivery of services to communities in the longer term. 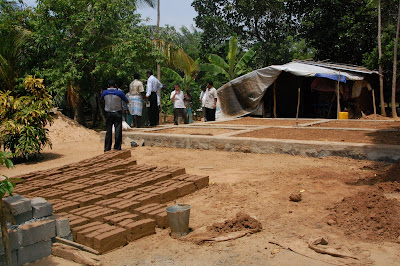 Red Cross owner-driven houses are well underway. Foundations are completed, bricks being made and the owners designing the house they desire. Photo: Barry Armstrong

Shelter component will be supported by activities from the health, water and sanitation, and disaster management sectors. Shelter as a sector will provide support to rebuild 800 totally destroyed houses and repair 1,200 partially damaged houses. Health component will focus on provision of first aid as well as the implementation of community based health programming. In water and sanitation, activities will focus on ensuring improved access to safe water, sanitation and hygiene promotion in order to maintain a safe and healthy living environment. The overall assessment of communities’ capacities and risks will create a platform for developing activities in resource and risk mapping and local response planning. This includes a management of common data collection and utilization between all programme components.

The SLRCS needs more funding for this programme so I hope you will be able to support them.

Moving article Bob. A pleasure to have worked [briefly] with you.

A pleasure to have met you and i appreciate the great work you have done for the Red Cross in Sri Lanka.

Great stuff, Bob. You're going to have a great mission there, well-earned. John