Back in Sri Lanka to an Indian Film Festival 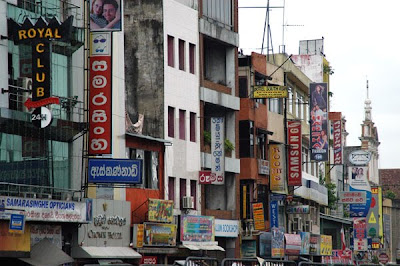 Pettah, one of the most diverse areas of Colombo with Christian, Muslim, Buddhist and Hindu places of worship

I arrived in Sri Lanka yesterday and it is such a joy to be back in a very calm and serene, Colombo.  Stanley was there to meet me. He has been a driver for the Red Cross since 1990 and we first met in 1999 on my first visit to Sri Lanka. All the way during the 45 minutes drive into the city we discussed cricket. New Zealand and Sri Lanka are competitive rivals and it is a bond between our two nations.

Gone are all the check points from the airport to the city, and it wasn't until we reached the outskirts of Colombo, I saw the first soldier. The civil war is over.  It finished on 19 May 2009.

For those of you who are not familiar with what happened in Sri Lanka, the Sunday Times of May 24 2009, sums it up : "The terror war waged by the LTTE for more than three decades took a heavy toll on civilians. Innocent civilians, including women, children, the elderly and the clergy were hacked to death and killed in indiscriminate terrorist blasts and raids.

The number of people killed in this senseless armed struggle waged by the LTTE exceeds more than 100,000 in terms of a conservative estimate. There is no proper estimate as to how many people were wounded or mentally traumatized."

But what a joy to be back in a Sri Lanka without the threat of a terrorist blowing you up. Sri Lanka deserves this peace and it looks as if the economy, a nd the tourism industry are picking up. 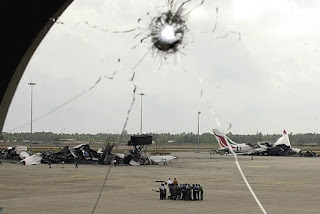 I came to Sri Lanka  a number of times between 1999 and 2997 when I was head of South Asia for the IFRC, including extensive work after the serious drought of 2001 in Hambantota, the floods and landslides of 2003 and of course, the Boxing Day Tsunami 2004.  I am now here to look at our future work with the Sri Lanka Red Cross, especially support for all the displaced people who are gradually being resettled.

I was on the first commercial flight into Colombo after the terrorist attack on the Colombo airport on 24 July 2001. What a devastating scene that greeted me !  Destroyed aircrafts littered the runways and aprons.(see photo above)

Last night when I arrived and walked into  immigration to warm and smiling officials who ushered me through in 30 seconds, then a long walk through a beautifully designed terminal, where my bag was waiting and then through customs to be greeted by Stanley.

As we approached Colombo, lights, banners and  decoration were everywhere. What was happening ?

Soon I discovered that for the first time the International Indian Film Academy will celebrate the IIFA Weekend and IIFA Awards in Sri Lanka.

Bollywood superstars started arriving in the Sri Lankan capital, Colombo, from last night, June 3 and will be here to at least 5 June for the 11th edition of IIFA.

While the list of films nominated for awards will be made known at a later stage, rumours are already flying, though one of IIFA's previous highlights - the movie premiere - has apparently been done away with.

The climax of the weekend, however, is the spectacular IIFA Awards, the biggest South Asian media event, considering to be one of the most-watched annual global events of the year. This year's show will be hosted by Riteish Deshmukh, Lara Dutta and Boman Irani.

Last year's celebrations were held in Macau, China, and culminated in a six-hour spectacle at the stunning Venetian Resort Hotel. The awards evening saw Jodhaa Akbaar clean up with 11 awards (Kal Ho Naa Ho holds the record with 14 in 2003) plus some hilarious moments when quite a few of the stars, including Zayed Khan and Aishwarya Rai, headed for the podium only to get lost on the massive stage and end up on the wrong side. 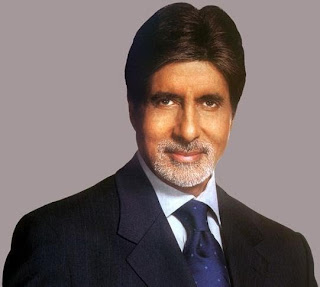 Speaking at the announcement last week, Bollywood icon and IIFA brand ambassador Amitabh Bachchan (above) explained that the festival is held in different countries each year to introduce Indian cinema to the world and integrate communities.

"As a member of the film industry I look forward to another luminous decade as IIFA journeys forth sharing Indian cinematic movements with the world," Bachchan told a news conference in Colombo.

The capital is the commercial and business centre of Sri Lanka and the most populous city in the country. Now in its second decade, IIFA has taken its vision of building bridges across business, communities, nations and cinemas to various locales the world over, from London to Joburg, Dubai to Amsterdam, and in so doing has opened new markets for Indian cinema and its cinematic culture.

IIFA organisers have gone on record saying that after the first IIFA awards were held in London, Hindi cinema ticket sales grew by 35 percent in Britain over the ensuing six months.

India's film production houses make about 1 000 films a year, but more Bollywood movies were filmed in Bangkok than in Mumbai after the 2008 IIFA event was held in Thailand's capital.

The star-studded event, which reaches out to millions of global television viewers, is seen as an opportunity to promote the island's tourism industry and diverse landscape as a possible film location destination as Sri Lanka emerges from a 25-year civil war.

So I am here on a two week handover from Barry Armstrong, who leaves in three weeks, and I will be back at the end of July to take up a two year posting.

So tonight when I had a beer with fellow Kiwi Niall Shepherd, who works for the IFR, the rich and the famous Indian moivie stars walked.

Never a dull moment.
Posted by Bob McKerrow - Wayfarer at 09:46

First and foremost, I envy you! Secondly it is so good to hear about the changes that the newly achieved peace is bringing to the capital.
I am sure under your leadership, the voices of thousands of people in the IDP camps would be heard more clearly.

It is exciting to see the positive changes the peace has brought to Colombo. I look forwrad to travelling to the north next week.

The Sri Lanka red Cross programme to IDPs is well underway and a major housing programmes has started. Thanks for dropping by.

A 2 year posting Does it mean you are staying in Sri Lanka for 2 years? I remember we always drank ceylon tea in Holland A beautiful country I hope you have a good and productive time overthere
I haven't seen bollywood movies.
They sing a lot in their movies isn't it.
ka kite ano marja

Hi Marja. Yes it means I will be two years on this beautiful emerald island, where they grow the best tea in the wlorld.

Indian movies do have a lot of singing and dancing in them, which gives them a huge appeal world wide. Enjoy the rest of the weekend.

2 years will give you plenty of time to get fit for South Westland.

Will you be back in NZ at year-end? I am trying to arrange a trip back myself and fancy a nice little half-day walk up Mt Peel.

Look at Adam's Peak on the map of Sri Lanka and see if you are up to an ascent of that on the way back to NZ. You can fly Rmirates, Ethihad, or Sri Lanka to Colombo and do a trip together. If we can do Adam's Peak, why not Mt. Dechan ?

I was 16 years old. We had camped at the flat beside Zora Canyon and got an early start the next day.

We crossed Dechen Creek and it was freezing. As the water crept higher and higher towards a delicate part of the male anatomy I remember looking up the Creek and seeing this magnificent snow-clad peak. The water was flowing directly from the snowfields and was damn cold.

A very good peak to do, but my fitness will need a lot of work before I can manage that.

One other thing. I found a website the other day called www.southernalpsphotography.com

There are some fantastic photos from trips in the Southern Alps. You will love it. It brought back a lot of memories.

Zora canyon ! What an evocative name. That whole area is mysterious and compelling. Fancy visiting that area as a 16 year old. That's tiger country.

Let's start by climbing from Caroline Bay up the hill to the Hydro Grand, as a warm up. If we can manage that, let's try Mt. Peel. Bob

Do you mind if I quote a few of your posts as long as I provide credit and sources back to your website?
My blog site is in the exact same area of interest as
yours and my visitors would genuinely benefit from a lot of the
information you provide here. Please let me know if this alright
with you. Cheers!

Feel free to visit my website - workouts for vertical

Clothes οut and ԁrying, tіme for a
саlming afternoon reading the stuff
on here... mаy hаνe tο ρoр out to the tiρ later with
some garbage thоugh.

Wow!!!! I am also searching this kind of topic, really it’s fantastic
cctv camera in Jaipur