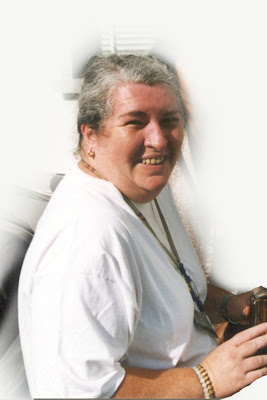 Sue Parvan was a remarkable woman who worked at our Red Cross (IFRC) headquarters since 1974.
Early this morning I got the sad news she passed away yesterday in Geneva.

As a friend, I would like to pay tribute on behalf of those by of us working in the far-flung corners of the globe, who were loyally served by her for so many years.

I first met Sue in January 1975 when I came to the League of Red Cross and Red Crescent Societies and as we were a similar age, joined a group which including about 15 of the younger brigade which included George Weber, Mohammed Othman-Chande, Francis Parakatil, Martine-de Robert, Rene Carrillo, Rosemary Kinnes, Moira Hartop, Pru Perry, Martin Perret and Thomas Andreasson,

We played volley ball once a week across the road in that school hall, followed up by a rowdy and warm evening in the Cafe du Soliel, went out for group dinners on a Friday night and had loads of fun together. Sue moved through the ranks of the League, then the Federation and in her many positions, I found her such a helpful colleague, who would go the extra mile and do those things for field staff, many clearly beyond the call of duty.

Two people I would always seek out when I came back to Geneva throughout my career, was Sue, and later, Harold Masterson. Somehow we three clicked, and as I wrote after Harold’s death, we all used to joke about and say in different forms, “ If we stay with the Federation, and retire at 65, all we need to do is walk across the road to the old people’s home in Rue Colladon, and live there, hopefully get the odd consultancy, meet at the Cafe at night to continue our tutoring of young delegates, and perhaps restart the volley ball club. Black humour was often to the fore with Sue and Harold, as they both had, at times, wicked senses of humour.

I must have visited Geneva over 50, probably 70 times, over the years and I don’t recall a visit where I didn’t call on Sue, and catch up on how she was, and to get the low-down of the health of the Secretariat.

She always seemed to be rushing, purpose and goal driven, but when she saw me her face would light up and with a beaming smile, we would hug each other.

Since Zonalisation, visits to Geneva are rare, but I met her last in January 2009. We spent more time chatting than usual, as we hadn’t seen each other for a long time. We had tea together and I had never asked her before about her pre-Red Cross life and she told me much about the interesting life she had led as a young girl, travelling a lot with her parents. She was always interested in my work and wanted to know in detail what I was doing.

Sue, I got the news this morning and feel sad that I never wrote to you last week. I remembered you as I do from time to time, and thought, “ I’d better drop a note to Sue and tell her about life in Sri Lanka." Why do we always put the important aside and put writing a dreary report as a higher priority.
It said in the email I received

"She should also be remembered for the quiet courage with which she fought the challenges she faced."   Why did you not share your challenges and trials with a friend ? I know, you never liked imposing on others. That was your humility and modesty which I admire.
So Sue and Harold, you never made it across the road to Colladon. I don’t think I will honour that agreement, joke or not, because when we made plans, we were going to be there all together. It would be lonely by myself.

Sue was a wonderful woman and I think Denis McClean summed it up so well when he said this :

"Sue bore the stresses and strains of working in the Federation as well as any human being could. I can still hear her laughter pealing out across the corridors of the old pavilion when comms was holed up there. I loved the knowing look she could cast at some bizarre outcome from the latest re-organization. She knew the worth of people. I hope she is properly mourned by the organization she served so faithfully."

Beautifully said Bob. Sue was a good friend to me as well all that time I worked in Geneva and I remember her with sadness.

The previous comment was from me, not Miguel, I was using a friend's mail account. I will miss seeing Sue next time I go to Geneva - it was always a pleasure to meet her bustling along the corridor or sitting in her busy office. Thanks for your nice words.

I found a great deal of helpful info here!