Christchurch - my home town battered but not beaten. 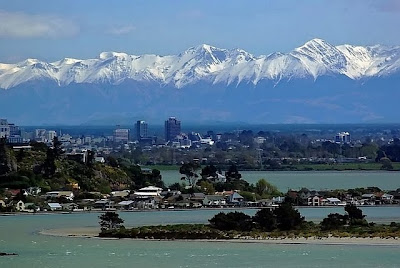 Christchurch, is there a more beautiful city in the world ?

Up to 120 people may be in the rubble of the CTV building and a further 22 bodies inside Christchurch's Cathedral Square, police say.

There are 238 people missing after Tuesday's 6.3 magnitude earthquake although some may have already left Christchurch before the disaster, police believe.

It comes as the official death toll from the quake rose to 76. 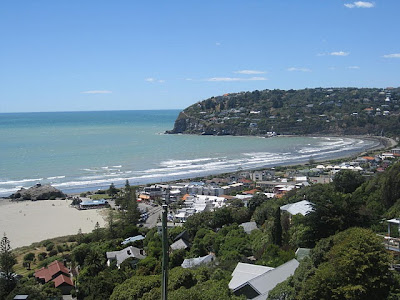 This was how Christchurch looked when I was there last July. This was taken from my good friend Robin Judkin's house in Clifton Terrace overlooking Sumner beach. Robin and his neighbours were directed to move yesterday as the hillsides were threatening to slide.

This was the city I trained in for three months in 1969 as a seismological and geomagbetics technician  before departing on a  Super Constellation plane for Antarctica where I spent 13 months. This was the city I departed from for my first Red Cross mission oversea in 1971. It was here I left with Paul Caffyn in 1989 for Hobart where we planed to be the first people to kayak the Tasman sea.

This is where I own a house and my dayghter Ruia and her husband Gavin live. Luckily they survived.

With possibly up to 200 people likely to have been killed by the quake, it is a city in mourning where rescue experts are working round the clock to save lives. I have located most of my friends from my Antarctic, mountaineering, skiing and Outward ound days, and friends made more recently living in Christchurch. I have been getting a constant flow of messages from them, but a few are still missing. 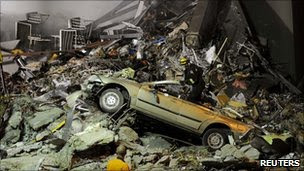 My old friend Dave Ellis who owns Earth, Sea and Sky outdoor clothing manufacturing company has seen his own business crash around him as have others friends, similar experiences.

My friend Marja sent me this message this morning:who is not only looking after her own children but other children from a 'home' and running a shower service.

"Bob I am so happy that your daughter is safe. Did she get trapped? We didn't know until 5 pm where our kids were. So great to see them walking through the fence. We are good now We've got a kid from the home here and otheres will come later to take a shower. Take care Arohanui ."

Being in Sri Lanka working on a Red Cross flood operation that has affected over 1 million people as well as a recovery operation for people affected by the conflict, I follow events very closely from afar. Starting by career with the New Zealand Red Cross I am proud of the work they are doing.

Red Cross has eight teams and over 100 staff and trained volunteers from all over the South Island currently working in Christchurch to support the relief efforts. Response and welfare teams from Christchurch, Timaru, Nelson, Blenheim, Dunedin, Invercargill, Queenstown and Greymouth are working in conjunction with other agencies such as Civil Defence, New Zealand Police, the local councils. Teams are conducting urban search and rescue, setting up welfare centres for displaced people and managing the logistics of distributing Red Cross supplies. Yesterday 200 large tents, 2000 water bottles and 1800 blankets arrived from the Red Cross warehouse in Auckland for distribution.

NZRC is not currently requiring or accepting donations of goods or volunteers at this time. New Zealand Red Cross are currently focusing on�roles supporting the CDEM response. Urgent email enquiries can be referred to our National Emergency Operating Centre at nzrceoc@redcross.org.nz
I just noted that Shell New Zealand is to donate $1 million to the Red Cross Earthquake Appeal. That's a wonderful start to a crucial appeal.


Today. Police Minister Judith Collins today described the horrific conditions rescue workers face, with bodies being pulled "in ones and twos" from the rubble.

"We've got 76 at the morgue at the moment and more coming through.

The names of those killed and missing will be released later today, Prime Minister John Key said earlier.

Earthquake victims are being held at mortuaries at Christhchurch hospital and Burnham Military Camp while the coroner's office deal with the aftermath of so many dead in Christchurch's earthquake.

Chief coroner Judge Neil MacLean said no bodies have had to be transferred out of the region and contingency plans to cope with the heavy demand was working well. "I am confident that in this time of immense grief and sorrow we can cope with whatever the death toll reaches."

Key has overhauled his Cabinet to free up Earthquake Recovery Minister Gerry Brownlee, who will drop his other portfolios to focus on the quake.

United States President Barack Obama has told John Key the US is ready to provide any further help needed in the earthquake recovery effort.

Key and Obama spoke on the phone for about five minutes just before midday in a conversation requested by US leader.

"The President asked about ongoing aftershocks and reiterated that the United States stood ready to provide further help, should New Zealand need it," a spokesman for Key said.

This is unbearably sad.

It is sad, but knowing the grit and determination of Cantabrian's, a huge determined provincial effort will see the City back on it's feet in a few weeks.

The toll is now up to 98 and expected to be much greater.

I don't know how people recover from this. The physical damage is one thing, the psychological trauma quite another.

My family and friends are ok. I'm glad to hear you've had good news of most of your friends, Bob, and I wish you the very best for those you haven't yet heard from. May the news all be good.

This is really bad news.I hope all should be right.My prayers are with all people who face this bad thing.

Now I am ready to do my breakfast, afterward having my breakfast coming yet again to
read other news.

Hi there, this weekend is good in favor of me, since
this occasion i am reading this enormous educational post here at
my house.