A dispatch from Otsuchi Japan

Patrick Fuller, communications manager for IFRC Asia Pacific, is currently in north-eastern Japan supporting his colleagues at the Japanese Red Cross Society. Patrick has been through major earthquakes in India, repeated and severe floods in South Asia, the horrific Indian Ocean tsunami, but he hasn't seen anything as bad as this. This is what he  saw today:

It is hard to find words to describe the scenes left behind in the wake of the tsunami that struck Japan’s north-eastern coastline on 11 March. As I drive up the coast from the town of Ishinomaki, the road winds through picturesque snow-capped mountain passes and down through scented pine forests towards the sea where a horrific scene is revealed. A series of small bays, which were once home to thriving fishing towns, now lie shattered and scarred. 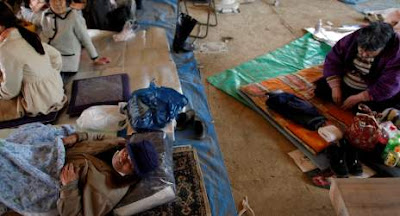 Otsuchi, in one of the evacuation centres where at least 500 people lie huddled on strips of cardboard under piles of blankets, it is clear that this is a tragedy that has hit the young and elderly the hardest. (IFRC)

Ten-metre waves swept in, decimating everything in their path. The remains of houses and their contents lie disgorged in thick dark mud. The town of Otsuchi in Iwate prefecture is possibly the most badly affected place on the coast. Residents barely had half an hour to evacuate to higher ground before the waves came in.

Of a population of 17,000, some 9,500 people remain unaccounted for and it is easy to see why. The receding surge of water left behind a wasteland of tangled wreckage, but worse was to come. Fuel from shattered fishing boats and severed gas lines ignited, turning the debris into a floating inferno.

And still the fires rage. Fleets of fire engines from all over Japan are battling to contain the flames, which have now spread into the surrounding pine forests. Civil defence teams move with purpose through the acres of cement and charred and twisted metal in their quest for bodies, but the hope of finding survivors is remote.

All my senses are overwhelmed – the constant noise of sirens fills the air and helicopters hover overhead transporting the injured to nearby hospitals. Otsuchi is a scene from hell.

In a recent visit to Otsuchi, the IFRC’s President, Tadateru Konoé, was shocked by the scene. “This is the worst I have ever seen in my career working with the Red Cross. It brings back memories of the scenes at the end of the Second World War, when cities like Tokyo and Osaka were flattened by bombing.”

In one of the evacuation centres, where at least 500 people lie huddled on strips of cardboard under piles of blankets, it is clear that this is a tragedy that has hit the young and elderly the hardest.

Hiromi Kinno, a nurse living in Miyako, is one amongst a crowd of people studying the many scribbled messages pinned on a makeshift notice board at the gymnasium. She came to look for her parents and young nephews who are missing.

“I’m worried whether they were able to escape. I’ve had no contact with my family and I found out about what had happened on TV. At first I couldn’t believe it, and I started imaging the worst and I had no cell phone connection, so I felt helpless and had to come.” 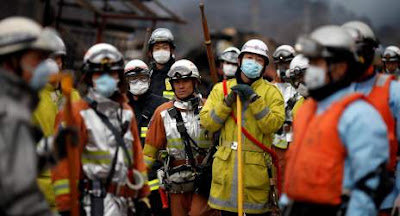 Otsuchi - Civil defence teams move with a purpose through the acres of charred and twisted metal and cement in their search for bodies but the hope of finding survivors is remote. (IFRC)

I see one elderly couple huddled around a wood stove in the corner of the vast gymnasium stare blankly into the flames. I later learn that they lost their entire family and their home. They are clearly in a state of shock.

Everyone here has lost a friend or family member to the tsunami. For the 80 Japanese Red Cross medical teams deployed to provide care for the evacuees, coping with trauma will fast become the biggest challenge.

I pass a rescue worker crouched by the side of the road leafing through the remains of a family photo album, strewn in the mud. It transpires that he is from Otsuko and has lost members of his own family. “I can only think of my children when I look at these photos,” he says quietly.

The stoicism amongst local people is extraordinary, but the apparent calm is deceptive. The blank expressions of most hide the trauma that they have suffered.

The Red Cross medical teams have fanned out across the length of the 400-kilometre-long disaster zone. Within 24 hours of the disaster striking, they had set up a network of emergency response units from where five-person teams, comprised of doctors and nurses, operate – moving out to different evacuation centres in nearby towns each day. 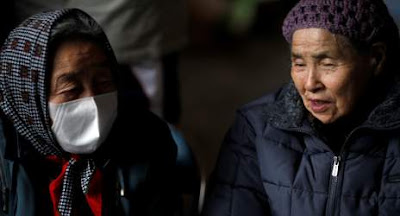 Otsutshi, one elderly couple huddled around a wood stove in the corner of the vast gymnasium simply stare blankly into the flames. (IFRC)

It took Toda Kazuko 12 hours driving through the night from his home town of Kobe to reach Otsuchi. Within hours of arriving, a tented clinic had sprung up and members of the team were treating patients in the evacuation centres. A veteran of the Red Cross Haiti earthquake operation, Kazuko was totally focused on the job at hand.

“We have more than 700 staff deployed and in four days the next rotation comes in,” he says before having to leave abruptly as an elderly woman shivering uncontrollably is stretchered in to the clinic, suffering from hypothermia.

The nights in Otsuchi are bitterly cold. With the temperature at minus 5 degrees Celsius, and no electricity or mobile phone coverage, survivors are isolated and having to cope with extreme living conditions. With fuel shortages and little food coming in to the few shops that remain open, some have resorted to scavenging through the debris for packets of dried food. With such absolute destruction, it is hard to see a future for this shattered community. 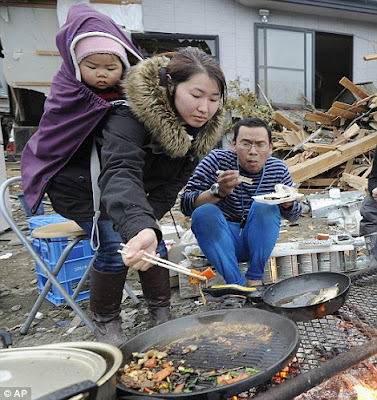 Squatting amid the ruins: A woman cooks for her family in front of their devastated house in Ishinomaki in Miyagi Prefecture, Reuters


Read more: http://www.dailymail.co.uk/news/article-1366395/Japan-tsunami-earthquake-Rescuers-pick-way-apocalypse-wasteland.html#ixzz1Glq9g9nz
Thanks to Patrick Fuller IFRC, Japan for this report.

Thanks Patrick and Bob for sharing the heartbreaking yet inspiring stories of survival, endurance and resilience of the Japanese people. So much to learn from this culture...

We have much to learn from this quake, especially as to why a country with such strict building codes and enforcement, was so badly affected. We also need to ask, why the tsunami warning system did not work as well as it should have ?