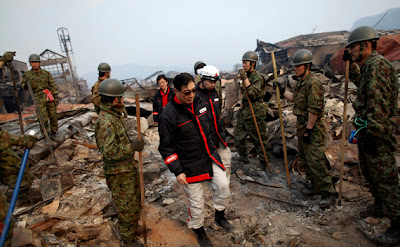 President of the International Federation of Red Cross and Red Crescent Tadateru Konoe walks among rescue workers searching through rubble in a residential area of tsunami-hit Otsuchi. "After my long career in the Red Cross where I have seen many disasters and catastrophes, this is the worst I have ever seen. Otsuchi reminds me of Osaka and Tokyo after the Second World War when everything was destroyed and flattened," Tadateru Konoe told Reuters during a visit to the coastal town.

The Japan Meteorological Agency on Sunday upgraded the magnitude of Friday's catastrophic earthquake to 9.0, making it the world's fourth-strongest in more than a century.
The agency had earlier put the magnitude of the quake off the coast of Miyagi Prefecture, northern Japan, at 8.8.
A 0.2 increase in magnitude translates into twice the amount of energy generated.
The energy released by Friday's quake was about 45 times that of the Great Kanto Earthquake that killed some 140,000 people in the Tokyo area in 1923, and about 1,450 times that of the Great Hanshin Earthquake that leveled much of Kobe in 1995 and left more than 6,400 people dead.

Other major earthquakes that have hit since 1900 are as follows: In 1952, a magnitudeearthquake struck Kamchatka. A magnitude 9.5 quake devastated Chile in 1960, and a 1964 quake in Alaska had a magnitude of 9.2. The 2004 quake off Sumatra, Indonesia, that triggered a tsunami that claimed many tens of thousands of lives had a magnitude of 9.1. 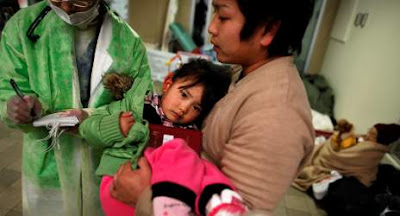 An injured girl is brought to a Japanese Red Cross hospital after being evacuated from the area hit by tsunami in Ishinomaki March 13, 2011. (Damir Sagolj/Reuters)

Earlier today, contact was made with the team travelling in north-eastern Japan, comprising Mr Tadateru Konoé, President of the Japanese Red Cross Society and IFRC, another member of the Japanese Red Cross and Patrick Fuller, the IFRC’s communications manager for Asia Pacific. The team travelled to Otsuchi where they saw the devastation of a number of small villages in at least five bays on the eastern coast of Japan.

On arrival in Otsuchi, the team witnessed the utter destruction of the town. The remains of a town which was previously inhabited by about 17,000 people was nothing but a sea of burnt, twisted metal and splintered wood. A few survivors remained, picking through the rubble in the hope of finding survivors – friends and family. For many, it will be a pointless quest.

To Mr Konoé, the destruction in this town alone brought home the true impact this disaster has had on the people of Japan. Almost lost for words, he expressed his shock only able to say, “I have never seen anything as bad as this before. It defies belief.” In this town, 9,500 people remain unaccounted for. The utter destruction leads us to believe that the potential for further survivors to be found remains slim. 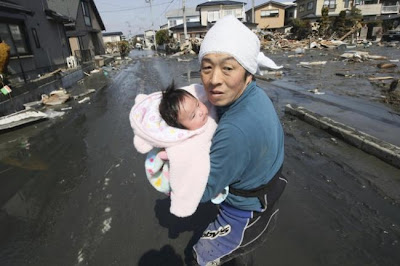 Upon hearing another tsunami warning, a father tries to flee for safety with his just reunited four-month-old baby girl who was spotted by Japan's Self-Defense Force member in the rubble of tsunami-torn Ishinomaki. Photo: Reuters

The Japanese Red Cross has already deployed a mobile clinic to the town to assist survivors, who remain without electricity, and with increasing concerns about access to water. For the Red Cross, the focus remains on the survivors – assisting them in any way possible.

In the words of Patrick Fuller, “It doesn’t get any worse than this. Half the town’s population or more have lost their lives.” In situations like this, the work of the Japanese Red Cross Society’s psychosocial support teams will be essential. Just as it may take weeks to discover the true extent of this disaster, it may take years for the people of towns like Otsuchi to even begin to recover from the trauma of this disaster.


As Japan continues to grapple with a rapidly evolving humanitarian crisis following Friday’s massive earthquake and tsunami – as well as the developing nuclear situation – the Japanese Red Cross Society is offering medical and psychosocial care for increasing numbers of survivors and evacuees.

Search and rescue workers are now discovering increasing numbers of bodies in areas that have previously been hard to reach because of ongoing tsunami alerts. And the number of missing is adding to the fear that the death toll could reach 10,000 or more.

“I have never seen anything as bad as this before. It defies belief,” said Tadateru Konoé, President of the Japanese Red Cross Society and the IFRC, who has just returned from a visit to Iwate prefecture in north-eastern Japan, one of the worst-hit areas.

There are now more than 430,000 people housed in some 2,500 evacuation centres, mostly in schools and other public buildings. In addition, Red Cross medical teams are reporting many cases of people arriving at hospitals suffering from hypothermia and at risk of pneumonia. Many people are suffering the effects of having swallowed contaminated water during the tsunami.

At present, 85 medical teams are operating out of hospitals and mobile clinics treating survivors. Each team includes a trained psychosocial nurse, who allows survivors to voice their grief and anxieties, as well discuss practical concerns. The Japanese Red Cross has 2,400 trained psychosocial nurses, and an eight-member specialist psychosocial team has just returned from a mission in New Zealand, where they were helping survivors of the Christchurch earthquake. They had no idea their services would be so badly needed at home, so suddenly.

As concerns mount about possible radiation leaks from nuclear power plants in Fukushima prefecture, Red Cross staff and volunteers are playing a key role in caring for the thousands of people evacuated from the 20-kilometre exclusion zone surrounding the affected plants.

All 47 of the Japanese Red Cross Society’s prefectural branches have trained nuclear decontamination teams and equipment, including special tents in which radioactive material can be washed off. The teams are designed to be mobilized in conjunction with the government’s specialist units, which have the equipment and expertise to measure radiation. So far, there has been no request from the government to mobilize these teams, but they remain on standby.

With the support of government authorities, the Japanese Red Cross is monitoring the situation in hospitals close to the exclusion zone, in case radiation levels rise and pose a risk to patients.

The cooling system failed at another reactor at the troubled No. 1 Fukushima nuclear power plant Sunday, as the government acknowledged that a meltdown may have already hit the quake-damaged site.


"We are dealing with the situation as though a core meltdown has occurred," Chief Cabinet Secretary Yukio Edano said at a Sunday morning news conference.

While government officials continued to urge the public to remain calm, Tokyo Electric Power Co., the operator of the plant, has been forced to resort to a number of unorthodox measures, including pumping in seawater, to cool reactor cores and prevent radiation from leaking out.

Radiation levels exceeding legally established safety standards were recorded at the boundary to the No. 1 Fukushima site, creating an emergency situation that TEPCO reported to the Ministry of Economy, Trade and Industry on Sunday.

TEPCO officials said nuclear fuel rods in the core of the No. 3 reactor had become exposed above the cooling water level.

While TEPCO officials were unsure if a core meltdown had occurred, they said water mixed with boric acid was injected into the core at 9:25 a.m. Sunday. By 11:30 a.m., the water level in the core had again risen above the fuel rods.

Edano later Sunday provided more details. He said that after the fuel rods were exposed for a short period, radiation levels around the plant reached a high level of 1,557.5 microsieverts. But the insertion of seawater to the core reduced the radiation level to 184.1 microsieverts after about an hour.

However, Edano noted that insufficient cooling of the core may have caused excess hydrogen to accumulate in the building that houses the core containment vessel.

That buildup runs the risk of triggering an explosion like the one that destroyed the building housing the No. 1 reactor at 3:36 p.m. Saturday, Edano said.

The government's top spokesman said that, like Saturday's blast, an explosion at the No. 3 reactor building would not likely damage the core containment vessel nor release large levels of radioactive materials.
Posted by Bob McKerrow - Wayfarer at 19:02

The worst devastation since the world war indeed. I am so worried about the radiation. There was an interview with a woman from Tauranga on the radio. She lives with her husband and her 4 month old 50 km from Fukushima. They were told to go to work and didn't get the whole story. She heard alarming news on the international news. They can't go anywhere though. There is no petrol. All shops are closed and they have food for about a week.

The situation is beyound description and can only be compared to 2004 Boxing Day tsunami.

I have s number of friends in the Japanese Red Cross and my good friend Patrick Fuller who is there, so I am getting some first hand reports. It gets grimmer day by day.

At$fifty-$one hundred OBD-II scanners are undoubtedly
very well well worth obtaining. The car's laptop or computer runs a collection of program assessments and monitors the motor.