I was debating in my mind as to whether to return to Christchurch next week for the memorial service for earthqukae victims as I lost a close friend and other people I knew. I also wanted to spend time with my daughter who survived the quake.

Whilst thinking of options of returning,  I got the news that an 8.9 magnitude earthquake hit the north-east of Japan's main island, and is the most powerful earthquake to hit Japan since records began, and the quake triggered a devastating tsunami.

Japanese TV showed cars, ships and buildings swept away by a vast wall of water after the 8.9-magnitude quake. A state of emergency has been declared at a nuclear power plant but officials said there were no radiation leaks. At least 40 people have been killed by the quake, which struck about 400km (250 miles) north-east of Tokyo.

The first thing I did was to SMS Yukimi Kitamura from Japan who works for me in Sri Lanka, and she informed that her family is OK, but her Father is stuck at work. Next I sent message of condolences to Japanese Ambassador Takahashi, a long-standing friend of Red Cross who I have gotten to know over the past seven months I have been living in Sri Lanka. He is a wonderful man with incredible wisdom and an amazing knowledge of world history. 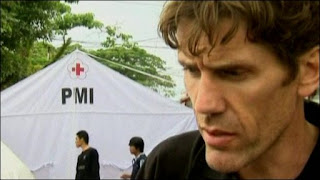 Next I saw Patrick Fuller (photo left) come on line on Skype, and I said " Patrick, you should be there covering the quake." He replied, " I am on my way." Patrick is head of communications for International Federation of Red Cross and Red Crescent Societies (IFRC) Asia and Pacific. We worked shoulder to shoulder during the hugely devastating Gujarat, India earthquake in 2001, and we supported the Japanese Red Cross set up it first ERU (Emergency Relief Unit). We lived in those first few days off the great dehydrated food the Japanese Red Cross ERU brought with them, and I worked with them again in the 2004 Tsunami, 2005 Pakistan earthquake, and the West Sumatra earthquake in 2009. Now I work with Yukimi on a programme for internally displaced people in the north and for flood victims.


Throughout those earthquakes and also working together on the Pakistan/Afghanistan border just after 9/11 occured and we were preparing for an influx of refugees from Afghanistan, I worked closely with my old friend Naoki Kokawa the disaster relief expert in the Japanese Red Cross. Somehow Kokawa-san is always in the middle of action so I sent him and email asking how he and his family are. 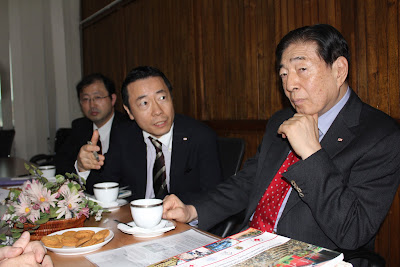 Mr. Konoe (right) President of the IFRC and his team when they recently visited  Sri Lanka. Left Kentaro Nagazumi, centre Yasuo Tanaka. Tanaka's Mother is in a critical condition. It will be these three who will be leading the Japanese Red Cross rescue, medical and relief services in the earthquake and tsunami operation. Three very experienced disaster men. Photo: Bob McKerrow.

Next I sent a note to my good friend Yasuo Tanaka, special advisor to the President of the IFRC. Yasuo lives in Geneva and when he got my message he was in CDG airport in Paris, waiting for a flight to Japan. He conveyed the sad news to me that his Mother is in a critical condition.and he is anxious to be at her bedside.
Later I found out she lives in Hokkaido, not far from the epicentre.

I also sent a note to Kentaro Nagazumi, pictured above, to enquire about the situation of his family and to ask him to convey my condolebces to the President of the IFRC and Japanese Red Cross, Tadateru Konoe. (photo above) I know that these three pictured above, and Naoki Kokawa will be playing key roles in this mammoth operation. Immediate news I got from Tokyo was that the Japanese Red Cross immediately began an assessment exercise from its national headquarters and at branch level, mobilizing its staff and volunteers. The National Society deployed 11 national disaster response teams to carry out assessments and provide first aid and healthcare in the affected areas. Emergency relief planning is underway. 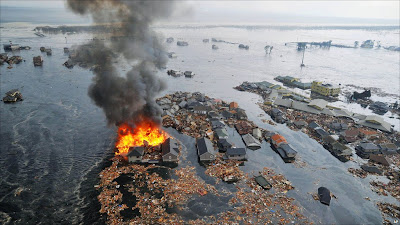 Fires broke out in cities along the coastline near the epicentre. BBC photo

Christchurch New Zealand and Japan's Miyagi and Fukushima prefectures which were the worst affected by the earthquake have much in common as they sit on the Ring of Fire. Both are crippled by earthquakes two and a half weeks apart. As I write a Tsunami warning is in force for most of the Pacific and my own country, New Zealand. See map below.

A tsunami warning was extended across the Pacific to New Zealand in the south and North and South America to the east.

Coastal areas in the Philippines, Hawaii and other Pacific islands were evacuated ahead of the tsunami's expected arrival. Below is a map of the estimated time of arrival.

Strong waves hit Japan's Miyagi and Fukushima prefectures, officials said, damaging dozens of coastal communities. Kyodo news agency said a 10-metre wave (33ft) struck the port of Sendai in Miyagi prefecture. Over the years I have worked in many of the world's deadliest earthquakes:

Motorists could be seen trying to speed away from the wall of water.
Farmland around Sendai was submerged and the waves pushed cars across the runway of the city's airport. Fires were burning in the city's centre.

My thoughts and prayers go out to all those who are trapped and injured in Japan, and my condolences to the families of those who have died. I know the Japanese Red Cross will do an outstanding job as they have a network of rescue teams, hospitals, and highly trained doctors and nurses that I have personally worked with some, and visited others on trips to Japan as guest of the Japanese Red Cross. 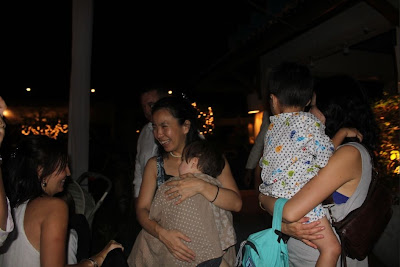 Just before I left the office tonight, Yuki came into my office and talked about her family and friends in Japan, and colleagues in the Japanese Red Cross. She was worried and helpless. It is a similar feeling I had when the Christchurch earthquake occured; you want to be back in your own country helping those affected.

Yuki (Yukimi) in the centre on New Year eve.

Update: This morning I got an email reply from Naoki Kokawa:

All are fine.  Thanks.  I was off yesterday at home when the earthquake hit.  There was no transport means yesterday to go to office, so I stayed home with my wife.  It was good, because aftershocks came almost every ten minutes throughout night.  My home is east side of Tokyo, meaning much closer to epi-center.  Anyway I am now in the office, staying overnight tonight, and might go disaster affected area tomorrow.
I also got a note from Kentaro Nagazumi saying his familiy,  the President IFRC, Tadateru Konoe and his amily and colleagues are all safe. He added, " We also hope that the difficulties of those affected by the earthquake in New Zealand will be alleviated as much as possible."
I found that a nive human touch.
Thanks to the BBC for access to maps:

Bob it is just horrific. Now that I have experienced a disaster you feel more involved with this but I can't even imagen the scale of this tragedy. I was wondering if things are getting worse but seen from your statistics there always have been devastating earthquakes. My heart goes out to the people in Japan. Take care marja

You are right Marja, when you have experienced a disaster yourself you are more understanding of what others are going through in similar situations. I too pray for thoses affected people in Japan.

Thanks for the update which illustrates the beautiful relationships between the Red Cross family. I hope Yasuo is able to see his mother and they are able to spend time together.

Your updates are particularly good for me because they take me back to the Red Cross world, that I yearn for so much. BTW, Patrick was on CNN a couple of hours ago...

That's great Patrick was on CNN. He's the best we have. aBsolutely brilliant in how he presents us.

Thanks for your feedback. Bob

Well, I do not really imagine it is likely to have effect.

Thanks for an concept, you sparked at thought from a angle
I hadn’t given thoguht to yet. Now lets see if I
can do something with it.

my weblog why am i not getting pregnant