Our work in Sri Lanka varies from supporting internally displaced people in the north, finishing many tsunami construction projects such as schools, hospitals and community facilities such as water supplies for the many housing estates we built, flood victims etc., but I never thought Red Cross would get involved with elephants. 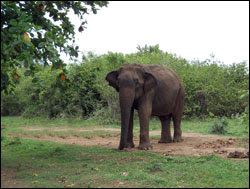 A wild elephant near Nugelanda village. The elephants have been forced out of their natural habitats as a result of illegal logging.


Tomorrow I am heading off to Ampara district to see the outstanding work of the Ampara branch of the Sri Lanka Red Cross  which ranges from a risk reduction programme protecting people from being killed by elephants and a huge water supply programme which is bringing clean water to over 250,000 people. With over 300 kims of pipeline, this programme costing almost US $ 10 million, has a large hygiene promotion programme for all the people benefitting from the clean water.

I am travelling with our Communications Manager, Mahieash Johnney who recently wrote this article which will give you an idea of how the Red Cross works in protecting people from elephants.

When the sun goes down for the day people in Nugelanda, Ampara, Sri Lanka, begins a battle, a battle against nature, a battle against a giant, a battle to stay alive. For over 10 years these people have shared the same space with the wild elephants and managed to co-exist while cultivating and living their lives.

However since the reserves in and around Nugelanda began to fall victim to illegal loggers and others who clear land for illegal cultivation, these wild jumbos began to move into areas where people inhabit.

During the months from August to October the invasion from wild elephants into Nugelanda village has increased drastically, due to the crop season for the paddy cultivated in the area. Once the villages harness their crops they store the paddy in their houses prior to selling. Wild elephants are attracted to the smell of paddy and invade the village in order to eat it and destroying everything that gets in its way.

Ranjani who is 38 years old has been living in the 39th Colony for over 15 years. They have witnessed the area go under the control of the LTTE and also the Government military’s offensive to clear the area.
Ranjani stands near the wall of her house that was crushed by a wild elephant, which resulted in the death of her mother.

They are no strangers to wild elephant attacks as the little hut they live in has in many times been crushed by several wild elephants, one of the many reasons for them to rebuild the hut with clay.

On the 15th of October 2010, after dinner all in Ranjani’s family squeezed into the hut in order to get some sleep. At around 11 in the night they heard as to something is passing by their house. Minutes later the left wall, the one which here mother was sleeping close to collapsed and a wild elephant crashed into the hut. Her feeble mother who was sleeping close by couldn’t even get up and run, before that the wild elephant put its paw and crushed her to death.

"It was a horrific experience to see such a wild animal inside our house. We didn’t even have time to help my mother, she was close to the wall the elephant crushed her in front of our eyes” said Ranjani with a tear in her eye.

At this moment everyone else in the house started to scream and managed to scare the elephant away. However it was too late for Ranjani’s mother, who was killed on the spot by the wild elephant. Two of her children were also severely injured when the wall fell over them.

With the reduction of their habitats elephant populations have broken up and some herds have got pocketed in small patches of jungle. With their movement restricted, especially when food and water resources are depleted, elephants wander into new cultivated areas, which were their former habitat, in search of food. Elephants find ready source of food in these cultivated areas, but wild elephants are unwelcome neighbors in agricultural areas.

This has often been viewed as the crux of the human-elephant conflict. Since 1950, a minimum of 4,200 elephants have perished in the wild as a direct result of the conflict between man and elephant in Sri Lanka. The conflict has escalated in the recent past. During the last twelve years alone, a total of 1,464 elephants were killed, with 672 humans being killed by elephants. (Data from Department of Wildlife Conservation)

In Nugelanda and in the 39th Colony around 13 people were killed the most recent have been a 17 year old boy who went to the market to buy fish. On his way home he met with a wild elephant that has smashed him on the road. He was hospitalized with severe injuries and later succumbed to them. 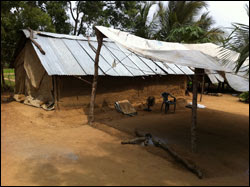 Nugelanda village has recently suffered an increase in elephant attacks, particularly during harvest time. Rice paddy is stored in houses before being sold. Elephants are attracted to the smell, and destroy everything that gets in their

Currently the Ampara branch of the Sri Lanka Red Cross Society has already begun helping these people to combat this treat of wild elephants. As an immediate measure due to the influx of threat of these wild beasts, they have begun to distribute a high powerful torches which has been the only effective solution in order to chase away the elephants.

“We are in the process of putting a more effective plan to work in these areas. Of course funding has been an issue. What we suggest is empowering the villages by giving them torch lights and also helping them to come up with a risk reduction plan by helping them to build store rooms so that the wild elephants will not break into the houses” says Nilanka Dissanayake, the Disaster Risk Reduction Programme Manager of Sri Lanka Red Cross Society’s Ampara branch.

Further on he said that the branch is also in conversation with the Wild Life Authority about an electric fence covering an area of 7km covering two villages, the Nugelanda village and the 39th Colony 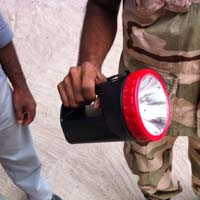 The Ampara branch of the Sri Lanka Red Cross Society has started to distribute a powerful torch which has proved the only effective way to chase away the elephants.

The Branch Executive Officer of the Ampara SLRCS branch Prashantha Udaya Kumara says “We know that there is much to do. Step by step we are helping these people to combat this crisis. We do have several obstacles to overcome, like finding proper funding for a task like this. However we will do the needful to help these vulnerable people”

Meanwhile the branch has also completed a disaster preparedness plan with the aid from German Red Cross covering 6 areas of the district looking into various disasters like flooding, drought, wild elephant attacks and ramifications of global warming. 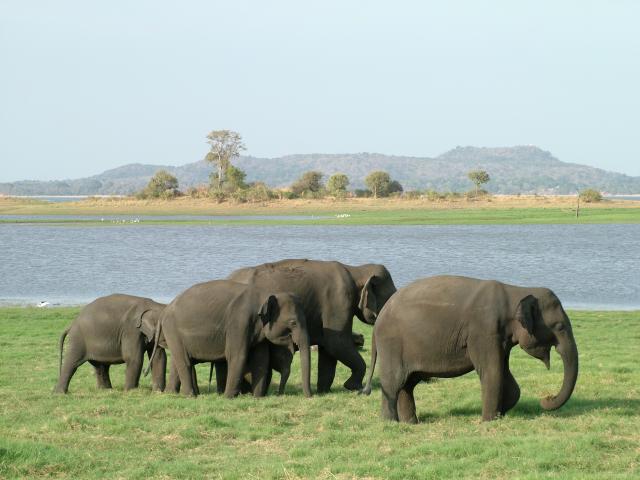 Wild elephants enjoy the space  and food to graze, well away from people. Your donations can help give elephants a better life, and help protect people who are regularly killed by elephant attacks.

Save the elephants, protect the people, donate now.

I will keep you posted on our visit to Ampara.
Posted by Bob McKerrow - Wayfarer at 22:19

Your job is indeed very varied. Makes me think of a story my brother told after his travels when he was young. He came eye to eye with a wild elephant when going through a bush in Thailand.
Luckily he was on a scooter and gave some extra gas to escape.

I love the variety in my work and to think that elephants and people are killing each other for their own survival. I believe this programme can let them all live in peace and dignity.

Good luck with sorting that out Bob.

Every human is special and priceless, but as a species we sure don't give others much room.

Hi, Neat post. There is an issue with your web site in internet explorer,
might test this? IE still is the market chief and
a huge element of folks will leave out your great writing due to
this problem.

Generally I do not learn article on blogs, however I would like to say that
this write-up very pressured me to try and do it!
Your writing style has been surprised me. Thank you, very great post.

Hi! I know this is kind of off topic but I was wondering if you knew where I could get a
captcha plugin for my comment form? I'm using the same blog platform as yours and I'm having difficulty finding one?
Thanks a lot!

Here is my web-site ... http://naturalcleanseblog.com

I visited several sites but the audio feature
for audio songs existing at this web page is truly superb.

Wow, this paragraph is pleasant, my younger sister is analyzing such
things, thus I am going to let know her.

Feel free to visit my web site - diet that works

If some one needs expert view about running a blog after that i propose him/her to go to see this
webpage, Keep up the pleasant job.

Unlike other companies that offer Write My College Papers Services, we cover a broader scope when receiving orders. We accept orders from varied fields of study such as law, medicine, engineering, hospitality, business, and many more. Our Write My College Papers Writers are the best and most beneficial to students and even lecturers who may require teaching material.

Are you looking for quality Already Written Essays writing help? Accounting and finance students are required to write Nursing Papers for Sale with authority and clarity. A good amount of time is spent in Non Plagiarized Essays.