From bullet holes to herb gardens 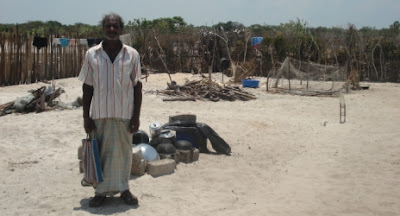 My Australian Red Cross colleague Nadeeks Arambewela recently visited Northern Province, Sri Lanka, and found hope in the most unlikely of places – a conflict and tsunami ravaged community who are ready to rebuild their lives. The Red Cross has a large integrated programme building 2000 houses, providing water and sanitation, livelihoods and first aid training.

An idyllic seaside village open to the clear waters of the Bay of Bengal framed by the occasional palm tree and glaringly white sand, Mamunai village in Sri Lanka is stunning. It’s the stuff of postcards, but despite its superficial beauty, Mamunai village cannot convincingly hide its battle scars. The evidence of a 30 year conflict and the destructive force of the 2004 tsunami that destroyed the entire village and killed so many, is everywhere.

The people who live here are desperately poor. Most of the villagers live in makeshift shelters; built with tin sheets and weaved palm fronds or tarpaulins provided by the Sri Lankan Government and non governmental organisations. The makeshift houses provide shelter, but no security and do little to keep a family cool in the searing heat.

The day we visit it’s hot; stinking hot. The air rising from the small tarmac road appears to tremble. The sun is unrelenting and our straw hats wilt in protest. 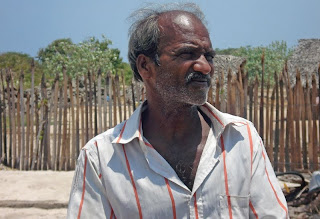 Despite the heat, Sivapalam Sundaram, (left) a local fisherman, walks barefoot across the burning sand to meet us along with some other village leaders. His weather-worn face glistens in the sun and his shock of white hair betrays his age. He says to me quietly: “We need help.”

This man – along with the rest of the village – has seen and been through things that most of us cannot even imagine. In our conversation he softly tells us of his time in the internally displaced person camp and the loss of his wife and one of his sons in the tsunami.

It’s people like Sivapalam and the villagers of Mamunai who have been through conflict and the devastation the tsunami that will be working with Australian Red Cross through the Post Conflict Recovery Program. Some 350 owner-driven (self-built?) houses in the Vadamarachchi East area will be funded alongside a livelihood component to strengthen the community’s resilience. It is anticipated that all the houses will be water tight by the end of this year, just before the monsoonal rains arrive.

We are given a tour of Sivapalam’s makeshift shelter where he lives with his son, daughter-in-law and grandchild. Its three rooms are delicately held together with dried palms that stand little chance of lasting through the rainy season.

The small kitchen garden roughly fencing in herbs and medicinal plants to the side of the house comes as a surprise. The plants appear strong and bold – a striking contrast to their surroundings. It’s perhaps a perfect analogy for the impact that the Post Conflict Recovery Program will have on this community.

During our visit, Sivapalam occasionally smiles gently but does not say much. When we get ready to leave, he reaches out to shake our hands and as he does, he says, “nandri” (thank you). It seems to carry the weight of a thousand words of hope, where until now there has been little.

Kia ora Bob Compared to the place you are christchurch is a luxery. The thing is the more comes across your path the better you can relate to the suffering of so many. Therefore I admire you so much to have the strenghth to do so much. I wish I could do that.

Each in our own way is making a difference. I read of the work you are doing in your community, in your work and that is impressive.

You are helping people devastated by an earthquake in our hometown. Keep up your good work.

I am not sure the place you are getting your info,
however great topic. I must spend a while learning more or figuring out
more. Thank you for fantastic information I was searching for this
information for my mission.

Here is my homepage: bed jumping

Wow, that's what I was seeking for, what a information! present here at this weblog, thanks admin of this site.

Feel free to surf to my web site; diet plans that work fast

Paragraph writing is also a excitement, if you be acquainted with afterward you can write or else it is
complex to write.

Wow, awesome blog format! How lengthy have you
ever been blogging for? you made blogging glance easy.
The whole look of your website is wonderful, as
neatly as the content material!

This is my first time go to see at here and i am truly impressed to read all at
alone place.

Take a look at my site; http://naturalcleanseblog.com

I am really impressed along with your writing abilities and also with the structure in your weblog.
Is that this a paid theme or did you customize it yourself?
Anyway keep up the nice high quality writing, it's rare to look a great weblog like this one nowadays..

Is Order Research Paper Services what you are looking for? The expertise of our professionals Argumentative Essay Writer allows them to successfully cover all areas of scholarly assignments in nearly all subject areas.