Love wasn't in the contract.

With Murray Jones the great New Zealand climber in Nepal.

Graeme Dingle describes their initial relationship, " Murray and I were strange bedfellows I think it's fair to say at this stage of our relationship we didn't even particularly like each other. Arguments came over little things of no consequencebut we were on a mission, and love wasn't in the contract." 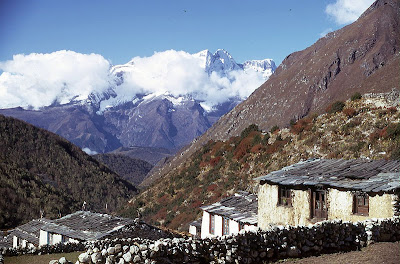 It was in the high Solo Khumbu that I met Murray Jones again in 1975 and I did a trip for a week with this world reknowned climber to have a look at the unclimbed peak, Kwandge. Photo: Bob McKerrow

I first met Murray Jones in 1965 when I joined the Otago Tramping and Mountaineering Club. A handsome guy, wiry and slightly built, with a scarred face, he was known as a hard man who Otago climbers whispered to me saying he would make an impact on NZ and world climbing. : 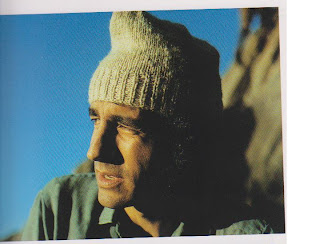 We both did a lot of climbing in 1966 to 68 but sadly, Murray's climbing partner Howard Laing was killed in a car accident in 1966. When we met again as two stoney broke climbers at the West Arm-Manapouri power project where we could earn big money to pay off previous climbing trips and dream of the new ones. I had just returned from Peru where I climbed for four months and was in debt and Murray was planning to join Graham Dingle on a climbing trip in Europe. We spent many pleasant evenings chatting about mountianeering and life while gazing at Fiordland's steep sided mountains from out huts. Murray spoke of his love for rock and I of my love for snow and ice. We talked of climbing together but our paths went different ways.

"The history of our Otago T&MC says this about Murray and I.

" A number of Club members who went south to the Antarctic during the '60s included Ken Gousmett, Keith McIvor, Bob McKerrow and Frank Graveson. A large number of members have tramped and toured overseas, with some distinguishing themselves on the climbing scene. Two names that spring to mind readily are Bob McKerrow and Murray Jones." 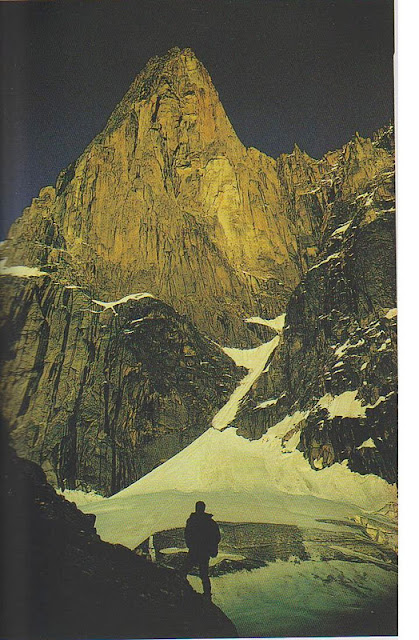 Murray Jones looking up at the western aspect of the Dru, one of the six north faces they climbed in a record one season (1969) in Europe.The Bonnati Pillar rises out of the top of the Dru Coloir , the big snow and ice gulley above Murray's head. The West Face is on the left. Photo: Graeme Dingle.


But our paths parted until we met in the Everest region of Nepal in 1975. Te Ara goes on to explain what Murray did shortly after he left Manapouri.

" New Zealanders first climbed in the European Alps in the 19th century, but made a significant mark only in 1969 when Murray Jones and Graeme Dingle climbed six major north faces in one season, proving that New Zealand’s best climbers were the equal of Europe’s."

Graeme Dingle describes their initial relationship, " Murray and I were strange bedfellows I think it's fair to say at this stage of our relationship we didn't even particularly like each other. Arguments came over little things of no consequencebut we were on a mission, and love wasn't in the contract."

They went on to form one of the greatest ever c;limbing partnerships.

In January 1975 I was seconded from the New Zealand Red Cross to work for the International Red Cross in Geneva. After three months I was asked to go to Nepal for an initial six months to set up a disaster preparedness programme in the remote districts of Nepal. " You may have to walk 5 or 6 days to get to remote mountain villages," said Olaf Stroh Secretary general of the Swedish Red Cross who were funding the programme. To a young mountaineer, being paid to work in the foothills of the Himalaya was a dream. I was based in Kathmandu and Murray, Joan and I spend quite a bit of time together. He was grieving over the loss of his girlfriend Vicki Thompson, who died some months earlier when attempting a 7000 metre peak in the Himalayas on an all women's expedition. Jill Tremain was also killed in the same incident. Then somewhere in the middle of the year Ed Hillary lost his wife and daughter in a plane crash at the Kathmandu airport. I was closeby at the time and heard the crash. Murray was one of a few close friends in Nepal that provided Ed a shoulder to lean on and help him work through his grief. Murray asked me a few times to pick Ed Hillary from the airport a few times when Murray was in Kathmandu and it was touching to see the way Murray reached out to comfort Ed.

After seven months in Nepal, my work had been done so I took three weeks leave in the Solo Kkumbu, under the shadow of Mt. Everest. I met Murray at the Khunde hospital and he suggested a trip to look at a unclimbed peak named Kwandge.

Kwangde Ri is also called Kongde Ri and Kwandge on various maps. This difficult mountain forms an impressive multi-summited ridge on the eastern end of the Lumding Himal, which in turn can be regarded as part of the Rolwaling Himal. Rising south-west of Namche Bazaar above the Bhote Kosi river, the mountain's northern flank forms an impressive barrier that throws down several steep ridges to the north.

I got fit by doing a trip up to Everest Base Camp and climbing Kalar Patar, an easy day climb that is on the ridge to Pumori and overlooks Everest and all the high peaks.

Murray suggested we take with us two of the staff working at the Khunde hospital a Sherpani called Domalay and Neema Sherpa. 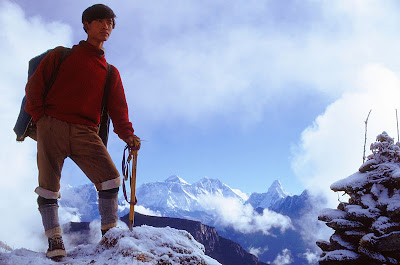 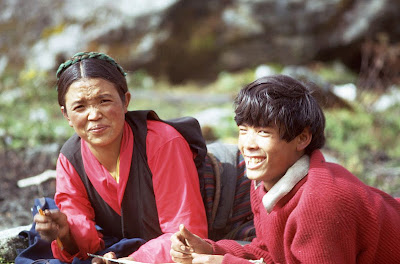 Domalay and Neema enjoying a break on the trip. Photo: Bob McKerrow 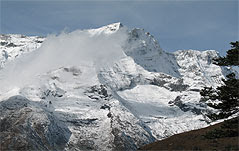 When we left Khunde on about 14 October 1975, Kwandge was an unclimbed peak.  Three days later when we arrived we met Prince Bikram Shah who informed us that his expedition had just done the first ascent of Kwangde Lho by an all Nepalese expedition The actual summit was reached on 17 October by Lhakpa Tenzing. Sonam Gyalzen, Shambhu Tamang and Sonam Hisi via the South Ridge.
This was a magnificent achievement and thwarted any ambitions we had of doing a first ascent. We had basic mountaineering equipment and our only hope would have been an alpine style ascent. Althought we didn't have a permit for the peak, Bikram Shah invited us onto the mountain by 'Royal Command: and we climbed up to camp two and had a good look at the mountain. Sadly, Bikram Shah and his wife who I worked with in the Nepal Red Cross, Princess Sharada Shah, were murdered in the Royal Family massacre some years back. 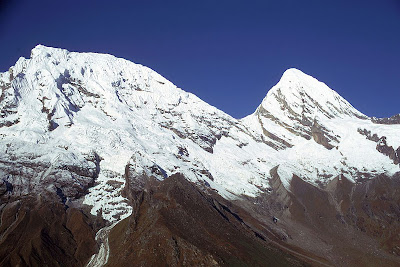 A shot I took of Kwandge in October 1975. Photo: Bob McKerrow
Spending a week with Murray Jones was a privilige as I learnt so much about mountaineering, his climbs in NZ, Europe and the Himalaya. He was a humble man and I liked the way he treated the Sherpas as absolute equals. We exchanged postcards, sometimes Christmas cards for some years than we lost contact. over the years. He built a house along Sherpa designs in Bannockburn Central Otago.
Before I met Murray he had lost a brother who was riding a bicycle in Dunedin and was killed by a drunk driver, and shortly after we left Nepal, his younger brother Alan also a mountaineer, was killed climbing in the NZ Alps. 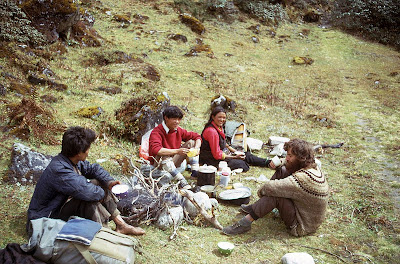 Murray Jones (right), Domalay, Neema and a porter cooking a meal at our camp under Kwandge. Photo: Bob McKerrow
In August 2006 when I was living in New Delhi, I was trying to contact Murray and wrote to Graeme Dingle and was greatly amused by his reply:" As far as I know Jones he still lives in Bannockburm doesn't have an email but he does drive a Porsche.

I am going back to New Zealand for holidays at Christmas time and I will make an effort to locate Murray Jones again.  We have a lot to reminisce over.
. 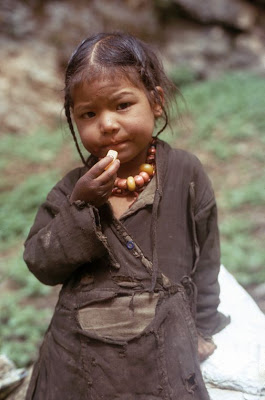 Below are some shots I took on my trip to everest Base Camp. 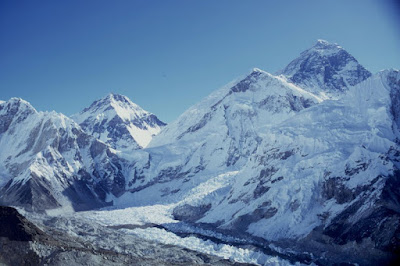 Everest and the west ridge from Kalar Patar. On the way up I met Chris Bonnington, Doug Scott  and Charles Clarke after their successful south face route on Mt. Everest. Back in Kathmandu I met Reinhold Messner, and helped the 1975 New Zealand Jannu Expedition which included climbing greats such as Pete Farrell, Don Cowie, Lyn Crawford, Graeme Dingle, 'Limbo' Thomson and Jim Strang so it was a wonderful time for a young mountaineer. Photo: Bob McKerrow 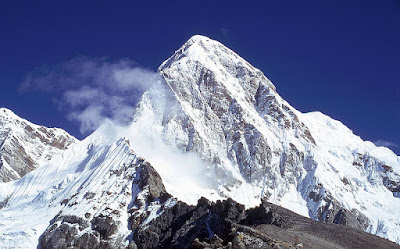 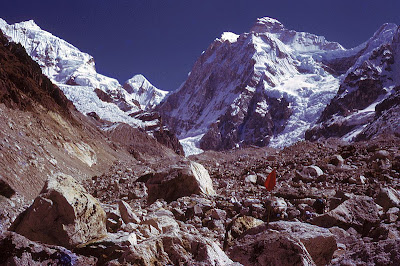 Heading up towards Everest Base Camp: Photo: Bob McKerrow 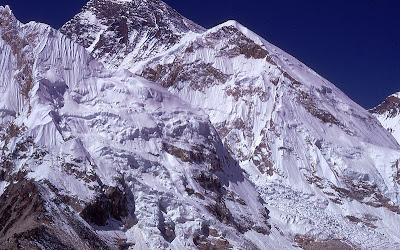 One of the reasons I went up on the ridge of Pumori in 1975 was to take photographs of the West Ridge of Everest and the Lho La route as a group of New Zealanders had got permission to climb Everest in 1977. I spent a lot of time photographing and examining the West Ridge of Everest. Photo: Bob McKerrow
All photos were taken on the old Kodachrome 25 ASA. Great film that was!
Posted by Bob McKerrow - Wayfarer at 22:45

Hi Bob You've quite some stories to tell. What jumps out for me is that you have build quite some special relationships along the way and have seen the most beautiful parts of the world.
Arohanui marja

I enjoyed researching this article so much as it took me back in time to when I was 19, and younger, with not a care in the world. Had I died climbing a big mountain in a foreign country, it would not have mattered. We were young, able and smuggled our talents away and hawked them on livelier markets.

Kia Ora Robb, and greetings from Gurgaon in India.

When I return to NZ next month I will be looking up Murray, Kim Logan, Donald and a lot of other mountain men women. " Bring me men to match my mountains."

Did you catch up with Jude Terpstra in Wanaka?

Your way of describing all in this article is really good,
every one be capable of simply know it, Thanks a lot.