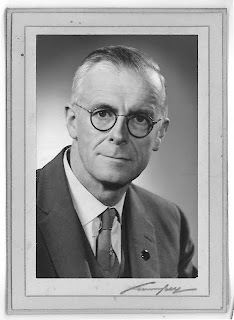 Warrington signed all his cheques, trust account and personal, with the proviso that they be paid provided we weren’t all destroyed by nuclear explosion, and every year at our Annual Meeting of Otago Lawyers, he would politely seek permission to introduce a motion relating to nuclear disarmament only to be told that it was not relevant to the business of the Annual Meeting, a ruling he always accepted with dignity and good grace.(quote from Iain Galloway)

I just wish Warrington Taylor was still alive to be able to attend the Red Cross and Red Crescent Movement Council of Delegates yesterday in Geneva, 26 November 2011, where a paper was presented drawing upon the testimony of atomic bomb survivors, the experience of the Japan Red Cross and ICRC in assisting the victims of the atomic bomb blasts in Hiroshima and Nagasaki and the knowledge gained through the ongoing treatment of survivors by the Japanese Red Cross Atomic Bomb Survivors Hospitals, The paper  Working towards the elimination of nuclear weapons  focusses on the following key issues:

#deeply concerned about the destructive power of nuclear weapons, the unspeakable human

#suffering they cause, the difficulty of controlling their effects in space and time, the threat

#they pose to the environment and to future generations and the risks of escalation theycreate,

#concerned also by the continued retention of tens of thousands of nuclear warheads, the proliferation of such weapons and the constant risk that they could again be used,
#disturbed by the serious implications of any use of nuclear weapons for humanitarian
assistance activities and food production over wide areas of the world,

#believing that the existence of nuclear weapons raises profound questions about the extent
of suffering that humans are willing to inflict, or to permit, in warfare,Working towards the elimination of nuclear weapons
I am so proud the the Red Cross and Red Crescent Movement is taking these issues up to the highest levels of Government and appeals to all States:

Warrington Taylor would have cried out with joy in support had he been alive to see the meeting yesterday as he led a lonely campaign in the 1950 and 1960s against the use of nuclear weapons.when most considered him a crank.
He was a friend and mentor of mine when I was a teenager and into my early 20s when I first started working for Red Cross overseas.. What moved me about this man was his compassion and an undying belief that the world should be a better place. He was a key figure in the Dunedin branch of the CND, Campaign for Nuclear Disarmament and campaigned vigorously for banning the nuclear bomb.He fought against the Dunedin City Council when they made plans to scrap trolley buses, and in 1960 ,he stood as an independent candidate for the Dunedin Central electorate in our general parliamentary elections on the nuclear disarmament platform. Warrington Taylor was a fighter for human rights, truth and a better world.
I first met Warrington Taylor in about 1961. He was a tall, handsome man about 60, with a gentle manner and a warm smile. I was a 13 year old athlete and his son Brian had just started coaching me. Somehow I was drawn to Warrington Taylor as he had qualities I had not found in many people up until then. His general knowldege was astounding from geography to mechanics, law to philosophy, religion to nuclear power, politics to people. In a suit and tie he had the stature of a Statesmen and in his old working clothes, which included worn trousers, brown shoes, a shirt and tie, and a tweed jacket, he still looked like a Statesman.
When he spoke, his words were clear, well chosen and soft. He ran a law firm in Dunedin from an old office in Princess Street, near the Embassy theatre. I loved going into his office and watching him write legal briefs on quarto sheets of paper, which he tied with green tape when completed. When I was at High School I popped in to see him a few times, and this busy lawyer would always welcome me with a broad smile, with at least one gold tooth.
I think he took a liking to me and we often used to sit down together at his crib at Karitane, and tell me about trips he did in Europe as a young man. He talked of the Swiss Alps, the river journeys and going to famous places such as art galleries and museums, but the conversation would always swing to nuclear disarmament.
In 1965 when the Beatles visited Duedin, Warrington joined his son Brian and I and he  enjoyed their performance immensely. Most adults of his age were condemning the Beatles as anti-establihment, but not Mr. Taylor. He could see the good in these people and like the lyrics that often promoted peace and love.
Warrington Taylor was a man for all seasons. He was equally at home in a law court, or repairing his old car or lawn mower. His innate ability to break subjects down into component parts, and rebuild arguments or cases, was a technique he used when repairing motors.
I feel that Warrington Taylor was one of those men that somehow the media ignored. Never into self promotion, he quietly did his works behind the scene. I wonder how many clients he did work for and he never charged them ?

The paper  working towards the elimination of nuclear weapons http://www.standcom.ch/council_post_docs_2011.shtml  appeals to all states  to:
.- to ensure that nuclear weapons are never again used, regardless of their views on the
legality of such weapons,

- to pursue in good faith and conclude with urgency and determination negotiations to
prohibit the use of and completely eliminate nuclear weapons through a legally binding
international agreement, based on existing commitments and international obligations,

Warrington Taylor, I dedicate these powerful statements to you as a man who mentored me.to follow the path of humanity and human rights.
Posted by Bob McKerrow - Wayfarer at 18:50

hey Bob what fantastic words to describe my Father whom I adored.
I too followed him whole heartedly in his beliefs and philosophies.

I think his knowledge of wars was so great that he condemmed them as a useless waste of human lives.

I was going out with a guy who wanted to become a soldier and fight in Vietnam.So I asked him to come up home and talk to Dad who tried in vain to stop him from going.
The Army Brainwashed them so much that we could not change his mind.So he went and a week later he was dead what a useless waste of a young life.We were all so sad.

Dad would have held a party when Davis Lange declaired NZ "Nuclear Free Zone" and I'm sure he knows.

He was indeed a "Man before his Time" and I miss him so much.
Ross misses him too because they woould do the dishes after tea and spend ages putting the world to right.

I too was at that Concert when the Beatles came to Dunedin and the only thing that annoyed him was the girls screaming.He asked me why and all I could say was that they were excited.In a very matter of fact way he said "We would be able to hear a lot better if they were not screaming."

He waas also very involved in the "Regemt Theatre" and spent many hours working for them and Mum too helped in Fundraising.

I could go on for ever sharing memories of the kind things my Father did but not sure if this is the right format to.

Do you want my email address?
Is this a safe format to send it on?

Wonderful to hear from you and to read more of the amazing things your Dad did. So you were with me at the Beatles concert. We did many thangs together but we were a male dominated group and you on the outer. But I di recall enjoying your company and friendship although my focus was on tunning and more running. This article is also posted on the Warrington Taylor Blog so you may like to repeat your comments there as that is his home now. I hope you will take time to write more about your Dad and if you have any photos, I would love to post them there.
With love and all good wishes.