Did our letter to President Obama make a difference? 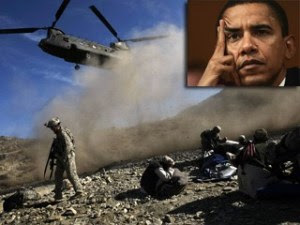 Amid fresh concerns over the safety of American forces, President Barack Obama says the accidental burning of Korans in Afghanistan and the retaliatory killings of US troops gave new credence to the need to end the war.

I am wondering if the letter I, and a group of writers and experts on Afghanistan wrote to Obama of December 17, 2010, had any influence on him. See letter below or this link. To the President of the United States:  December 17, 2010


"I think that it is an indication of the challenges in that environment, and it's an indication that now is the time for us to transition," Obama said during a White House news conference.

Obama announced no speeding up of the NATO-backed plan to end combat missions in Afghanistan at the end of 2014, saying "that continues to be the plan". But he said the violence aimed at Americans in Afghanistan that followed the accidental burning of Korans on a US base was "unacceptable".

Six Americans were killed in retaliatory violence. Obama offered his apologies to Afghan President Hamid Karzai, a move that was roundly criticised by his Republican presidential rivals as weak and unnecessary.

From Congress, Obama was getting tugged from another direction. A letter calling for Obama to accelerate the withdrawal of US troops from Afghanistan had the backing of 23 senators, mostly Democrats but including two conservative Republicans, Sens. Mike Lee of Utah and Rand Paul of Kentucky.

Sen. Max Baucus, D-Mont., who circulated the letter with Sen. Jeff Merkley, D-Ore., said in a statement that there "something fundamentally wrong with spending (US)$88 billion for national building in Afghanistan while we're asking Americans to make tough cuts here at home."

HERE IS THE LETTER WE WROTE TO PRESIDENT OBAMA.

We have been engaged and working inside Afghanistan, some of us for decades, as academics, experts and members of non-governmental organisations. Today we are deeply worried about the current course of the war and the lack of credible scenarios for the future. The cost of the war is now over $120 billion per year for the United States alone.

This is unsustainable in the long run. In addition, human losses are increasing. Over 680 soldiers from the international coalition – along with hundreds of Afghans – have died this year in Afghanistan, and the year is not yet over. We appeal to you to use the unparalleled resources and influence which the United States now brings to bear in Afghanistan to achieve that longed-for peace.

Despite these huge costs, the situation on the ground is much worse than a year ago because the Taliban insurgency has made progress across the country. It is now very difficult to work outside the cities or even move around Afghanistan by road. The insurgents have built momentum, exploiting the shortcomings of the Afghan government and the mistakes of the coalition. The Taliban today are now a national movement with a serious presence in the north and the west of the country. Foreign bases are completely isolated from their local environment and unable to protect the population. Foreign forces have by now been in Afghanistan longer than the Soviet Red Army.

Politically, the settlement resulting from the 2001 intervention is unsustainable because the constituencies of whom the Taliban are the most violent expression are not represented, and because the highly centralised constitution goes against the grain of Afghan tradition, for example in specifying national elections in fourteen of the next twenty years.

The operations in the south of Afghanistan, in Kandahar and in Helmand provinces are not going well. What was supposed to be a population-centred strategy is now a full-scale military campaign causing civilian casualties and destruction of property. Night raids have become the main weapon to eliminate suspected Taliban, but much of the Afghan population sees these methods as illegitimate. Due to the violence of the military operations, we are losing the battle for hearts and minds in the Pashtun countryside, with a direct effect on the sustainability of the war. These measures, beyond their debatable military results, foster grievance. With Pakistan’s active support for the Taliban, it is not realistic to bet on a military solution. Drone strikes in Pakistan have a marginal effect on the insurgency but are destabilising Pakistan. The losses of the insurgency are compensated by new recruits who are often more radical than their predecessors.

The military campaign is suppressing, locally and temporarily, the symptoms of the disease, but fails to offer a cure. Military action may produce local and temporary improvements in security, but those improvements are neither going to last nor be replicable in the vast areas not garrisoned by Western forces without a political settlement.

The 2014 deadline to put the Afghan National Army in command of security is not realistic. Considering the quick disappearance of the state structure at a district level, it is difficult to envision a strong army standing alone without any other state institutions around. Like it or not, the Taliban are a long-term part of the Afghan political landscape, and we need to try and negotiate with them in order to reach a diplomatic settlement. The Taliban’s leadership has indicated its willingness to negotiate, and it is in our interests to talk to them. In fact, the Taliban are primarily concerned about the future of Afghanistan and not – contrary to what some may think – a broader global Islamic jihad. Their links with al-Qaeda – which is not, in any case, in Afghanistan any more – are weak. We need to at least try to seriously explore the possibility of a political settlement in which the Taliban are part of the Afghan political system. The negotiations with the insurgents could be extended to all groups in Afghanistan and regional powers.

The current contacts between the Karzai government and the Taliban are not enough. The United States must take the initiative to start negotiations with the insurgents and frame the discussion in such a way that American security interests are taken into account. In addition, from the point of view of Afghanistan’s most vulnerable populations – women and ethnic minorities, for instance – as well as with respect to the limited but real gains made since 2001, it is better to negotiate now rather than later, since the Taliban will likely be stronger next year. This is why we ask you to sanction and support a direct dialogue and negotiation with the Afghan Taliban leadership residing in Pakistan. A ceasefire and the return of the insurgency leadership in Afghanistan could be part of a de-escalation process leading to a coalition government. Without any chance for a military victory, the current policy will put the United States in a very difficult position.

For a process of political negotiation to have a chance of addressing the significant core grievances and political inequalities it must occur on multiple levels – among the countries that neighbour Afghanistan as well as down to the provincial and subdistrict. These various tables around which negotiations need to be held are important to reinforce the message – and the reality – that discussions about Afghanistan’s political future must include all parties and not just be a quick-fix deal with members of the insurgency.

We believe that mediation can help achieve a settlement which brings peace to Afghanistan, enables the Taliban to become a responsible actor in the Afghan political order, ensures that Afghanistan cannot be used as a base for international terrorism, protects the Afghan people’s hard-won freedoms, helps stabilise the region, renders the large scale presence of international troops in Afghanistan unnecessary and provides the basis of an enduring relationship between Afghanistan and the international community. All the political and diplomatic ingenuity that the United States can muster will be required to achieve this positive outcome. It is time to implement an alternative strategy that would allow the United States to exit Afghanistan while safeguarding its legitimate security interests.

Robert Abdul Hayy Darr Author of The Spy of the Heart and humanitarian aid worker in Afghanistan during the 1980s and early 1990s.

David B. Edwards Anthropologist (Williams College) and author of Before Taliban

Antonio Giustozzi Author of Koran, Kalashnikov and Laptop and editor of Decoding the New Taliban

Felix Kuehn Kandahar-based writer/researcher, co-editor of My Life With the Taliban

Bob McKerrow Author of Mountains of our Minds – Afghanistan

Ahmed Rashid Journalist and author of Taliban and Descent into Chaos

Alex Strick van Linschoten Kandahar-based writer/researcher, co-editor of My Life With the Taliban

Jere van Dyk Author of In Afghanistan and Captive

Email ThisBlogThis!Share to TwitterShare to FacebookShare to Pinterest
Labels: Afghan writers, An Open Letter to President Obama, US troops in Afghanistan

wow, Thats great, its good to know being a pashtoon that their are people who think the same what we are thinking. very very very great effort, being a pashtoon i salute and appreciate all the writers of this letter. i dont know how much it will affect the policy maker of US or Mr President but i can assure you that the words which is written in this letter will be golen words of history and where people of tomarrow talking about the great power and will discuss how they fall. ther will be some one to tell that there were few great people whom worn them about the coming situation. its late but not too late. great efforts by all the wirters and special thanks to the great man i know and i am proud that once i served under that great man in 2005 earth quake, Thanks Bob McKerrow.

You should be very proud to be a Pashtoon, for they are generally brave warriors and some good cricketers too.

I feel it is important we as writers speak out because our travels and research give us a better understanding of Afghanistan than most politicians. It was a pleasure to work with you in 2005.

It is very sobering to think that the coalition forces have now been in Afghanistan longer than the Red Army. Time unfortunately goes quickly and can not be taken back.

I hope it is not too late for a negotiated settlement which protects the rights of women and minorities to be reached, but am unsure as to whether this is currently the priority.

Congratulations on your new grandchild, I hope she is able to visit a peaceful Afghanistan when she is old enough to travel.

Jamie, I sincerely hope my grand daughter can visit a united and peaceful Afghanistan. We were critcal of the Red Army, and is there anything to prove this lot is better?