Haunting memories of children with legs and arms blown off by landmines.

One memory haunts me, from 1995 in a hospital ward at Kharte Se hospital in Afghanistan that was run by the ICRC. At least 50 children/teenagers who had legs, hands, feet and legs blown off by landmines during the past few days, had to, twice a day, dip and then soak their freshly severed stump into plastic bags of iodine, to ensure the flesh and bone was clean before operating. The plastic bag would be held by a relative or parent. The first to dip their bloody stump would pierce the air with lachrymose scream of death and as each child being forced to dip their stumps, sometime having lost two legs and an arm, the screaming built up to build up to a crescendo for two to three minutes. 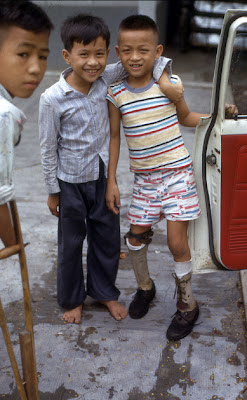 Left: 3 boys who were victims of landmines at a Red Cross orthopaedic centre in saigon, Vietnam 1971. The boy on the right lost both legs.

I first came across landmine victims in 1971 on my first assignment for Red Cross in Vietnam, and when I went back again in 1973-74, we had surgeons who were able to operate on the victims of landmines.


On the occasion of the International Day for Mine Awareness and Assistance in Mine Action, 4 April, the International Committee of the Red Cross (ICRC) is once again calling for increased action to end the suffering caused by weapons that keep on killing and devastating lives long after the fighting has ended..

The ICRC director-general expressed regret that mines and other explosive hazards are not only a legacy of wars long past but also pose a threat from recent conflicts. In Libya, for example, explosive remnants of war are inhibiting the return of people to their homes, as well as slowing post-conflict reconstruction. Although the conflict lasted less than a year, the clearance of these weapons will go on for a long time to come.

The suffering caused by landmines and other unexploded munitions could be greatly reduced if all States joined and fully implemented the international humanitarian law treaties that seek to address the problems caused by these weapons, namely the Anti-Personnel Mine-Ban Convention, the Convention on Cluster Munitions and the Protocol on Explosive Remnants of War. 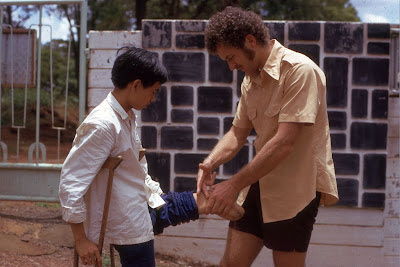 Dr. Paul Sutherland an outstanding surgeon who worked for our New Zealand Red Cross team in the highlands of Vietnam in 1973-74, often did surgical work on victims of landmines. Photo: Bob McKerrow


"While the existing legal framework is a substantial achievement in itself, further investment in its implementation is essential if the humanitarian objectives are to be achieved," said Mr Daccord. In particular, there is a real need to enhance support for people who have been harmed by mines and other lethal remnants of war. They require life-long access to medical, physical rehabilitation and psychological services, as well as assistance in regaining their place in society.

"States need to step up their efforts to destroy stockpiled mines and cluster munitions and to increase the pace of clearance," he said. "In many places, casualty data collection needs to be improved and national implementing legislation to enforce treaty obligations still needs to be adopted."

Email ThisBlogThis!Share to TwitterShare to FacebookShare to Pinterest
Labels: Dr Paul Sutherland NZ, International Day for Mine Awareness and Assistance in Mine Action, landmines, Landmines in Afghanistan, landmines in Vietnam, Red Cross and landmines